New Years Day and the radicalism of U2

I play this song every year on New Years day. There is a bit of unlove for U2 on the left I am part of. And with some, serious musicians. U2 fans and detractors, stay with this...

I spent a lot of time being annoyed with Bono between 2005 until well, I suppose, now. My reasons were because of his interventions in the Scottish G8  at the time (though Geldof's were much worse) and also for finding out his accountants were actively finding ways for U2 plc to avoid tax... So much for poverty intervention. Also, a few years ago he was on Wogan, playing their then new single (which was mince- something about Boots) and he berated an audience member for having the gall not to dance to the bilge he was performing.

Before I was won over by U2, I was a U2 cynic. I've written elsewhere about the incredible fandom the group built in Ireland and the USA in the early to mid eighties. People I knew took fandom to lengths it really never have went to. I always thought expressions of fandom were weird, twee, to the point that when I once bought a Joy Division teeshirt in the early eighties, i rarely wore it "out," and it lay in my wardrobe for years... A dirty secret. Labels and writing on shirts were a no no for me.

Fandom went on all around me, but not particularly in my house. My family liked music, but we weren't prone to screaming when singers or bands came on the telly. I took my music very seriously... I was an uneducated, but avid reader of a teenager, and lots of bands seemed to be saying things that were important. For someone who didn't go to university (until much later into my adulthood), and didn't come from a middle class, bookish family (though thanks mum for introducing me to the Library and comics!), the music press, and the music columns in newspapers were a huge part of my education... Springboards to the media, politics, issues.

Like everything in life, this was influenced by many factors. We weren't a religious family, but as a young person and a teenager, I went to church. And I was "Confirmed" into the Anglican Church of Ireland in Tullylish, which to me marked my right to say, "Im not going," every Sunday morning. There is a lot about this that makes me sad, not least it meant one less day I had contact with my Grandparents who lived in the beautiful, ancient, leafy townland of Tullylish. Stretching your teenaged self, rebelling, in retrospect, really was without realising, damaging, at times only to yourself. Anyway, the Anglican Minister at the time, The Rev David Coe, used to encourage me to read at the front of the church, and we went to ecumenical conferences, youth trips and the like. And it was at one of these events, someone from Christian Aid spoke about Aparthied. I immediately signed up to their newsletters, which arrived with regularity, outlining attrocities and the awful injustices in South Africa. And at these events, I learned more about CND than their representation in the media. Rejection of church didn't stop me from embracing CND, and the anti aparthied movements, and I remember as a young teenager sending for a UN report on South Africa. I was sent three reports, one on S. A, one on racism against the native Australian peoples and one on Ireland North and South. I devoured them. And joined CND, Greenpeace and Amnesty International. And as these influences on my politics were taking hold, music seemed to reflect the politics of peace, anti Thatcherism, Anti-aparthied, anti racism etc.

There is a famous line in the comedy series, "The Young Ones" from the time, (TV, alternative comedy and satire at the time was also very much shouting about the awful systems and killings of Thatcherite and Reaganite capitalism, and the awful shit happening in South Africa and in Ireland). "I shall write to the lead singer of Echo and the Bunnymen…" a statement that summed up, I suppose, the po facedness of lots of British Alternative/Indie music at the time.

The seriousness, the political importance fans and the bands placed in what they sang about probably was a bit of an open goal for, satirists (Echo and the Bunnymen were not a particularly political band , though years later I did hear of their support for working class causes in Liverpool from a few Militant members and leaders from the time), but what this really signified was young people singing about and highlighting the destruction of their own communities by the awful bomb thrown into their midst by Thatcher and her thugs, who broke it all apart, squeezed as much profit from it and in the process, smashed communities that were glued together hundreds of years ago. In these days of privately educated, middle class stage school british pop stars, try to remember that the eighties were dominated by working class bands who cut their teeth in working class pubs and clubs.  The poshos have taken our media, and our mass cultural expression.

Any song that protested the awful, unjust things in the world was part of my education that took me away from the blind loyalty to a Kingdom with an unelected Queen, and a government that took our industries and decently paid, unionised work from us. And away from a culture that flew flags celebrating massacres around a dead Empire and cheered tit for tat bombings, murder and mayhem (I'll quickly add, my immediate family were very much against, and cursed the awful thuggery going on around us, but supposedly in our name).

In 1983 I stretched my legs further into pubs and clubs, and one of those pubs was The Coach Bar. The Coach was one of those, what I now realise was rare, mixing places in Northern Ireland that my town had an abundance of. Another was the Technical College I dossed in for a year, where my best friends were from the "other community."

My first mixing with catholics had happened years before, when as a child my best friend was the great Micky Neeson, who had taught me what bigotry meant, and so many other things. My second friendship across these barricades that really were only in peoples heads, was with Thomas Moore. "Tam" was a U2 fan. And around us at "The Tech," were Duran Duran fans, Two Tone fans, punk fans, Adam and the Ants fans, etc. I was an anti fan, disparaging them all, expressing my rebellion in my anti fandom of Joy Division, early po faced New Order and focussing on the political messages of various bands and movements rather than the want to join any youth tribe. A cynical fool, really.

And I remember seeing the "New Years Day," video in The Coach bar, which had embraced the new tech of a video jukebox. The video, the lyrics seemed to be important, as did their horse back flown white flags. And in a majority Unionist town, a video jukebox that played a song by a Dublin band called "Sunday Bloody Sunday," with those word's connotations in recent Northern Ireland and early twentieth century Dublin history, really did seem in some way radical. 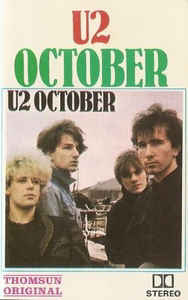 {Found on the rainy winter streets of Belfast, 1984}

Around this time, on either a clothes and record buying trip to Belfast or on my way home from work in the City Centre (winter 1984), I found a cassette album of U2's second album, October on a footpath. I played the thing to death. Bono said of the album in 2005,

"Influences, primarily Joy Division, Invisible Girls. A great example of how you can write a song and not know what you're writing about. A song called 'Tomorrow' is a detailed account of my mother's funeral. But I had no idea when I was writing it."

And that sadness, heavy atmosphere really was there and fitted with my internal seriousness (a seriousness I kept well hidden at the weekends and on my nights out!). Lyrics that made me think, and drum laden tracks and muted, echoey guitars, and Bono's voice crying, pleading, and using language bands didn't use. Language of the religion I had rejected.

Then came "Pride, in the name of Love." A track with more education attached... And a track that again had me in the local library reading about Martin Luther King after reading brief synopsis' of his life in the music press. The video (there were two), of the band recording in Slane Castle also appealed to my love of history, the old. Buildings seeped with lives and meanings that created the place I lived in, and the echo in the jangly guitar, seemed to merge with the chill of the big historical house and the down at heel charm of Dublin. I bought the album The Unforgettable Fire, which also coincided with my first, eye opening visit to the amazing, beautiful, historical, cosmopolitan (much more than Belfast and Banbridge!) Irish capital.

{The Slane Castle, Pride in the name of Love video.. The one that hooked me...}

In 1985 I prepared for my first go at the Cooperation North Maracycle. A cycle from Belfast to Dublin, across an army and police and guerilla army danger zone. A friend, Nigel Kerrigan and I practised around the County Down and County Louth coasts. And we found out that our overnight stay in Dublin (cycling back to Belfast the next day), coincided with U2 playing in the famous, historical Croke Park. We joined thousands of cyclists with varying levels of expertise, and cycled, cheering and waving across the border as if it didn't exist, and, knackered after 103 miles, made our way to our first stadium gig. And what a gig. More than that, I met Thomas Moore and a big contingent from Banbridge on the way out… A mixed crowd (catholic and protestant) wearing U2 bandanas, linking arms and singing. And that image seared itself into my memory. A band singing about peace, and anti racism , and about political ideas that at that time in the twentieth century, in that place, were giving the finger to the fear generated by the politics of division, hate and murder. 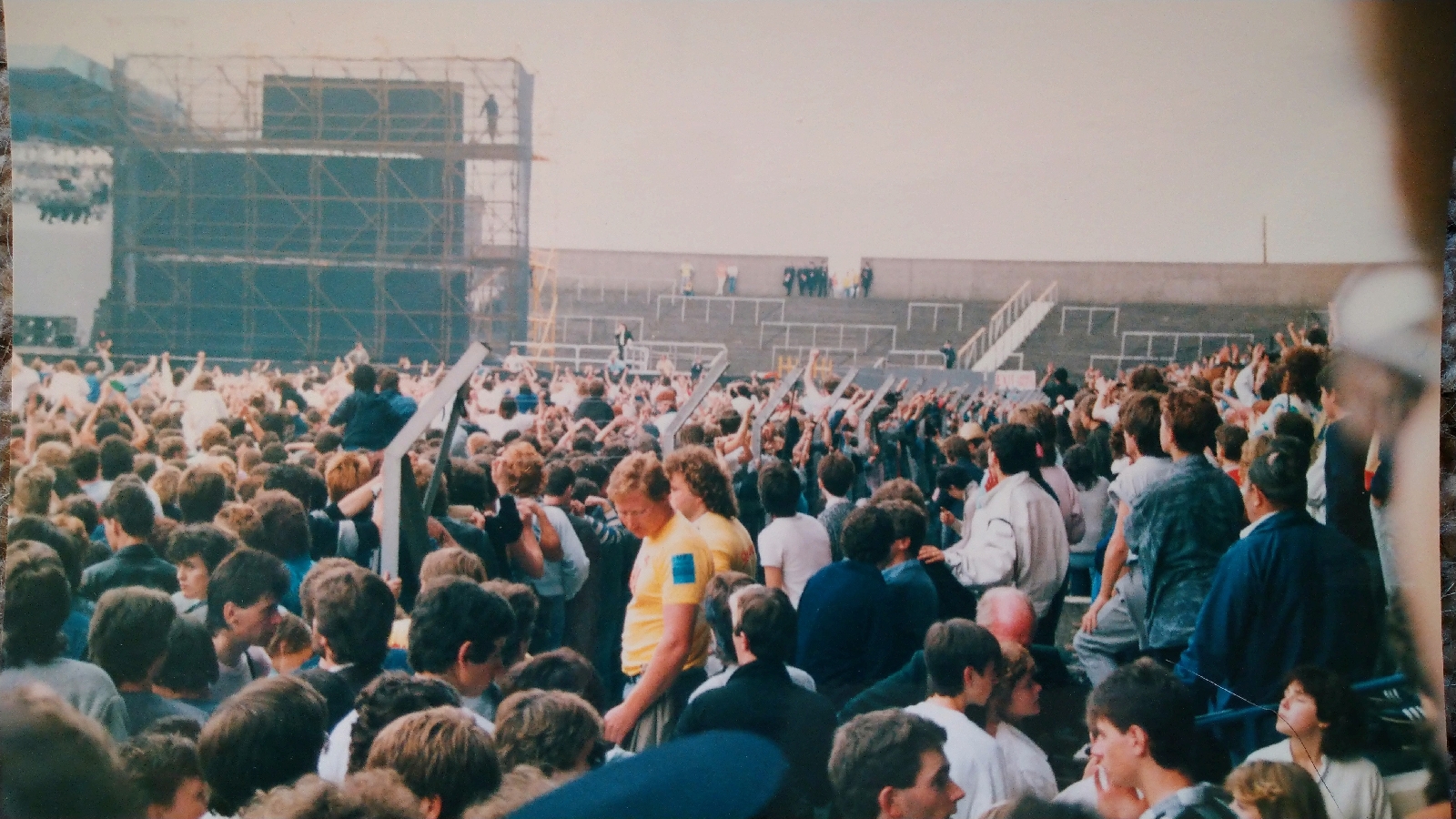 {These four photos are all I can find of the Concert. Pre selfie days. Pre being able to lug a large zoom lense about. And in days when each frame of film cost me money!} 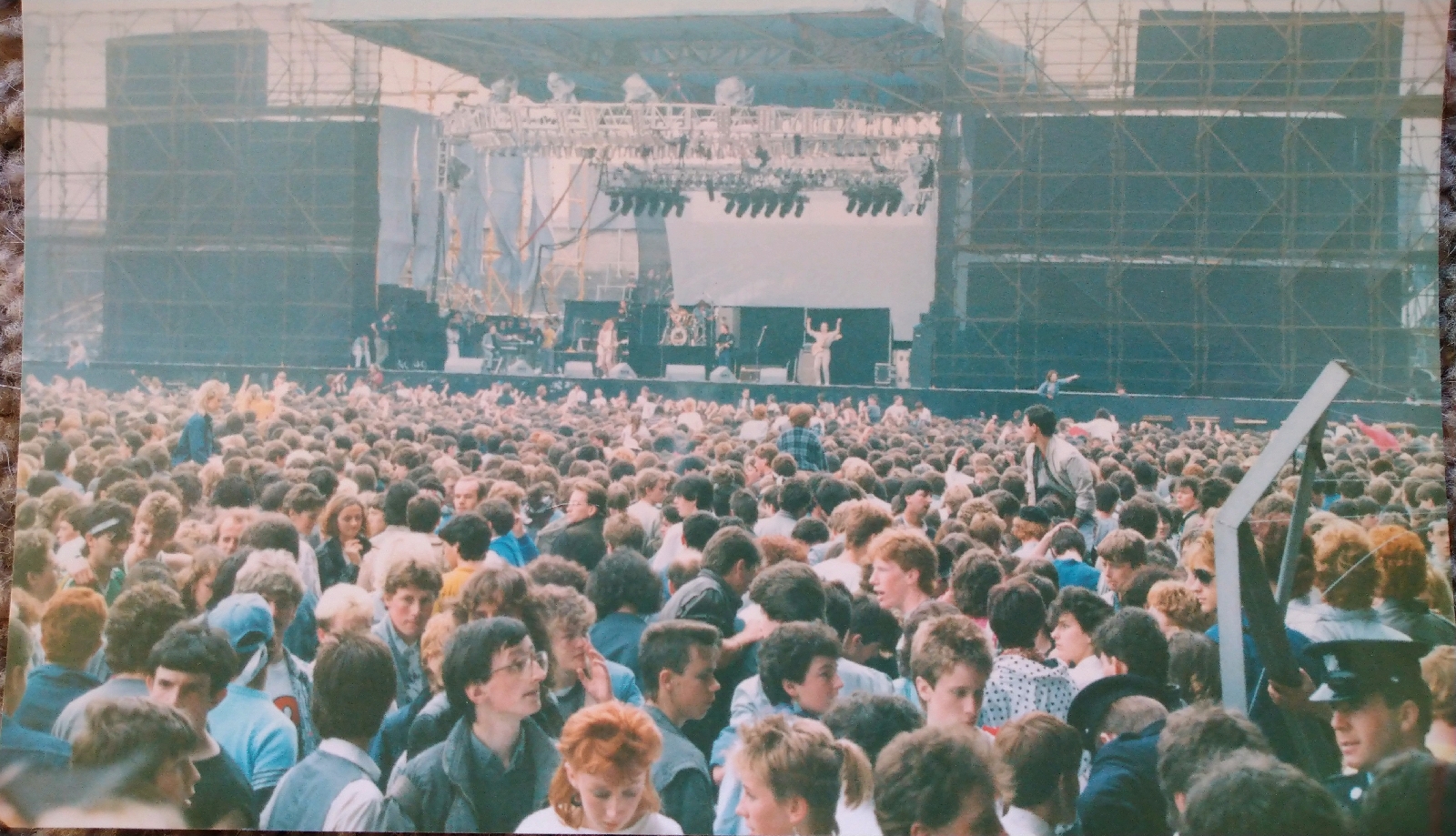 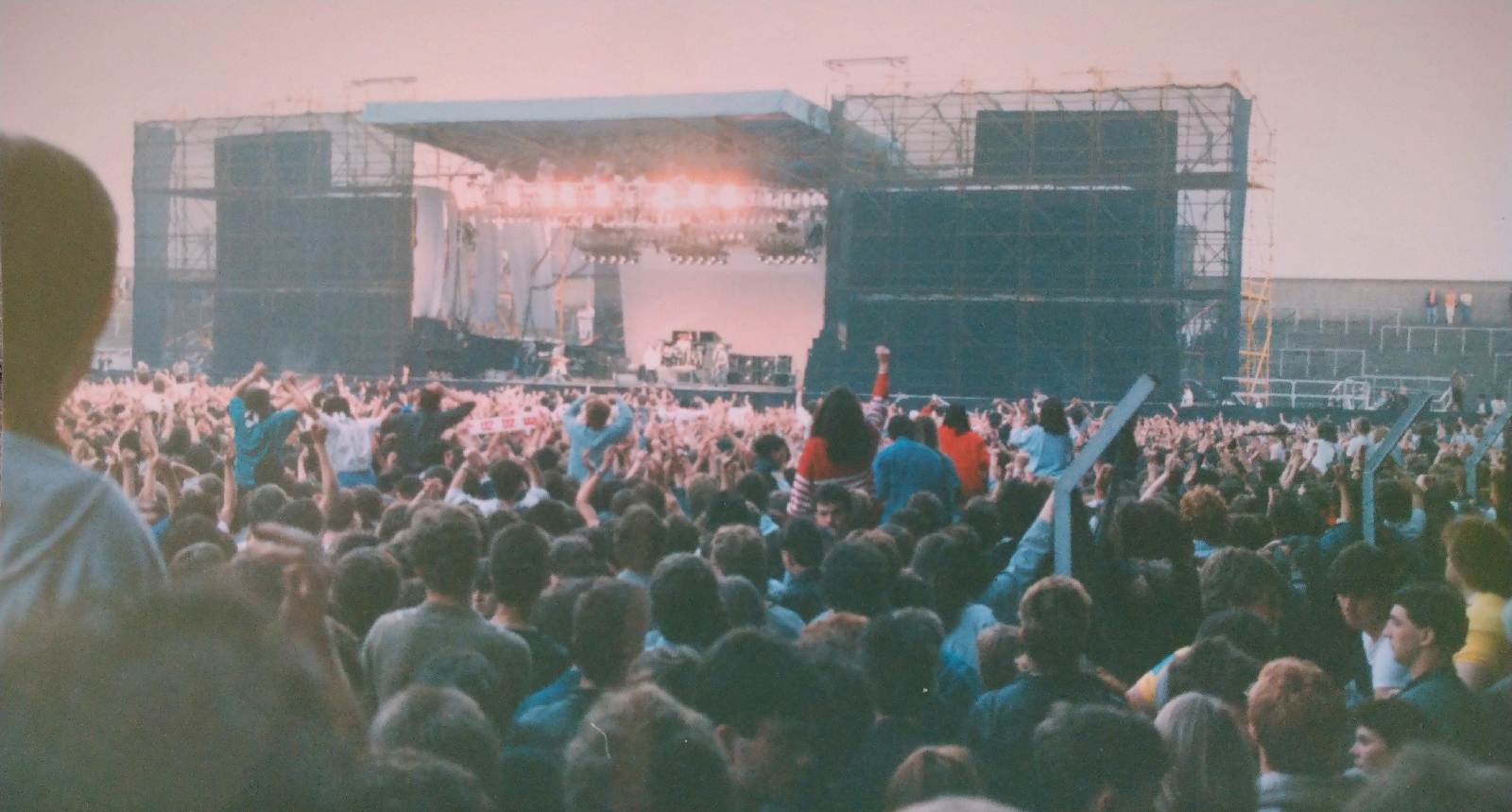 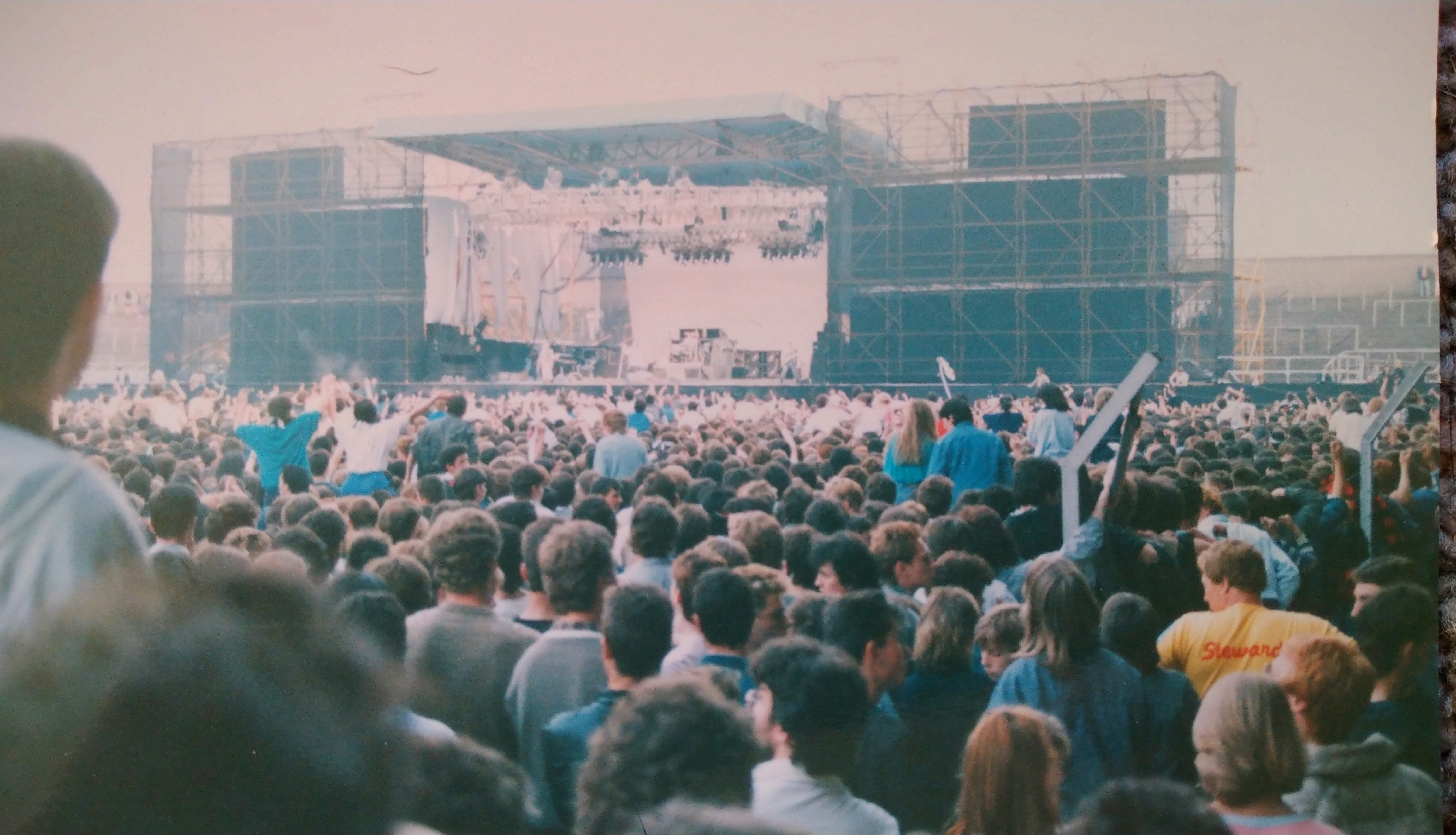 Other bands brought communities together in Ireland, Stiff Little Fingers, The Pogues (which always surprised me) The Undertones, the wonderful Sinead O'Connor, and others… But none on the same scale as the pomp of, and seemingly ego driven, U2.

So aye, Bono and U2 have annoyed me with their submersion in the hegemony that brought us awful neoliberalism, a system that had idealists compromising with the worst aspects of American, interventionist war making capitalism, but I always feel that what U2 did for Northern Ireland really over rides their naivety on the global political stage. A naivety I understand completely as of course, we all make political mistakes in trying to make the world a better place.

If you are playing this piece of pomp stadium rock, I recommend the album version over the single. And I recommend you think about Thomas Moore, a catholic from Northern Ireland, linking arms in 1985 with a knackered protestant, singing "In the name of Love," outside the place where the original Bloody Sunday took place.

Labels: Banbridge, the coach, the troubles, u2