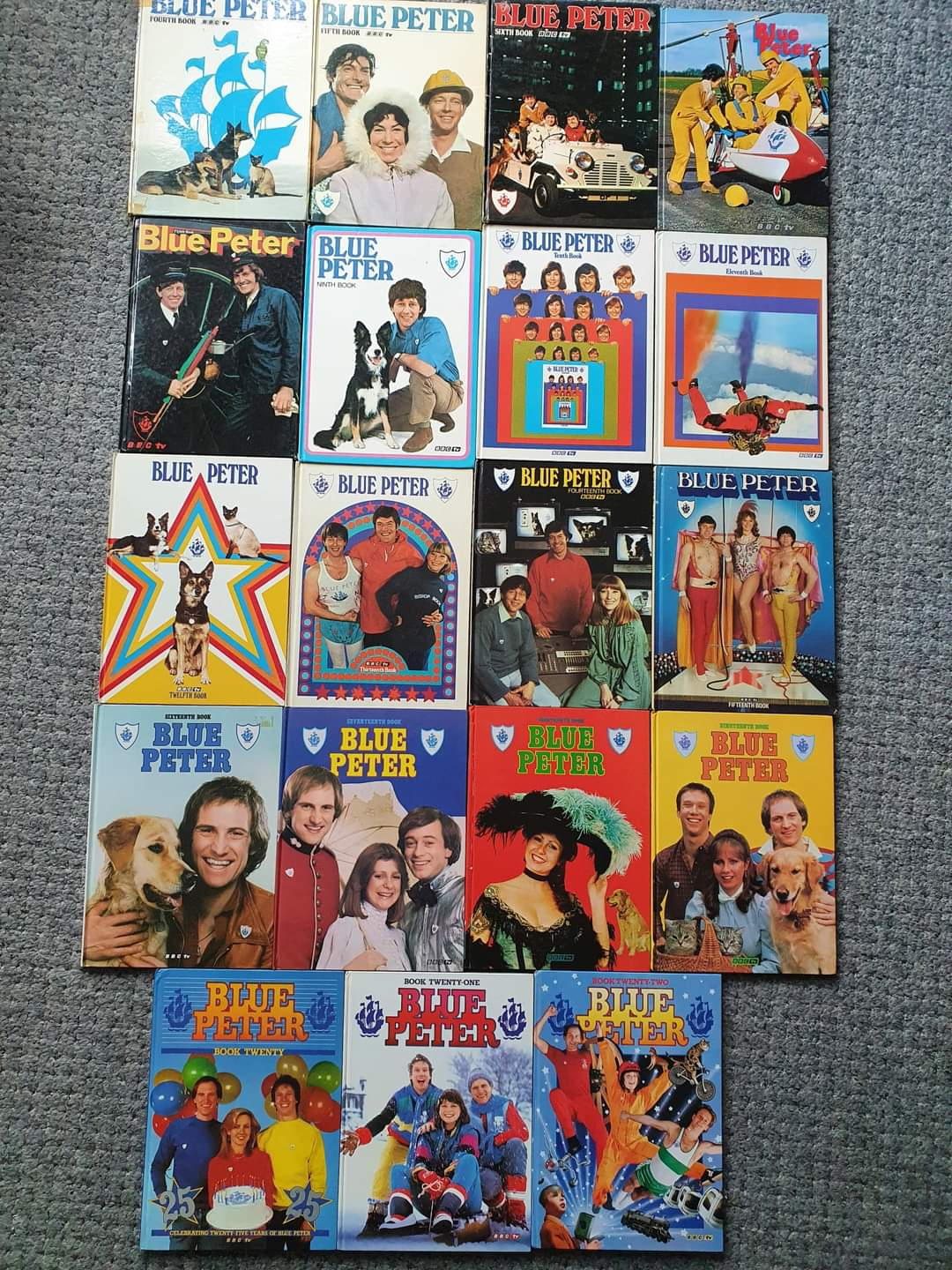 Someone posted this picture of their collection of Blue Peter Annuals on Facebook today.
Nowadays, I'm definately more interested in old comics and musical and cultural and personal vomiting on social media, than today's very broken politics (though, I'm not completely divorced from the political bubbles and commentary on events).
I had some of the earlier, 1970's Blue Peter books. They, like Look and Learn, and the Magpie annual, were superb kids books, arriving on Christmas day, full of photos of the previous year in kids BBC telly/cultural history, and of things to make and do. Their arrival, was a small event in the massive one of a Christmas day full of Rolf Harris, Jimmy Saville (christ, what were they doing to us?), Chitty Chitty Bang Bang, Top of the Pops, Doctor Who, Morecombe and Wise, Mike Yarwood, Christmas dinner at nanny and granda's , with my great great aunts Emily and Martha with their false teeth sitting beside them, visits to Granny and Granda in Tullylish, and my cousins Ian and Brenda and Aunt Marjorie and Uncle Jackie. 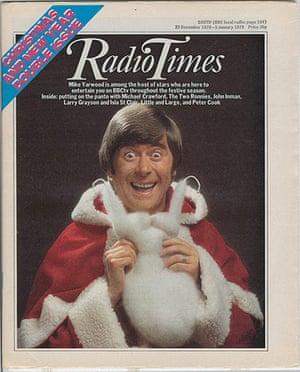 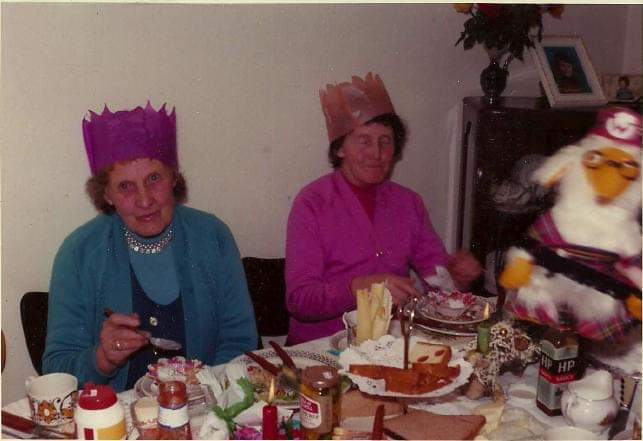 {Emily and Martha, teeth hidden, being photobombed by my Christmas TV tie-in Uncle Bulgaria...}
The main toys would be visually stroked and played with and the Annuals, Beano, Warlord, Look and Learn, etc, were night time reading on the bedroom floor, in the landing light cast across the floor through the crack from the partially open door.
Every Blue Peter annual marked something culturally new, not least the change in the programme's personnel.
Its strange looking back at them, and remembering those change of personnel. Val leaving; the dogs dying; the gorgeous, "modern" Lesley Judd; the hybernating tortoise;  vandals in the garden; Percy Thrower getting his gold Blue Peter badge; Bring and buy sales; Totalisers; Christmas coathanger candle decirations; loo roll Tracy Island; John Noakes doing mad, impossibly brave things and Peter Duncan appearing naked on stage in the Opera House Belfast, and me and my friends laughing at the Paisleyites demonstrating outside as we queued up... Blue Peter, indirectly helping me challenge parts of my community that there was a fear around challenging- and moving from childhood to adulthood. This event is virtually impossible to find references to on the Internet, and Duncans tackle never made it into any annual, but it was an event that had many people of my generation lining up to push through, kick back at, the fascist intimidation from religious, sectarian zealots who were determined to keep culture under a kind of 17th century lock and key. An event my friends and I went on to replicate when we cleared Portadown Town Hall of Paisleyite protestors during a masterbation scene in our interpretation as Acting Strange Theatre Company, of "Once a Catholic." 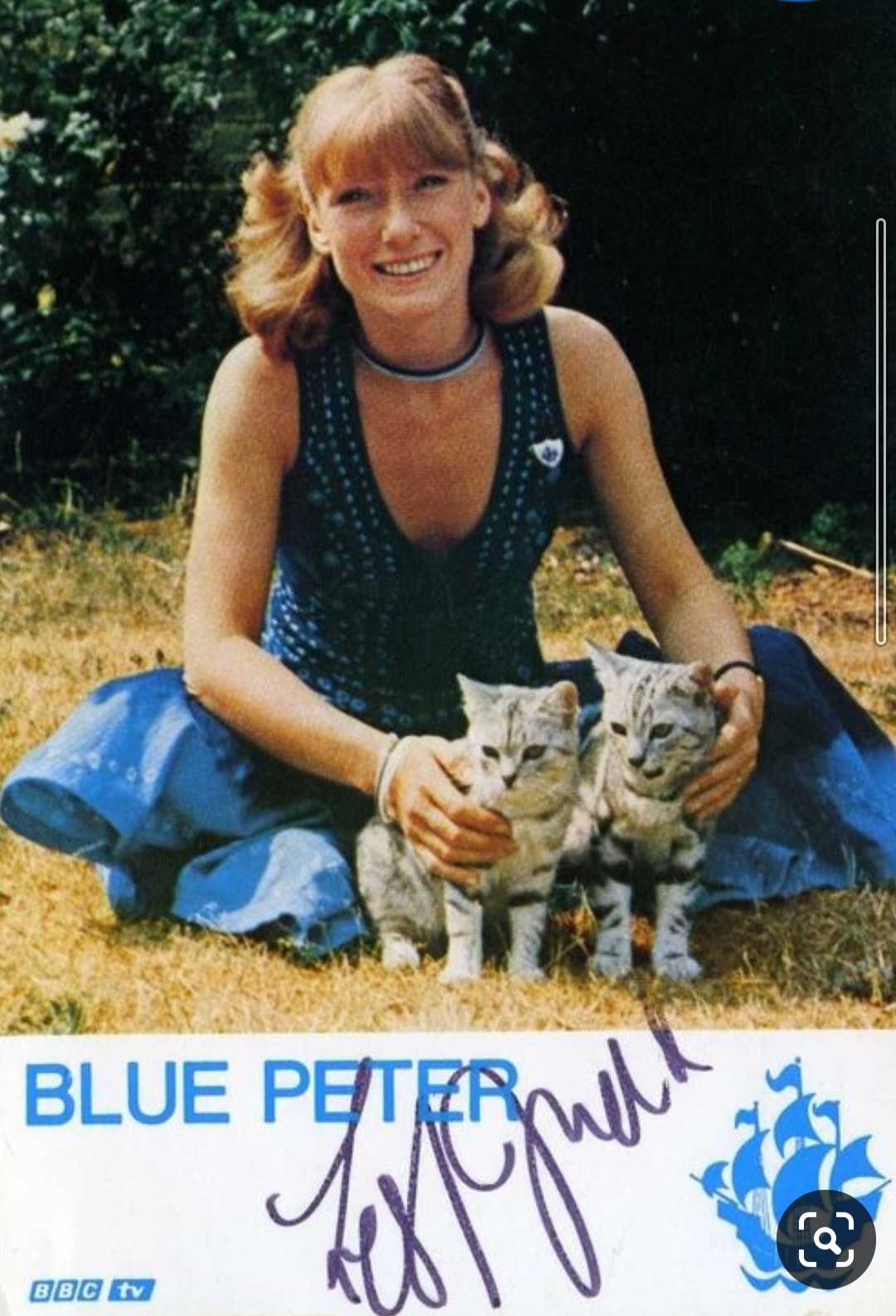 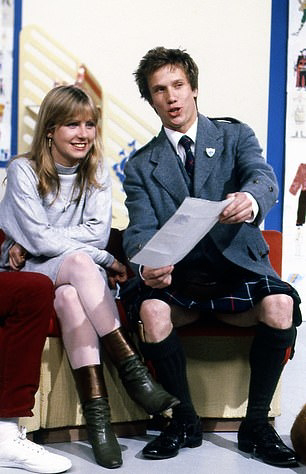 {seeing Peter Duncan's tackle from the front row of the Belfast Opera House with Paisley's followers bellowing in froathing fascism outside, was two fingers at childhood and at those who lived around us who wanted us to live in the 17th century}
Blue Peter cultural landmarks in my early, pre-internet life, that really today would be seen as meaningless (the equivalent Duncan nude controversies probably on par with YouTubers selling dodgy stuff or saying something fascist).
   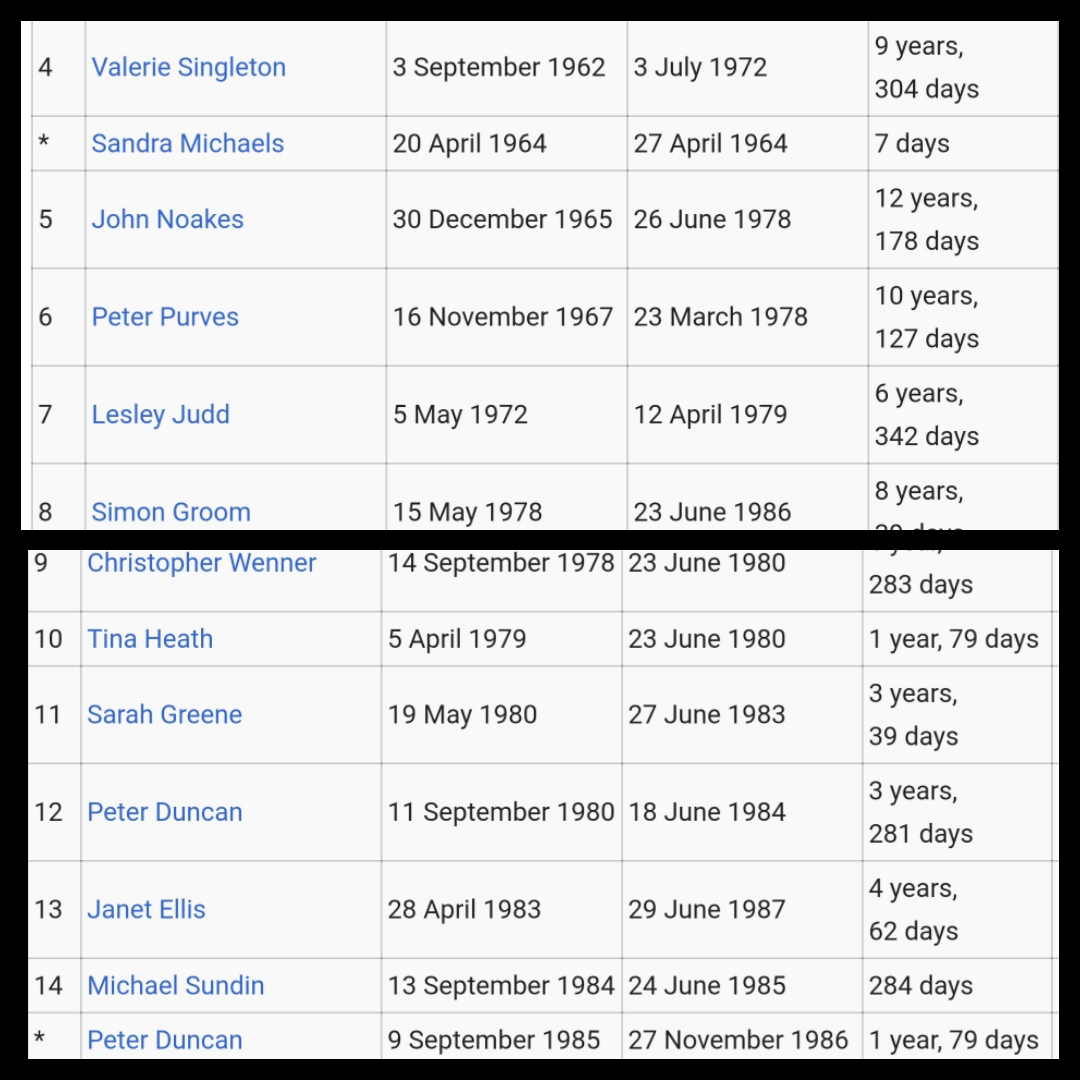 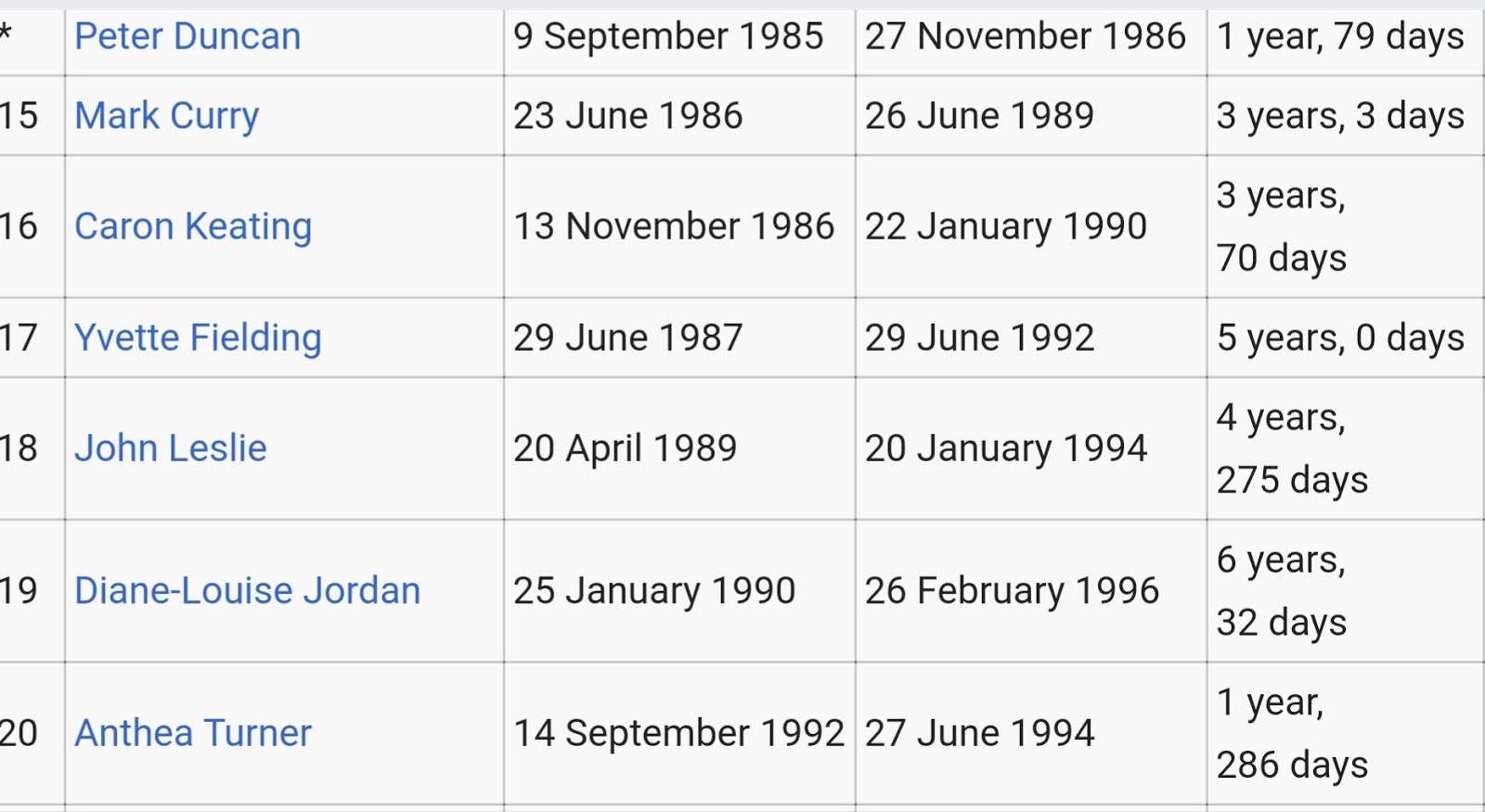 {How many young people nowadays notices a new Blue Peter (or any TV) presenter? Pre-Internet, all of these names made it into our popular culture...}
These landmarks were I suppose, because childrens TV was such a small, almost afterthought aspect of general life, disseminated via TV and in particular, the BBC; but its smallness was massive to us. 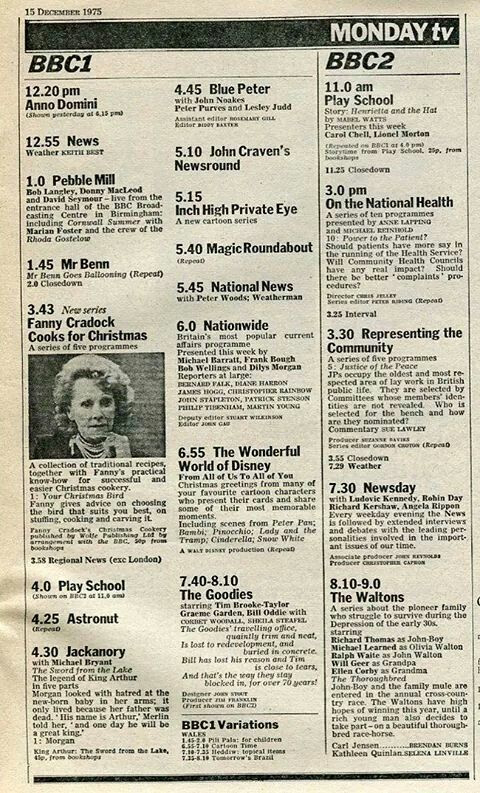 It was something that adults didn't sit and watch with us as they were making the dinner or negotiating bombscares on the way home in the Belfast rush hour. John Craven's Newsround, then Blue Peter and then some other "decent, relaxing" programme like a cartoon, or Grange Hill, then Roobarb and Custard... A perfect hour (Play School and Jackanory were never my thing after the age of five or six...) It was "watercooler" culture that united us, that was created for us... Even if it was just the post teatime, "Magpie is better than posh Blue, Peter," snash up the tree at the end of our road. 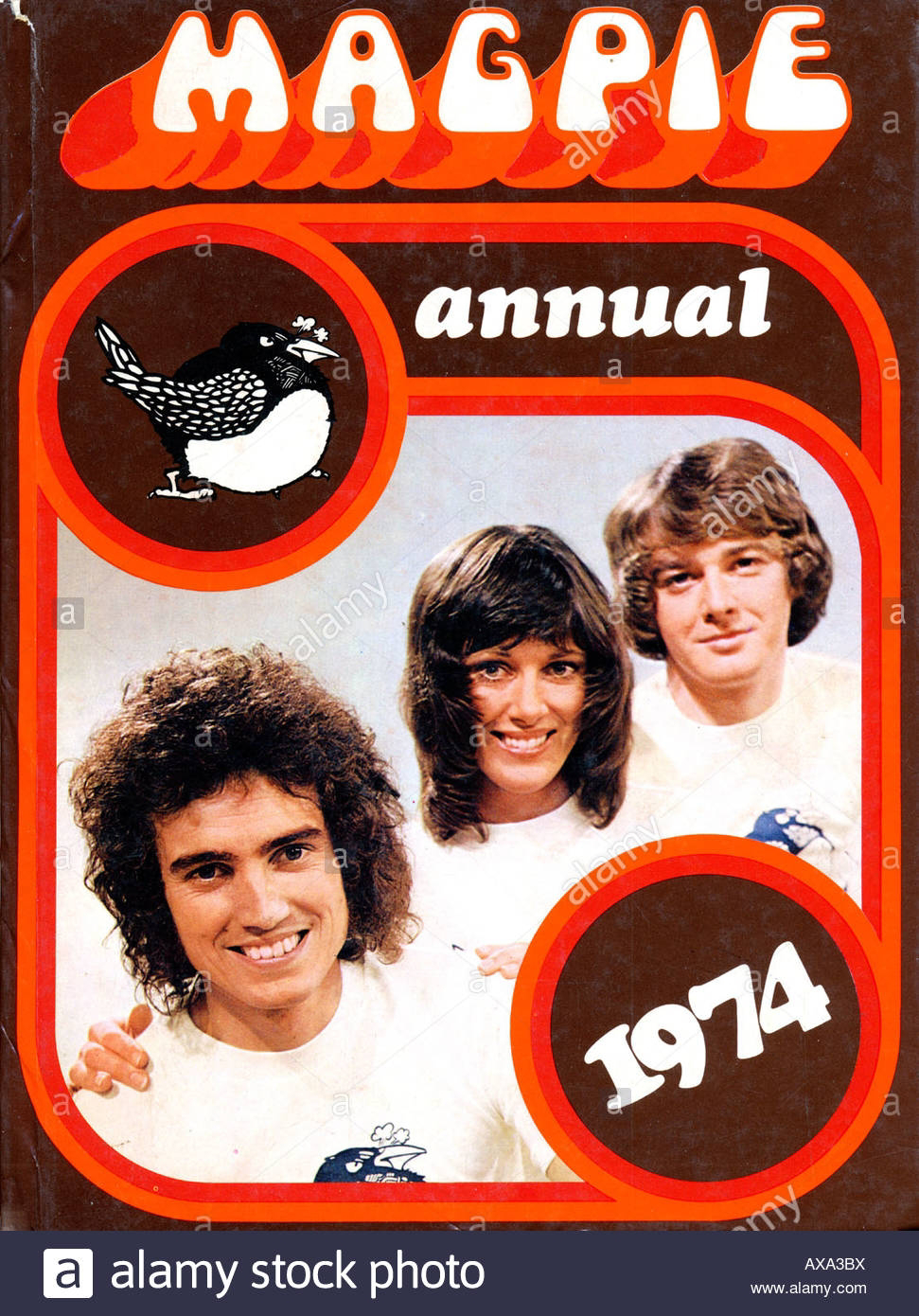 Changes in Blue Peter teams and the events; {Cambodia bring and buy sales all over the uk, for  example, a political event that really would not pass the odd "BBC balance" test that our current hegemonic gate keepers use to allow fascists like little nazi Farage on our screens shouting at, dehumanising and demonising refugees who are endangering their lives to escape war, poverty, and imprisoned lives}; had a much bigger, but subjectively similar impact of new editions of a top ranking computer game nowadays.
Every segment of kids tv, and early evening family viewing from 4pm-9pm were cultural events, the likes of which we dont have any more. Like the slightly later in life indie music and teenage gangs /style in the eighties.
Is the world like that now?
Will kids remember as cultural landmarks in their lives, every new design of the football skips sold at them bi-annually? or new iPhone? or the new "set" design their favourite youtuber lounges or dances and sells across?
Kids TV was not designed to sell toys in those days. We werent seen as a market. And in fact, there was a huge debate about advertising toys during kids programmes. Unlike today, when the programme is one long advert. I did have a Monkeys car, A Sooty puppet and a Pluto puppet, a Starskey and Hutch and Kojak car (hardly kids tv), a bionic man and a Fonz... All offshoots of telly programmes, rather than products designed to be characters in formulaic episodes.
These Blue Peter annuals represent a time when kids tv wasn't sold at us... But was there to entertain and educate. Nowadays, teaching in school, children talk of the brand or the computer game... All parts of a marketing strategy that takes precedence over the cultural phenomena. Marketing that creates forgettable phenomena.
I think the cultural world we have created for our kids is really not as safe or healthy as the world we left behind in the seventies (though the physical world is, undoubtedly safer). Todays indoor, broadcasted culture has much more going on, but most of it is a sales pitch... creating markets. Not caring or nurturing. It is a world in which kids cultural phenomena are more about selling stuff, and rarely about helping victims of despotic regimes, or cleaning pigeon shit from atop Nelson's Column, swinging on old ropes.
Greta Thunberg is an exception, but one that was disapeared when covid-19 came to town, and kids are now obsessing over the £100 Burberry mask they desperately need.
These annuals are superb markers of a time we wanted to create a better world, but ended up with trainer envy, advertising billboards on our kids chests and kids scared of the outside.
Do you think they mark a better time?
Overall, I don't think the times were better (kids, after all were tortured in schools physically and mentally, and many stressed homes were no better... Some of that has changed... At least, there are legislative protections to childhood now) ... But I feel the media has changed from one that delivered a service for kids, and now uses them as marketing subjects... And unlike the tv ratings prompting spin off toys, the incredible power of the social media algorithms are selling sometimes harmful activities and  objects to children whose innocence is stripped away in different, harmful ways than ours was.
OoooOoooO
[By the way, in trying to find references to the play Peter Duncan was in during the 1980s I've mentioned here, I came across this quote from him.

"I grew up with it (the Troubles)," he says. "I followed it and was always trying to understand what was going on as a young man. It wasn't called the Troubles for nothing, it did trouble people. I suppose I had sympathy for those who seemed more oppressed than the other. I didn't always like what the British state did. I was understanding of Protestants and Catholics and why they did what they did.

Each time I'd come back and see the change, how different it was," he adds. "Protestants and Catholics have been to the forefront of bringing kids up sharing (their future) and not living in a bubble. That is powerful motivation for not going back in the wrong direction and creating a divide between people."]