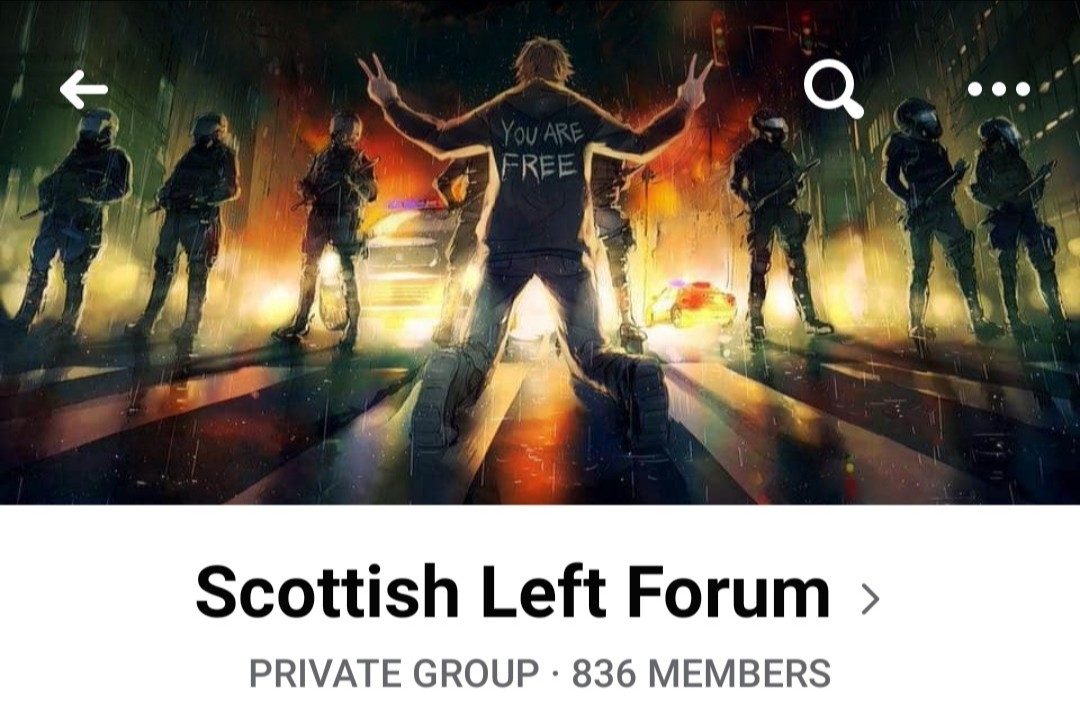 I'm writing this truly wanting answers. Scottish Left Forum was set up by me, to give the left a platform in which we could discuss outwith the constrains of party leaderships. It was as a result of what I saw as a looming collapse of the left I was part of, ie a Left that created a grown up space where we could put in to action activism leading to campaigns leading to real policy that changed lives, by, at the time, driving the ruling Labour Party in Scotland, leftwards in the Scottish Parliament.
That Left, post 2015, has indeed collapsed into factions ranging from small to tiny, and the non factional left are either on the SNP, Greens, the ever decreasing Scottish Labour party, or are without political home. The vast majority of the left in Scotland are not part of the small cultish hangovers of the 20th century Trotskyist, Maoist or Stalinist groups.
I am not an admin. I stood down as it was one thing too many for me during the period after my father died on Jan 31st.
The slf timeline at present, really does not reflect its original remit. And a number of people have expressed that they don't feel safe or welcome there. The two post limit, introduced after an influx of multi posting CPB'rs, has not factored in the prolific posting of a few cpb, swp and cwi enthusiasts. I've tried in the limited way I can at present, to try to counter the cpb, cwi, swp etc awful posts. A cursory glance at posts over th past two days shows posts praising Assadism; out and out Chinese government propaganda and an swp advert for one of their many public meetings. The posting of people who have been promoting totalitarian regimes is worrying. This really does not represent the left. At all.
I say this as someone guilty of giving these people a platform. The biggest mistake the SSP made was giving these groups the fertile ground in which to prosper again, and the results of their opportunism continues to marr Scottish politics.
I feel slf is in its present form, unfit for purpose, and rather than being a place where the left is safe to chat about campaigns etc, it has become a place for those who are defending abuses of power that extend all the way in to the Tory Party via support for Putin, and to fascism by way of, for example, the Chinese government treatment of the Uighur people and Hong Kong protestors (fascism also, of course, has links to Putinism).
I cannot in all conscience walk away from slf during this absolutely crucial period  when totalitarianism and fascism are/is on the ascendant. This might seem  catastrophising, but I feel allowing groups happy to clap fascists and right wing Brexit and who are daily posting articles that approve the Chinese Government's dreadful human rights record , and treatment of anti authoritarian protestors in Hong Kong, and Putin's homophobic and fascistic governance and alliance with the murderer Assad, to post with impunity, is not what anti fascists in the present hegemony should be doing.
I propose either, inviting new, non-factional admins /moderators to help the present admins; new rules on posting that will somehow address the bias towards the tiny pro totalitarian sects; or closure of slf (slf pretty much acts as a mailing list for these groups now- which was not it's purpose).
At the very least we need to talk about SLF.
Posted by Neil at 06:17 No comments:

Catcher in the Rye... Redux

I've always liked the book Catcher in the Rye. The first time I read it, I just thought of Holden Caulfield as a whinger, who had just fucked up and was delaying getting a bollocking from his da'. Readings later in life revealed much more... At different times, I've thought he was narcissistic, selfish, nasty, or depressed etc. My first reading as a young person, totally missed the catcher bit. And although I loved the descriptions of night time, jazz dripping 50's New York, I didn't get the significance of it. I preferred John Updike.
Back circa 1997, I worked for Shelter as a deputy manager. We'd have books donated, and in the shops I helped manage I loved to rifle through them, to help stock the shelves with decent quality stuff that would shift.
Books that were tatty or falling apart would be chucked. Sent to recycling (we got money for paper and cloth (rejected clothes etc). But now, and again I'd "rescue" one or two of the tatty, dead books and take them home if I thought they'd be interesting. I rescued a 1967 copy of Catcher in the Rye and sellotaped it together and reread it in 1999 and thought Holden was right about much in the world. His hate of the phoney and his acceptance that he should perhaps become phoney to protect his sisters innocence... and giving in in the end to all he had rebelled against, hit me as true as I emerged from my rebellion in my mid-late twenties University madness, into fatherhood.
His ultimate catcher in the rye story of taking the hit for Pheobe. 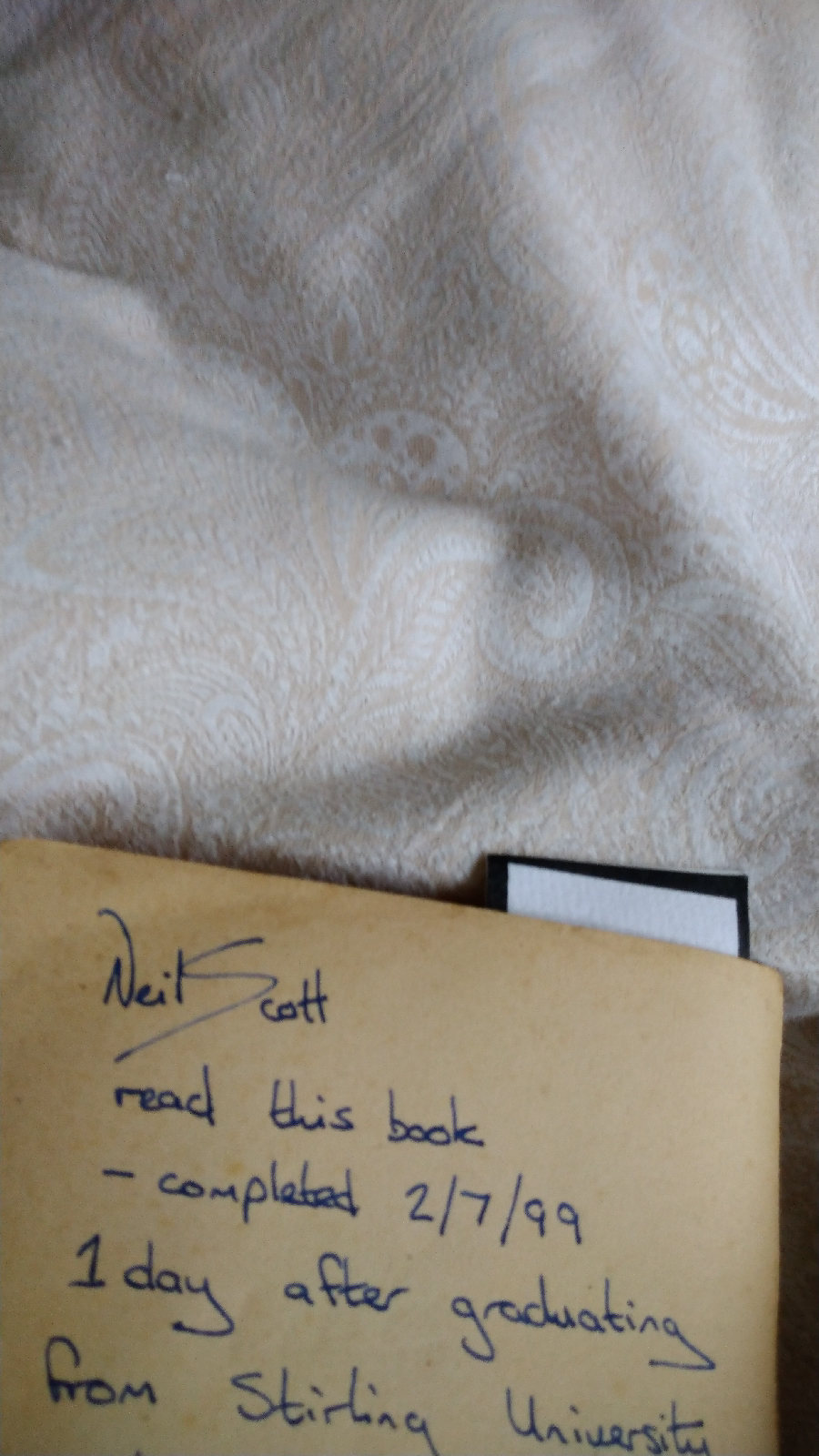 I found this time reading Catcher in the Rye was much more touching than ever before. Understanding better that strange twilight time in life we go through, being able to see the falseness, phoniness around us, and trying to find a path away away from it.
And seeing how, rather than my first few simpler readings of it, ie. thinking how much of a whiney  arse Holden is... - on the contrary... - he is a tragic, kind, damaged, abused figure. Someone with an inner dialogue that is at once trying to figure out how to navigate a shitty few years in his life, and wanting to protect his sister, and catch Pheobe... and the other innocents.
I really enjoyed meeting Holden Caulfield again.
I'd really love to rescue this wee copy as it is in a dreadful state now. Anyone know anything about rebinding books? 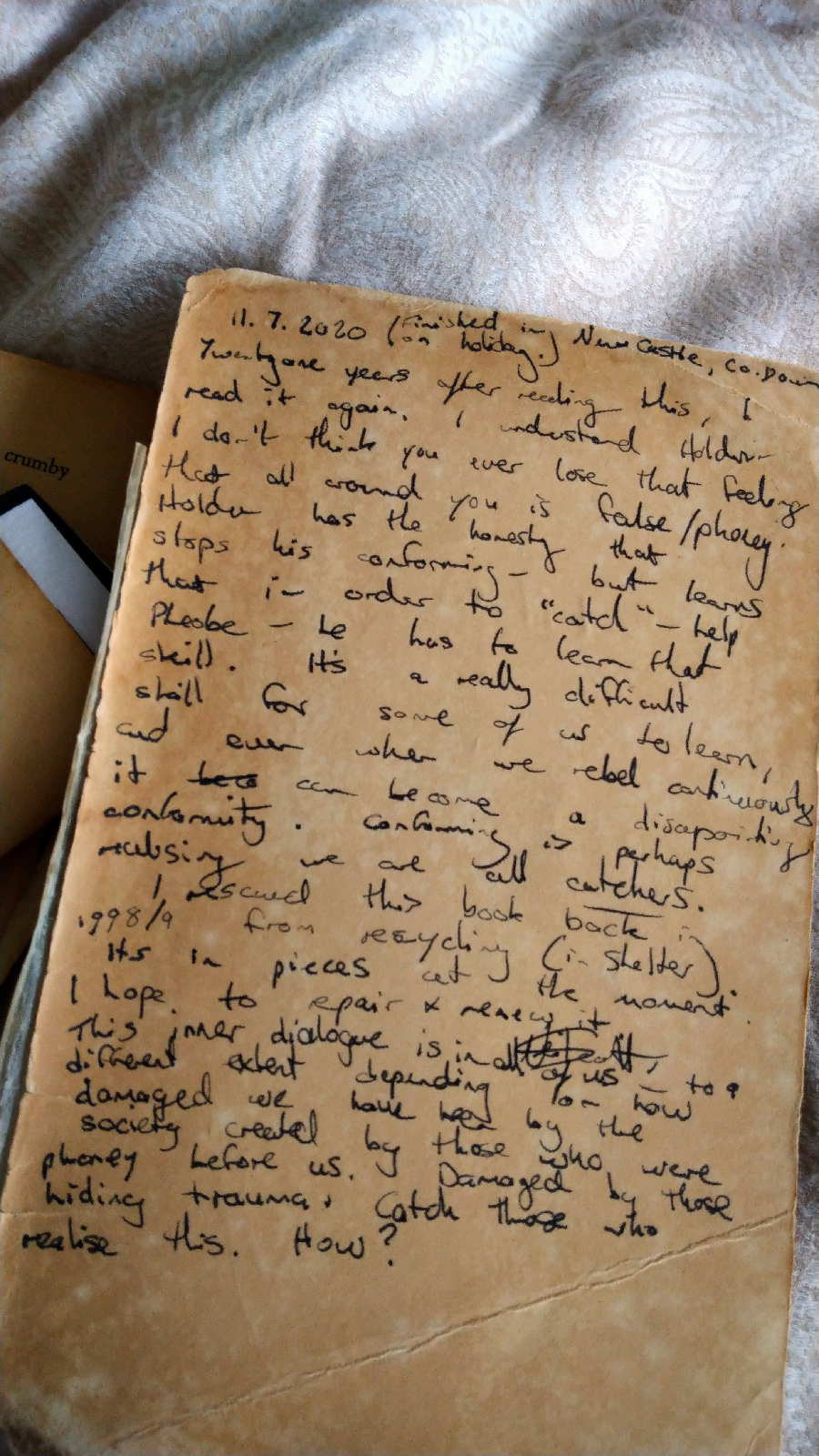 Death of the pub?

I gave up pubs eight years ago along with the drink. I used to love them. I've been in a few, sober, during that time. I feel uncomfortable in most of them. I feel uncomfortable amongst drunk people who feel it is their right to say and do what they wouldn't say or do without alcohol. I was not innocent in using that crutch, myself.
But I really do miss good pubs, and the great craic, I had in quite a few. 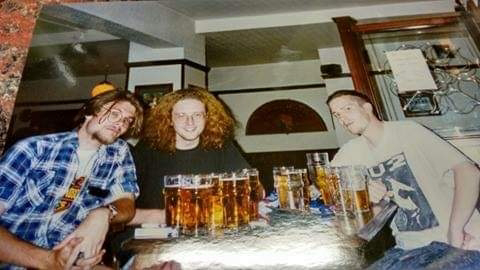 {In a pub nr Stirling circa 1994/5}
Pubs are rooms that have a small, dangerous, amount of people who are self medicating trauma and abuse, whether that be personal or societal. They can be awful places. Wetherspoons is the most recent phenomena that has taken advantage of people who are self medicating. I've been in a few of those both drinking and sober, and I've found them to be the opposite of the intimate, friendly places pubs used to be. There are a few, here in Glasgow and in Edinburgh, that retain the atmosphere of a welcoming place for  interesting chat. A few. 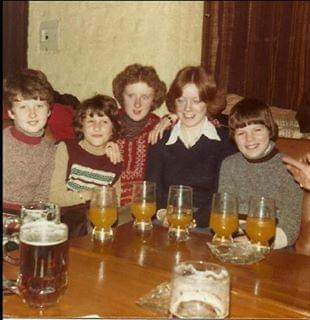 {Pubs were part of my life from an early age...}
One of my favourite writers about pubs, is Jeffrey Barnard. His love for his local, The Coach and Horses, was legendary, to the point were after a couple of failed moves out of London, he settled in a flat close to his favourite place. But then, his drinking pals were Tom Baker, Frances Bacon, Brendan Behan, John Le Mesurier amongst others (and amongst interesting, damaged in many ways, people who were far from famous). The craic, as we used to say after a good night's drinking and chat and tears and  laughter was, "90." 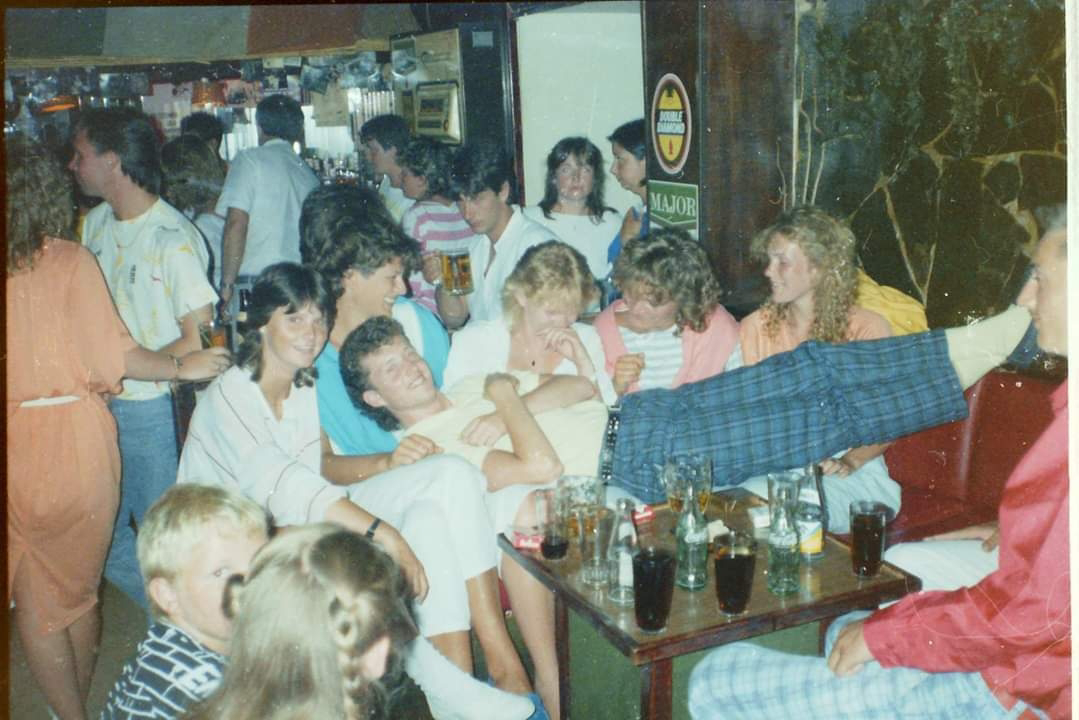 {Impressing the girls in a pub in Gran Canaria, circa 1987}
The pubs I liked, as a young person, really were the places of craic and the acceptance of a huge range of difference. People might think that is odd coming from someone who was brought up and lived in segregated Northern Ireland ... But there were many pubs like that there. The whole "golden mile" in Belfast was like that. Even some pubs in my mid ulster Town were like that. Pubs and clubs were melting pots of unionist, Loyalist, nationalist and republican (though they had their exclusionary premises too). And I pub crawled all over Ireland, throughout Europe (one such crawl was over a period of a month, through eleven countries, culminating on a beach in Corfu...), and throughout Scotland and parts of England. My adventures in pubs rarely met with violence anywhere I went (except one time in the mid - late eighties when a "friend" initiated a street riot in San Antonio, Ibiza and I was punched to the ground by an English "squaddie," busting my nose...), and a few times when I've defended girlfriends, girl friends and once poured my pint over a friend because he kept sipping from it. I have had the resulting souvenir broken tooth, unfixed, ever since. But I have never left the house for the pub or club relishing the thought of a fight. Ever. 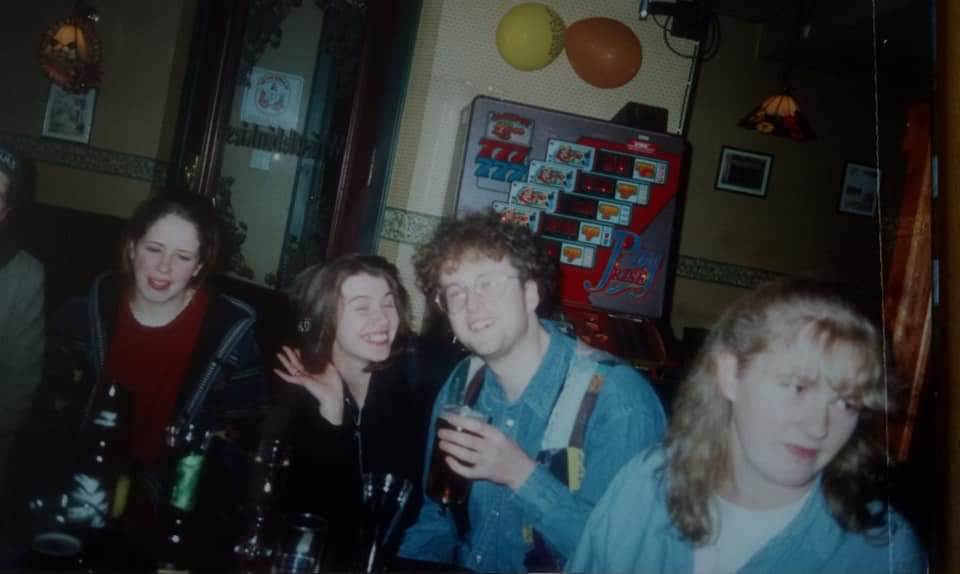 {Whistle Binkies, circa 1993/4}
Some English pubs are about an odd national identity. Drinking culture in most of England really was and probably still is, quite different from Irish drinking culture. A lot of it  is exclusionary. In the eighties, I visited London a lot... I found brilliant, and inclusive pubs there (including a visit to The Coach and Horses, in order to experience the "grumpiest Landlord in London"). And in Wiltshire, when I lived there, I found great ones there (I remember a brilliant one, The Bell, in Westbury, where the landlords had superb tales of a year long search across North America for a then reclusive Leonard Cohen). Outside those places, I find English pubs bedecked in Union flags, like some of those here in Scotland that reside near to orange lodges. Exclusionary, suspicious places. Places of machismo and threat. 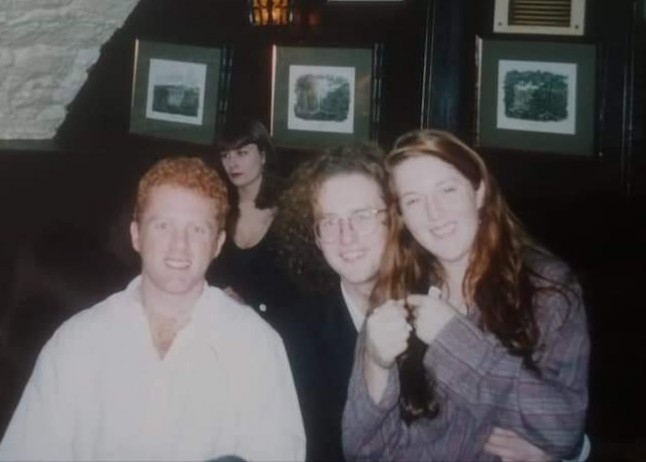 {Pubs that built character...}
I think the only pubs you can feel safe in nowadays are those who have extortionate prices. Class exclusionary. So, I feel that this speaks to the abuse the working classes have undergone in the past thirty - forty years, and to the death of the old, fun, comfortable pub.
This weekend, England, Tim Martin (owner of the pub chain Wetherspoons, a chain a friend describes as "Macdonalds for alcoholics"), Boris Johnston etc, did more to kill off the pub than the coronavirus did. 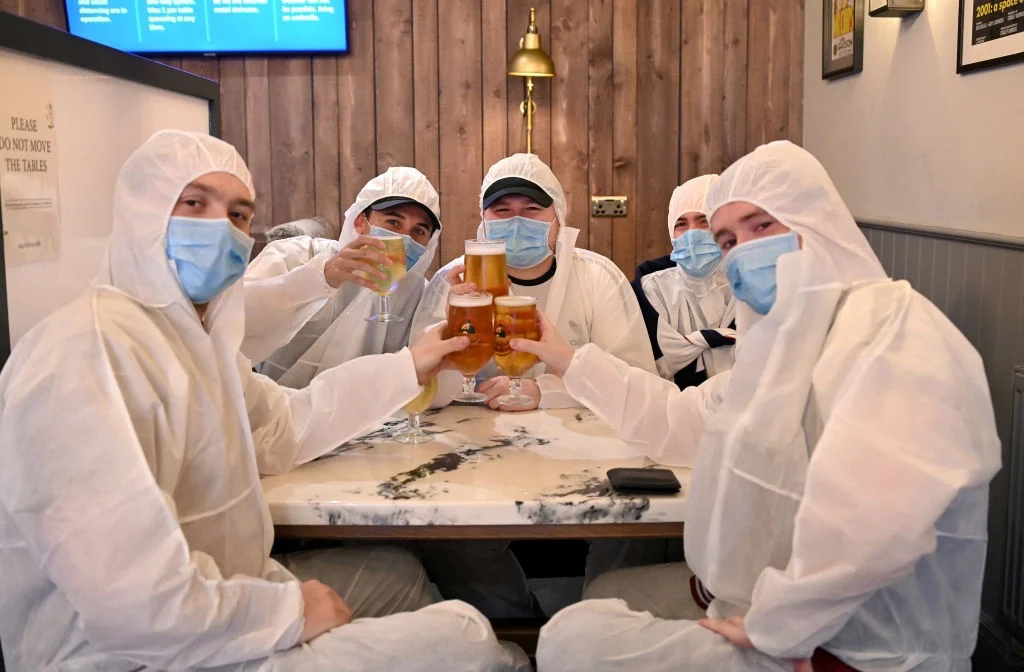