Just don't do it.

Actually, I tried it out of school. I remember the thrill of going to the wee shop near Granville Gardens, Thompson's, with Micky Neeson and Mark Anderson and his brother David Anderson, who'd have been about six... We deemed him too young to smoke with the 11 year olds, and buying "singles." It was a big thing.

It became a defence mechanism (which, I suppose, it remained being). One of the people I feared in school (who once through me down a flight of concrete stairs) was one of the smokers. I used to "Stay in" with him, by having a feyg with him (not often) on the way home from school.

My school smoking was more effect than actual. I'm sure I didn't inhale. That came later. 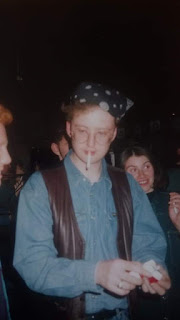 I had an on off relationship with cigarettes throughout my late teens and into my late twenties. When I exercised, when I cycled or ran, I didn't smoke. When I drank, I did sometimes, and sometimes a lot. It was a social thing. An affectation that was highly addictive.

Another one of those things to hide behind.

Incredible really. I remember even when I did it, I thought it was a strange act.

Now, I loathe the very smell of cigarettes, pipes, cigars or vapes.

It really is interesting, though, how society has went from a huge acceptance of these things, to pretty much a total rejection, when I look back at pubs with air blue with smoke (I thought stopping smoking would spoil the atmosphere of my favourite pubs... I was right... We could all see each other). Restaurants and other public spaces were absolutely littered with cigarette butts.

I don't judge anyone still "in to" these things, that are still addicted to these awful, stonking, carcinogenic things. Not at all. Because there were times that feygs were enjoyable... Drinking into the wee small hours in the Downshire, Tom Barney's or at some party or another. And at uni, the roll ups were part of the uniform.

But, I'm glad I don't smoke now. And I'm glad public health has won the argument with Big Tobacco here, at least. (This isn't true for other countries at all).

I remember when the Berlin Wall came down, about a year and a bit later, Ian Mooney and I were there, and Marlborough were giving free feygs out. They were also massively cheaper in East Berlin. The East Berlin and former Soviet block feygs were like smoking horse dung from a horse that ate only cow dung. A few years later, when in Stuttgart, this giving out of free feygs was still happening (I was there visiting a friend, Paula Harkness). We were given a pack each as we sat in a restaurant. Legitimised pushers, pulling in new addicts. This practise still happens across the world... And the cheap/free feygs are aimed at young people. 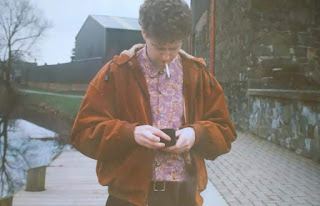 Like most things I've given up, I couldn't justify giving these corporations my money any longer. I've often wondered about people on the left who boycott certain corporations, but who continue to feed the profits of these massive organisations who target children and young people in the 2/3 world in order to create addicts for their foul, fatal product.

Anyway, anyone trying to give this drug up, you have my total admiration. Its a struggle, but you will get there, even if its a long journey with some set backs on the way.