This album  won't be to everyone's taste... And up until the time I bought it, I didn't think it would be mine. I was Mr Alternative at the time, after all.
But it comes with two related stories. 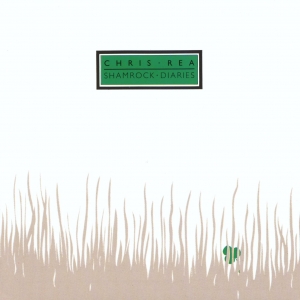 In late summer 1984, I met a girl. I met her by chance. And I fell for her in that flat out, all encompassing way you do when you are a teenager.
I remember we were in The Coach front bar. The Coach was, at the time, one of the biggest nightclubs in Europe and the front bar is where me and my mates met most weekends at the time.
The weekend routine would be, a few cans of beer outside somewhere, then meet up in Coach bar, and then maybe "up the back" to the night club, or on to other pubs, "The Belmont," which was a hotel and had another nightclub; The Downshire for a lock in or Circus Circus for late night bring your own clubbing (and "The Circus" had at that time, a live band area).
Anyway, I don't remember why we all stayed in the Front Bar that night, whether the club was too packed or the craic was too good, but I do remember where we sat, which wasn't where we normally did. And Nigel, a mate, had brought with him his stunningly beautiful neighbour, Allison. Its 36 years ago and I still remember the white dress she was wearing.
I remember even better, that she was funny, she was witty, clever and she seemed to find me funny, laughing uproariously at my sarcasm. I remember the bar was packed. And I remember she sat on my knee because there were no seats.
When she had to leave, we promised to meet up the following week, and boy, did I look forward to that.
At the time, I had started to work in an Accountants Office in Bow Street, Lisburn, as a trainee auditor. I hated the job, and spent my time at the start, staring out of the window. The week after being stood up I happened to look out of the window, and there coming out of a shoe shop opposite the office was Allison and who I thought must be her sister (it turned out it was her mum, which on retelling gave me huge brownie points!)
I rushed out of the office, and down the stairs, and searched Bow Street for her… But there was no sign. I had to tell the staff in the office why, and they (all women), thought it was "lovely."
That weekend, I was probably the first person in the bar. And I waited. My mates showed up.
And I waited.
And eventually, I remember Nigel walked in. My heart leapt. But no Allison. I had to be casual about it, and asked Nigel, "Allison not here, then?"
"No, she's went sailing in the Mediterranean. Her dad has a yacht there."
I remember this being really odd. I'd never met anyone with a yacht. The people I was brought up amongst didn't sail.
I was determined I was going to meet this girl again. So I remember phoning Nigel during the week  (phoning in those days, as a working class family, was a big thing… Not the casual thing nowadays.) I said to him he had to bring his neighbour to the Coach again.
The following week, he did. And she and I laughed, danced, slowdanced, and kissed and arranged to meet the next day in Lurgan, where she lived and I was introduced to her family, and we all got on brilliantly. And so started a wonderful summer. A teenaged, happy, romance. 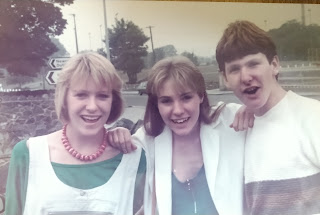 {Allison, centre. Her friend Rachel on her right, Nigel on her left}
We had real fun… Joyous times. I discovered Dublin, Cork and London with her. And food and wine and (laughably now), fashion.
Allison was of money. And I met her shortly before Stainsby Girls came out… a song Chris Rea wrote about his "posh" wife. And at first, the novelty of her being from a different class, was more than bearable, (especially when her mum and dad trusted me with their cars, a Mercedes and a soft top Black Golf GTI, which of course, I loved to drive).
But she went to public school in England, and then went to Finishing School in London, leaving for months on end, letters being our only connection. And all of these things, including my own feelings of inadequacy regarding money, position etc as I began to realise just how wide the social gap was, really played on my mind. Add to this, times, when I suffered empty, grey, bouts of indescribable depression. Indescribable, because I really had no idea what it was and why I was suffering it.
After around three years, I had to walk away, which at the time really crushed me. The clincher being one day a family member spoke about "them," and threatening to close the family factory because of union demands. "Them," as in the people who worked in the factory they owned. And it was the last straw for this, burgeoning mini Marxist. I was a "them." I worked in a factory. I was a union member. I loathed the Thatcherism that was destroying my community and work places. Our summer romance, that lasted three years, was over.
The summer after I met her, during our absolute obsession with each other, Nigel and I decided to do the summer cycle the Belfast--Dublin and back Maracycle organised by a peace organisation, "Cooperation North,"  a two day 202 mile round trip.
The Maracycle had started the year before, and I had watched as the 2000 participants had cycled down the newish bypass that ran behind our house. I knew I had to try this. I was a runner at the time, running half marathons and ten milers etc. I was, after an awful time at High School in many ways, trying to prove myself and trying to break out of the chains I felt pulling on, pushing on, and filling my mind with what I can describe as grey, hopelessness.
I wanted to prove to the world I wasn't the person I had had hammered into me I was, by psychopath pupils and a teaching staff that were fighting fires all of the time. The education in Northern Ireland meant all of the social problems went in to Banbridge Intermediate /Secondary /High School (the three names it had when I was there) and the middle class, confident children went to the Grammar school. We were sifted by the awful verbal reasoning tests; the 11plus. I hadn't passed, and it meant four years of learning how to dodge having the fuck kicked out of me. I was shit at PE, because PE consisted mostly of football, which I was taught to hate.
But when I left school, I took up running, and got on my bike.
Nigel and, I began to practise for the cycle, and one Saturday night, we decided that the next day we'd do a big cycle, around the County Down Coast.
The next morning, I sat and waited and waited, and eventually, two hours late, Nigel pulled up in his car. He was sorry he was late, but he'd went to the all night party I had turned down because I wanted to cycle.
Nigel was hung over… And wanted to "just do a short run," which annoyed me as I had planned to cycle at least 70 miles. So, I suggested we cycled to Newry and back, which is about 15 miles, away. Nigel agreed.
It was a beautiful morning, and the run to Newry, mostly down hill or flat, was wonderful. We stopped at a junction in the town, and I convinced Nigel to cycle on to Carlingford in the Irish Republic as it was "just around the corner." The road to Carlingford, along the, Newry Canal, and then along the sea shore of Carlingford Lough, is a little hillier and the sun was blazing down on us. At every corner I had to urge the hung over Nigel on, saying, "just a few more corners, and we are there." He pushed on, slowly, and eventually I said, "we are nearly there. I'll meet you at the castle..," and cycled on.
About two minutes later, I heard a clatter. I turned and cycled back around the corner to find Nigel lying at the side of the road, collapsed in exhaustion (or dehydrated due to hangover!)
I persuaded him back on to his saddle, and a few minutes later, we were freewheeling down into the beautiful medieval village. We cycled on to the old pier and sat, legs dangling over the edge, glugging our water, and munching our Mars bars (which were what amounted to energy bars in the mid eighties!) and stretched out in the sun, and listened to the new Chris Rea album, with the title he came up with as a tribute to Ireland, as it languidly, calmingly soundtracked that memory forever from a car parked nearby; my head full of romance, and my want to prove I was a not what had been hammered in to me in parquet floored classrooms and "play" grounds.
Nb, I pushed Nigel on, and home the long way, round the coast and then the hilly back road home from Newry… He thanked me later... 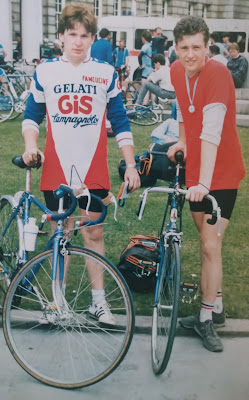 {Nigel and I on completion of Maracycle 1985}
Play the, album on YouTube HERE
Posted by Neil at 06:37