Weird.  This link came up in my FB today. With the annual “which Christmas song is the most dodgy” fest now drawing to a close (Baby its cold outside, and Fairy Tale of New York taking the heat), I was thinking of Gary Glitter.

Back in 1984 I was 18. That year was a seminal year in my life – I had started to drink with my mates the year before, had my heart broken for the first time, then quickly met a new girl I went out with on and off for the next three or so years and had just been sacked from my first real job that September (a story for another time). I was also working part time in a bar at nights and in the menswear dept of a Department store during the Christmas rush.  It was the year of Frankie Goes to Hollywood, U2, and others...And of course, the Christmas song of 1984 was "Do they Know It's Christmas Time," a song we bought more than once to feel good about feeding the world (and rightly so after the pictures we saw on our telly's of starvation and death).

I loved music. My music taste was very different from my friends. I loved Joy Division and New Order and lots of other what was called “alternative music.” I was in to Roxy Music, The Doors, The Velvet Underground, Japan and one of my favourite all time songs came out that year, Echo and the Bunnymen's "Killing Moon" - the 12” vinyl version I played to death… so Gary Glitter’s new Christmas song, “Rock and Roll Christmas” was nothing but a novelty thing to me - but it was part of a really memorable part of my life, and even though I don't seek it, when I hear it, it brings back brilliant memories of a fantastic Christmas with a superb bunch of friends. When I hear it, the first thing that comes in to my head isn’t, “This guy is a fucker,” but my mind drifts back to The Coach (a local night club), Gowdy’s (local pub), The Downshire (lock-in – and a place I worked part time) and Alan Gallagher, Alex, Colin, Allison, Paula, Andrina, Kilkeel, Houstons," and events that I suppose are memories and feelings most people who were 18 that year in some way can relate to. It’s not something I really sat down to listen to – it never would have made my record player or tapes I made of the Sunday Radio 1 chart show. But, nevertheless, for years afterwards, it was something I heard a lot – and I suppose, partied to in discos and Christmas do’s.

And now like all of Gary Glitter’s songs, it has disappeared. I don’t mourn it’s passing. But I do wonder at the reason for this.

Robert Martin, a boy I went to primary school with, absolutely loved the cartoonish Glitter when we were at school. I remember him being asked up on stage when we were in perhaps P3 or 4 to sing one of Glitters songs – he did with all of the accompanying Glitter dancing. Bang goes a huge part of HIS childhood! Glitter’s songs and I suppose, legendary status in the pantheon of Glam rock – the pre punk cartoonish, tinfoil wrapped pop aimed at young teenagers (when I was a pre teen) – was assured, and he made a bit of a come back with "Christmas Rock and Roll" - and again in the late eighties and early nineties when he was used in advertising by British Rail.

His songs were everywhere… and in those “flash back to the seventies” TV things, he was up there with The Sweet, Marc Bolan, Sparks and others.

He kind of passed me by – although I could understand the attraction to his songs, I preferred First Class’s “Beach Baby,” and me and my friends were into Mud (Lonely This Christmas is still a must play at this time of year), Sparks and playing in mud, making road blocks from rows of stones (I lived in Northern Ireland), and breaking windows with sling shots. Seriously though, I always found Glitter odd, like I did Saville, There was something not quite right about them. They looked old, but were always with children, and their hair was just odd. But I would have sold my family to be on Jim ‘ll Fix It at the time… 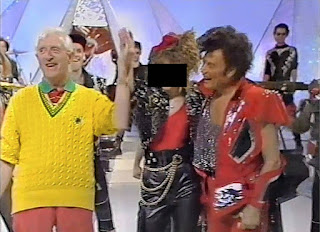 Isn’t it really strange when we watch pop tv histories, these people are now completely cut out? I know pop culture history is as disposable as pop culture, but it is surely a huge part of who we are/were? When I watch TOTP reruns on Channel something obscure, there must be bands we no longer see giving the miming performance of a lifetime because… well, Saville introduced them, or Glitter was on the same show as them. I feel cheated somehow, as if there is a huge black hole where memories once were.

I know Glitter’s heinous crimes. And I certainly don't think he should earn from his massive back catalogue – and I really don't care if he rots in jail - but the other song writers and musicians who worked with him – should they suffer? Many artists of the past, from film makers through to composers, painters and writers have done dodgy and dangerous things, yet society still holds their works up as pieces of necessary art (Polanski (sex with under aged girls), Allen (ditto), Wagner (racist), William Golding (sex with under aged girls), William Burroughs (shot his wife in the head), Patricia Highsmith (ultra racist and someone who thought the holocaust didn't go far enough), Orson Scott Card (homophobe and racist), Ezra Pound (anti-semite), TS Eliot (Anti semite)…)

- is there a culture snobbery involved?

Perhaps the Mail or the now equally airbrushed News of the World couldn't really make much hay from those high faluting people (though I have often wondered why Scott Card is still sought after by sci-fi fans, as a sci fi fan myself...)

As a teacher and a father, the worst crime in the world are crimes against children – against innocents. Glitter - Paul Gadd- committed unforgiveable crimes – some of which he has not been tried for in this country.

Should pop history be erased in this way, or should Gadd’s songs still be played? Should pop history telly include Saville and the other abusers that were revealed in the past ten years (and of course, reference their crimes)? Or should all art by abusers and criminals be erased down a memory hole mitigated by the BBC, ITV and our press? 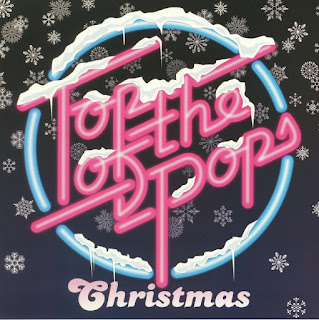