Being Wrong 2 - The Irrational in Politics… Who Makes the Tea?

Things were so much more simple back when I wanted them to be. Solutions were easier. Socialism was the answer and what THAT was was plain to see – to me. Until I met the left organisations that call each other “comrade,” but hate each other’s guts. 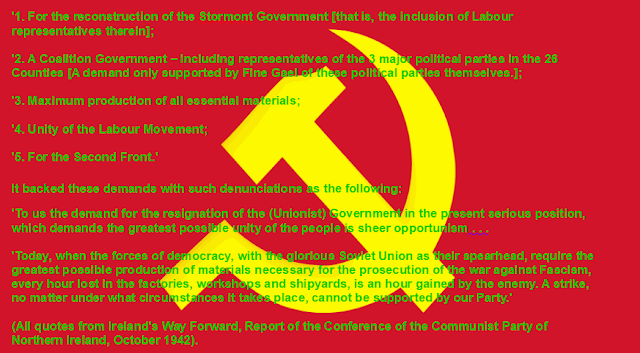 This piece will mention various wee groups (because they are wee – but some have inordinate power because of how they insert themselves in unions, campaigning and professional bodies). I apologise to you for that. If you want to continue reading this and don’t want to be confused by their names, think Monty Python. Think “SPLITTER!” And think “Enemy of the Party...” If you don’t know what they are, they will have a label for you. You are either a neo-lib, a Blairite, a Tory or a traitor or worse. Or a potential member with money and newspaper selling capacity. When you begin selling those newspapers, expect praise, and condemnation in equal measure. And whatever you do, don’t ever believe giving the papers away is a good way to get your message out. Taking that pound from that wee woman on her way to get her fivers worth of groceries is part of the bigger picture that will save that wee woman from the hell of not being able to afford Friday’s tea.

Politics at present are odd, and I'm not sure of where we go. Trump draining a swamp, to replace it with a huge hole filled with shit; Brexit; a Scottish government with no credible opposition, plus a UK party in power that is dead but floating like a sparkling turd in the mire and actual seig-heiling Nazis on our streets, smashing up bookshops AND with power...

Don't read this for answers. It's about questions. And if you are happy in your cadre, this isn't for you either. To be honest, if you are happy with your corner in the current polity, stop here. And if David Icke, Stephen Yaxley-Lennon etc hold some truths for you, please go join one of the groups I mention below and have your head at least sorted to move to my level of cynicism. It took me 13 years in one. You never know, if you join, you might find some level of comfort. You might find answers in local campaignsg (as I did) and you might find a parent who will make the tea while you sell papers.

For years I wouldn't join a political party (I dipped in to a couple and promptly got my coat). I never joined a left faction either. I joined the Scottish Socialist Party (SSP) in 2002 because it seemed to be bringing factions and left individuals together. That was smashed of course, by the Sheridan show, the Socialist Workers Party (SWP) and the "Bambury – ites" (those who worked with Chris Bambury within the Socialist Workers Party and then split from that party to form a small Scottish Trotskyist faction), 2005-07. I stayed with that party and probably should have left in 2011, but a combination of a great active local branch and the promise of the up coming independence referendum kept me there and by 2015, had me crushed between machinations of two groups of splinters from the old Militant Tendency and the SWP. I left, sanity almost intact. Almost.


Labour in Scotland and the dreadful way the UK Labour Party have dealt with the anti-semitism row has ensured I stay clear of that mire. And personality politics, and the meeting of right and left in one party has kept me away from SNP and Greens (though both have got a lot of positive things going for them, and Im sure given their current message/ makeup etc, I’ll vote for them at the next election).

The left as defined by the original SSP of the early 2000’s I joined no longer exists, and can't exist under the conditions created by vociferous mini-groups on the left with inordinate power in the press and within movements (and fronts) here, and the strength of the SNP. It cant exist now as one of the original factions that shared power controls it completely. The passion of some individuals within it is there, still, but they are voices that whisper distrust even when they herald comradeship. And all of them either accept the current long term parentage, or are enthusiastic for it.

At present, I don't feel the parameters of the existent, proactive left in the Scottish “Yes” movement work for me, or for that matter a positive vision of a better Scotland. I also feel the activities policed by a wider Yes movement dependant on money from rich SNP members, and organisations "ok'd" by the new unknown Central Committee (ie who decide who can officially take part in the next independence referendum), and a movement almost incapable of self criticism levelled at the pursuit of being better than what we are supposedly fighting against, ensure strife amongst those of us really not interested in replicating a Scottish version of late 20th century UK.

You may not be familiar with a lot of what I say regarding Yes, or left movements. Some of you will be. If you have any questions, ask them below. Or on twitter. Or Facebook. Dont expect definitive answers on everything. But I’ll definitely get back to you. Though I’m not your mum, dad, leader, or person with all the answers. Subjectivity is understood by the right wing. The left tries to erase it from all they do, so objectively, conditions are better or worse for all when measured using their particular metre sticks. My 30 cm ruler is mine, and has measured a lot of rooms of people sagely nodding that one faction or another’s meter stick is a metre and not just clever guesses at distance.

This whinge isn't, of course, just about the left Yes movement. It is about much more. It is, I suppose about how people interact with each other. And how some seize narratives and sew truths that pull people down rabbit holes that are new or established. It’s about how “the bigger picture” becomes “means to an end,” and “casualties of war,” and “collateral damage.”

I think there are good people with good intentions across left groups in Scotland, and the UK, but I feel the present our "Yes" movement and the left in general, is going to be walled in by self-righteous, mostly well meaning, middle aged men. The butterflies have all been painted grey and pinned to a baize covered ply board. This also goes for the left in England, Wales and Ireland. Subtleties are lost. People are lost. People become collateral damage. Enemies of the party; their faces ground into the mud are a means to an end. An unavoidable stepping stone to a better Scotland and a better world.

I'll still vote Yes in an independence referendum here, but I don't know what that, as a progressive, means now. Yes, no more shitty Westminster Tories, but it can't JUST mean what the Bambury - ites say in their columns in The National, The Herald, etc; it doesn't JUST mean what the SNP say, Labour say, the SSP say, or the SWP, CWI or Solidarity/Sheridan/Hope Over Fear. And it doesn't mean what my analysis is either.