The sky is low and grey and wet today. I walk as fast as my middle aged legs will take me towards the warmth of the overcrowded train, meeting no-one’s eye from the moment I leave my warm, tidy flat.

Last night I watched TV as I do every night. It doesn't entertain me. I don't seek entertainment. I don't seek peace. I seek enough distraction there in that quiet, musical-less space, until that feeling I will shut down for the night, and begin the day again as soon as my body has had enough of Morpheus’ gift.

Sleep is a gift, something to take me away from the gift I share with the Nazi’s children on the documentary I watched. One accepted his father crimes – his father and mother both being cruel to him; distant; afraid of love. And both stealing and killing from the interned; those they had marked with a star and damned. The other, brought up in a loving Nazi’s home, unable to square the kind father with the man who had commanded executions and torture.

My own guilt is not so easy to either stand firm and say, “I did that. I am a horrible mass murderer;” nor is it easy to say, “I am generally a nice person – I fight the system I’m caught in...” 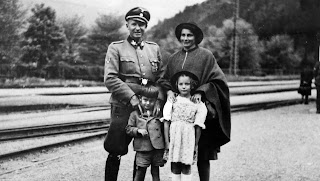 Because here I go again, pushing against the wind and rain, avoiding the rush hour tyres throwing puddles towards me; trying to focus only on the next part of my distracting routine; buy a newspaper and a black, ultra strong coffee from the vendor on the platform. The same smiling face, surprising me every day by asking me asking me if its my usual I'll be having – someone so young, hopeful and stuck in a routine and I know, satisfyingly, she won’t think of me until my soulless eyes gaze upwards towards her again tomorrow.

I’m earlier than usual. This is not good. This means a wait for the train that can only be filled by reading something from the paper at the side of the track, opening a newspaper and holding my coffee. 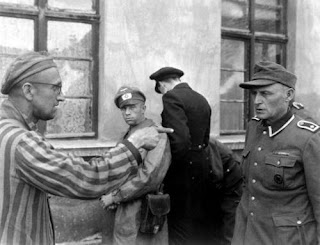 I slow my pace. Maybe if I walk slower and concentrate on surroundings; watch other wet drones head towards their places of work to earn their heat and distracting TV and packaged, microwaved, reconstituted food; perhaps that will distract me.

My glasses are covered in droplets, my peaked cap losing the battle with Scottish rain that defies gravity and falls in impossible angles. I want to be under the cover of the shelter at the train; I want the brief human contact to be over. I want my coffee and a paper to distract.

And the guilt washes over me. The deaths I have caused, the suffering, the total breakdown of humanity I have created and continue to create for my heat and soup.

I think of the children battling for their lives, the mothers who will cry blood over the bodies of their sons because of me. Because of what I do, every day, to buy stuff some other poor person has been forced to create in order to afford heat and cheap food.

Nuremberg was the height of humanity and logic after a war and after the liberation of the death camps – fair trials of those who were responsible for decisions that meant the extermination of millions of people. The world was able to work towards a cleansing because the Nazi’s - the murderers – were carefully tried; given time to realis their part in the machine of death they had created, alone in their cells or in the dock; and the guilty were sentenced - their sins purged, leaving only time to heal what they’d done. 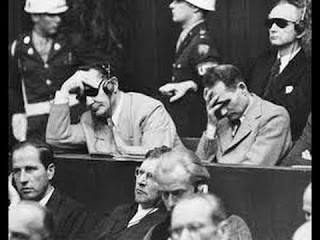 Every day I make this journey, knowing that somewhere in Syria, Yemen, Iraq, and other theatres of war, death, annihilation people will die because of my alarm wakening me this morning. Because I have this routine, because I fill the silences with distraction and wont forgo my heat, food and peaked cap.

I arrive at the station, and cross the bridge to the centre platform. And I look up at the girl, and she says, “same as usual?” And I nod. She fills the coffee filter, twists it around, pulls the lever and sets the paper cup underneath the trickling brown liquid and turns and lifts The Guardian from her rack and hands it over to me. The same distracting, satisfying routine as I stand here, water dripping from my cap. I take off my glasses and wipe them with a serviette and she smiles.

She smiles at the mass murderer, the man who today will take the decision to carry on in the system and create death; blast communities into the stone age; tear children apart; vaporise mothers, brothers, sisters, old and young. 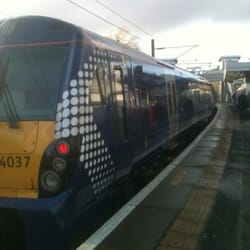 Her face changes and I realise I am crying. The routine has been broken and the wall has been breached, for a small time. My regret spills out for a moment, acknowledged by this girl.

I look at her, and I go cold. I’ve slipped. She does know me. She looks at me as if her world has crumbled, embarrassed. This exchange has gone beyond the usual mumbled “Good morning,” and “Thanks.”

I stare, horrified, but out of control and I sob.

She looks from right to left. There is no queue. And everyone is facing the direction of the approaching train.

And she says, “What has happened?” Her action of capping the coffee cup with its lid, wrapping it in a serviette and moving it through the space between us is retarded, she is moving through a starch thickened atmosphere, created by my spasmodic sobs.

The train pulls in and eventually I reach for the coffee, delve into my pocket and thrust the fiver at her. I usually wait for change but I turn and make for the train.

The day goes as it usually does; I read the paper on the train - death, destruction, bad decisions of political people, singers screwing and footballers failing or not. I kill thousands through my work. I go home, picking up pizza on the walk to my house, and live the brightness of the One Show, find a documentary about Stone Henge, watch a chewing gum Netflix series I never remember the name of, get sleepy and barely make it to bed before I fall asleep. 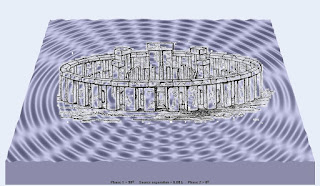 My uniform is dry, and the morning outside is cold, icy, misty. My glasses steam up and I wipe them on my cuff.

The acrid taste of the exhaust of the rush hour traffic fills my asthmatic lungs. But I think, “at least it isn't phosphorous or the sharp metal rain of fragmentation or shrapnel. I know the difference between these words, as I should in the killing business.

I made sure this morning that I filled my cereal bowl a little more and had two glasses of orange juice – just to ensure my timings are right. I wont have to slow my usual pace.

How will she react? I need the coffee and I need the paper, otherwise, my head will be filled even further with the screaming, dying children than it usually is.

I can’t avoid her, I cant avoid the routine. But I’ll just keep it to my usual interaction; walk towards the kiosk, smile a “Good morning,” and she’ll give me my usual and I’ll board the train, keep my head down, buried in distraction and the day will eventually pass.

As I walk, I try to think about the man explaining the acoustics of Stone Henge, the ancient sounds that those people once must have thought were the amplified voices of the sky Gods. But my mind quickly flicks to the dirty faces of the refugees walking through the muddy fields, unwanted after the ordeal I have put them through. Hated by people across Europe for daring to leave the burning metal and forces that rip them apart. 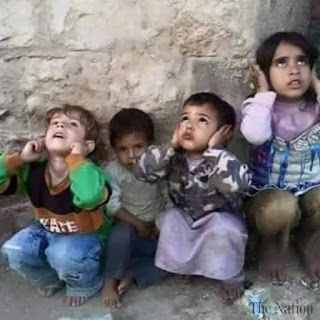 And here I am walking to the place I make the decision every day to go to. A place where decisions are made to help create the perfect white hot metal storm to rip through their houses, churches, mosques, shops, schools, weddings…

I arrive at the station. I feel relief as it distracts; this problem I created yesterday, and my solution of ensuring there is less time to think at the kiosk. Less time to dwell.

I approach the kiosk. She looks down at me, I smile and say, “Good morning.”

And she doesn’t say the usual, automatic words. The meaningless exchange, the exchange we have every day that can be forgotten as soon as it has played out has been broken, as if someone has drawn a chisel across a record.

“How are you today?” She says, looking concerned.

I don't now what to say. I open my mouth, and I want to say, “A large black Americano with an extra shot and a Guardian, please,” but I cant.

Yesterday comes flooding back. My grief at that moment. The slip. The chink between the veil of pretence that all is normal opens. And I freeze. With my mouth open.

“Is everything OK?” She says.

I look from right to left. No one is looking. Everyone is ignoring the world around them; engaging in important distracting trolling on their phones; reading papers; watching the tracks; watching the time table.

She is looking at me kindly. 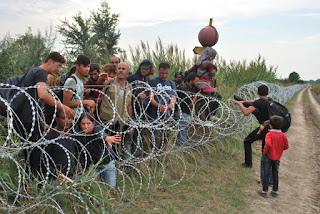 Her brow furrows. “Are you OK?” She says again.

I say, “No. Im not. I take part in the butchering of families and communities. I buy my coffee and my Guardian from you and heat my house and buy my crap food with the proceeds of my murders.”

And I sob and walk away.
And the train arrives and I get on the train, crying. I have no distracting Guardian; no coffee to give me a distracting focus. I think of the lives I will end or destroy today.

I get off at my station and walk the short journey to my work and I clock in, and go to my machine and load it with wire, start it up and press the button that makes the ball bearings fall into the tray I inspect and pass on to the next guy…

There will never be a Nuremberg for me.