(A piece I've submitted to the "Ungagged!" website which will be launched next week).
Lots of people are in to "Mindfullness." I don't see it as a particularly bad thing at all. Yoga helped rid me of my aches and pains after all. Thinking about what I eat has changed my shape and given me energy- and my frazzled tastebuds back, so self help, in my opinion CAN help change society. Some little changes to your lifestyle can impact on how you see the world and interact with people. Eating reasonably healthily, not smoking and quitting drink has made me feel happier, more energetic and able to meet the world. Surprisingly, when I ate shite I felt shite. Which is a pity- because shite tasted good. A quick fix. A burger or a spicy chicken something or some other piece of dead, chemical pumped, pig fat filled flesh in a bit of fat injected pastry.

At present, British society is being dragged to the proto-fascist right. I read words of hate and hear reasonable, lovely people say the most unreasonable things about "Muslims" and "foreigners." A wee bit of self help can help with this swing towards a KKK style, burning cross on the lawns of the semi-detached lower middle class majority. And the thing is, I recognise the words they spit when they speak about the outsiders they have met only in one place... Well, not met exactly- but read about or listen to fat rich fuckers on tv and radio cleverly demonise using references that on cross examination they can deny are racist- but are cues that can be picked up by people like us- cues that direct us to the great white telephone of racist boaking Huey. 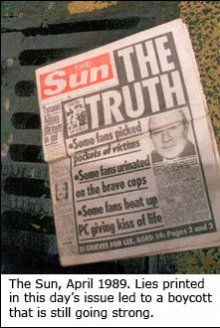 I have a self help guide. How to rid yourself of the stodge that bloats your mind with hatred and fear and deflecting blame. It isn't your fault that you have been targeted by these billionaires as their bastion against anyone taking their power from them. Your fat postuled mind, poisoned by their video, needs a work out.


Back in 1983, Debbie Harry starred in a film I probably wouldn't have watched only for the fact Debbie Harry was in it. 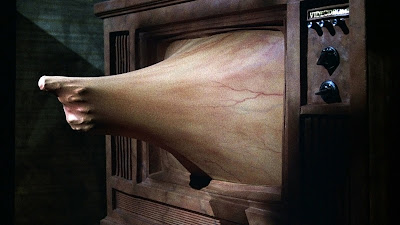 At the time, across the world, the press were worrying and deflecting us with stories of depraved snuff videos, chess matches and horror, the USSR arms build up, Samantha Fox and Sylvester Stallone, while the billionaires and the Tories raped the country of its industry and stockpiled enough profit bleeding weapons to pulverise the world into a puff of smoke. The press deflected us from the robbery of our working class heritage- snatched by Thatcher, her pals and Reagan- while we blamed the Ruskies, the Argies, and Holywood for the terrible youths standing on street corners, dancing to Too Rye Aye and dangerous boys in eyeliner. 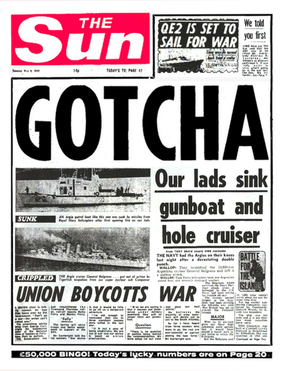 Videodrome, Cronenberg's biggest hit at that time, predicted a world of reality t.v. gone mad and corporatise control of our heads.


Of course, people cite research they haven't read, but have been "told about," to argue against their having been manipulated or that young people don't become violent or sexist or racist or hydrogenated fat filled because of messages on their many screens. The same people can also cite research they have never read (but believe they have as it was in the Sun or on daytime TV or radio) that says global warming is not real, or that the fucking illuminati control everyone's ass except their fat one. And that smoking, regardless of it being a criminal industry that targets children in developing countries and is re- glamourising nicotine in this country, as almost like some sort of herbal remedy (or the £20 a pack every few days habit as being "my only pleasure sitting reading the Kentucky fried Sun and the Daily Heil, while glancing at poor people fighting each other on early morning TV).


I was that person. I read, drank, are and spewed that shite into the faces of other trapped, propaganda filled to bursting fat fuckers, until one day I found myself weighing up some now long ditched media god's fucking tattoo and his fiery, violent and drunken relationship with Janet-Street Look at Me, I'm famous... What does this fucking Skateboarding, long haired clown matter when the factory I'm working in is now sending its work overseas to be stitched by a seven year olds bleeding fingers? I watched all the pulp the bbc, itv and channel four could throw at me. But did I stop? Did I fuck. But over the years that initial realisation built into recognising  damage the distraction and their lies had on the world around me.


The miners begged and they fought, and they starved and sang and marched while the press demonised them for a whole year. And the police baton charged them and Thatcher and her nasties rubbed their hands as they smashed "the enemy within," us. And distracted us with tales of Boy George and Marilyn and Sigue Sigue Sputnik and Morrissey. Thatcher murdered retreating young Argentinians, while we were entertained by Jim'll Fix It and fucking Rolf Harris. And our industries were smashed, our protective unions stamped on by the Tebbit Jack boot while we sang -a long-a Kylie and are they or aren't they Jason.


One of the protagonists in Videodrome says about the dodgy TV show the population in its world has become addicted to;


“It has something that you don’t have, Max. It has a philosophy. And that’s what makes it dangerous”.


That to me is the fucking rub- ideologies are stamped on- the working class are sold half truths and pretendy science and non-science by billionaires protecting their Cayman Island stores of rotting riches gained by starving people, murdering them and blinding them daily. Education is slowly becoming something only for a selected (self selected) elite as fees that didn't exist in the eighties now soar, ensuring working class young people head for the telephones, Kwikfit McJobs that offer no security, and ensuring they are profit squeezing fodder for those educated only in how to squeeze the proles harder.  Be fucking grateful they give you crumbs and quit grumbling. Robbed of the education our unions in our communities and workers clubs gave, we are their fodder- their targets - with little critical skills beyond weighing up what one fascist rich shit says against another.


The lies Geobals told- the lies the German people lapped up after their defeat and impoverishment post WW1- are being spun in a new way. The world's economy was again, smashed by war mongering greedy bastards- yet the press -the propaganda organs subtly invading your Facebook pages, Twitter, tv and Titbit magazines have a huge proportion of people believing it was the Muslims; the foreigner; the immigrant; the disabled; the homeless; the gypsy and the refugee fleeing from the profit building rain of high explosives, phosphorous, gas and irradiated warheads who have meant your teenaged daughter is on a council house list as long as David "Pinocchio" Cameron's fat piggy nose. In 1983, Cronenberg's weird, at times funny, but very scary film teenaged me watched by mistake because Debbie Harry was in it, predicted the rise of propaganda- or at the very least- how far insidious -invidious- propaganda was going. 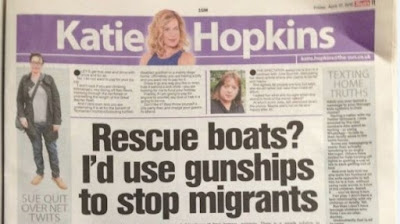 In my opinion, if you believed the Project Fear of the rich Brexiteers or the panicking London elites who thought they were losing cash cow Scotland, you've been Videodromed. Videodromed by Murdoch, the Mail, Sky TV, the establishment within the BBC and the fear and distraction they very carefully create. They ensure your ideology of fairness and peace is stripped and ridiculed and tortured in their Abu Ghraib like pages and magazines and quips and asides as you watch or read them castigate people fighting for you- or fighting for their lives.


Why the fuck would you want a free NHS/education/ mass council house building and service industries ran by your taxes when everyone knows Corbyn loves terrorists and dresses badly-their panel of experts say so. He lies, as does Sturgeon and the lefties in the Yes/remain campaigns who hate our boys and our Queen who works her knuckles to the bone at tea parties meeting plebs who wave wee flags. It must be gruelling. Question the elites place in the world and the Sun will come after you- just ask Gary Lineker who has suddenly become the voice of political reason in a world of Tories calling themselves Labour; and Labour Party members in Scotland voting to keep us shackled to a UK Parliament so corrupt, they can't allow investigation of child rape until all of the rapist bastards peacefully pass away.


Instant therapy: Yoga of the mind.  A friend has told me he buys the Sun because of its football coverage. My tip to that friend is STOP BUYING THE Sun. Yet he wouldn't eat shite. Instead he crams it into his festering, increasingly racist brain. As another friend said to me - if he read the weather forecast in the Super Soaring Shitebag Sun, he'd walk outside to check. The Sun lies. Over and over again it's been caught- not least recently when it was proved to have lied regarding the Liverpool 96. Liverpool is a wonderful place to visit. Liverpool does not read the Sun. Liverpool knows.


Do not read the Daily Mail. The Mail was, before WW2, a champion for Hitler and his British supports. The Mail hates anything beyond the Queens blue eyed white biscuit tin stare. The Mail lies. Dump it, you'll feel better.


Be selective in what you watch on telly- Sky TV is partly (and very influentially) owned by Rupert Murdoch- the billionaire who travels the world without thought or barriers , who approves of poor people being housed in regions unable to move beyond their town of birth. He loves the wall around Gaza. It may be a wall around Liverpool next for the old Digger.


And just start accepting these words... There are shitebags who are white, brown, black, beige, able bodied, disabled, employed, Christian, Muslim, Jewish atheist and unemployed. And a huge proportion of those shitebags only care about how to ensure you keep your head down and don't question how they broke the world's economy or why they started wars.


Shitebags start wars, order young people to shoot/blow up/ other young people. And shitebags will ensure in the coming years, no champions of the working class will be allowed to rise from its decreasingly educated and increasingly indentured ranks. And we'll allow them if we are more interested in talking Chelsea, Geordie Shore or the Beverley Hills Housewives than TTIP, war and justice.


Mindfulness is great- but concentrate on what they are telling you- what they don't want you to know and what is churned out -for profit- to distract you.


Debbie Harry's character got distracted in Videodrome -and it killed her. The ideology of profit and hate was driven by distracting viewers with gore and sex. No questions- just "look at this shite- be shocked and get a hard on, and we'll merrily stock up in the Cayman isles while you wank in between your two McJobs."
Posted by Neil at 07:39 No comments: 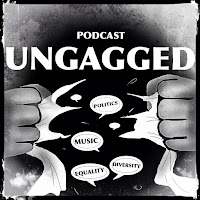 This is an unscheduled, bonus podcast, because here at Ungagged we couldn't just let the vile rhetoric pumping out of the Tory party conference go unanswered or unchallenged.

With music by
Thee Faction with Conservative Friend
Vodun with Bloodstones
And
Dream Nails with DIY. 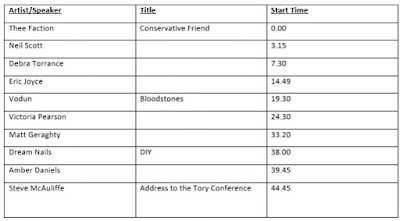