Imagine we weren't lied to?

Don't be lied to. That's the advice I'll give to young people. That is the lesson every child should learn- and then the skills that will ensure they will question everything, should be painstakingly related, experienced, written and learned.

Take one small lie told to me- and told to generations before me. One that is still painfully being unraveled and slowly rubbished.

The political map. The "British" map of the world.

All of the history I was taught was the history of white tribes who conquered each other by brute force and lies, some of those lies persisting to this day (The Royal Family and the inevitability of the class system being what we have been bequeathed by white warlords and power seekers).

As a teacher, I am equipped to and it is much easier to, perpetuate the accepted compartmentalised history I was taught- with a little tweaking to take in more recent politically correct interpretations. But to re-examine and to teach power structures and to explain to children their privileges and their oppression is much more difficult (especially as we must, as teachers, hit targets that our lying -or just lied to- societal leaders have set).

The worst lies we are still working through, lies created by people wanting to solidify their power, are those that mean that white men still dominate our world's  culture- from our law makers, doctors, planners and political plotters through to our architecture, art, farming, marketing and clothes design.


And unpicking those lies- the hidden rest of the world, the women, black and brown people, glossed over history of the Americas, Australia, Africa, Asia and the Middle East -and the "aryanisation" of religion and value, is dreadfully difficult.

My degree was in Film and Media. As part of that, the almost hidden world of how power is perpetuated by those who inherit of are able to buy it, was revealed. Our modern day media and who owns it and how it works, is an important thing to unpick. But history- the history of how Govan, Easterhouse, Drumchapel, Stevenston, The Falls, The Shankhill etc were impoverished; how slavery and the dispossessed became the engines on which those who own the world became our rulers; is a really complex thing to impart.

Inclusion, equity, fairness and truth are what we should have as the mainstays of our curriculum. Instead, the lies of the powerful are maintained.

Our curriculum has been politicised. We have been told that there is one way to teach The Normans, World War 1 and 2, The Stuarts, business, finance, science and we are told not to, perhaps not directly, teach children in Easterhouse, Govan and The Falls WHY they are in those places. Why they are trapped in the grind of poverty. Why they have to work harder than any other "class" in order to escape the social engineering, torture and whims of those who rule them. We don't teach our immigrants that they are important- their history is our history more than Mary Queen of Scots final resting place.


Thirteen years ago a primary seven pupil in my class, on our way home on the bus from a trip to the countryside said to me through tears, "Mr Scott, why can't Glasgow be like the countryside?" I asked her what she meant. She said, "It feels so light and clean. Glasgow is so dirty and it makes me scared."

Another young boy from another part of Glasgow said to me (about ten years ago), "You are from Bearsden. My da' says that's where people from come from to tell us how to speak."


And in those two children's words, the lie is perpetuated. The division of what is ours and theirs and out of reach, and who holds power and whose culture and history is important in our society is plainly present.

As I type this, on TV, a man tells me that a man has committed another murder. This is news. There is no examination as to what lies have created so many male murderers. Let's be clear- there will be tens of thousands of people who lose their lives today. Those who are murdered or die needlessly of hunger or poverty related disease will do so because of the perpetuation of that political map and the White history and power we are taught through school, our media, our culture and our new media.

Literature, education and the democratisation of knowledge over the past thousand or so years has been incredible- especially in the rapid growth of the Internet and its availability in the past five years alone. And I fully believe that the education system we have is running to catch up on the availability of truth.  Far enough behind to ensure those in power can control what we see, learn and know.

Gandhi strived in his life for truth. He used what he could to find that truth- his senses, religious and philosophical teachings and literature. His truth led to the semi- freedom of a nation. Though in the "freedom" of India, compromises were made with the lie that had been imposed on them for generations by the British Empire. And on leaving, the British ensured the Indian people remained divided.

The education of the people of the world, and in particular the dreadfully divided, fooled, misdirected people of the British Isles must be through finding truth. Learning about the clearances, slavery, power, political lies and the interfaces between us and the powerful that perpetuate our place in a system created to ensure thieves and murderers like the corporate CEOs of the world remain our hidden Kings.

The history of our world today- what people will look back to, is the waste of talent and productive enjoyable lives by the "new Royals" floating around the Mediterranean and Caribbean on their million pound yachts; living gated and protected on their walled estates and islands and how their robbery of Govan, Easterhouse, Milngavie, Warrington, Drumchapel, The Falls, The Shankill, the reservations for Native Americans, the Aboriginal people of Australia, the many tribes and peoples of Africa, etc meant huge swathes of people were consigned to dirty, oppressive lives. How others were indebted and fearful. And how many died at the thumb press of a salaried drone pilot or a fooled, impoverished, hopeless suicide bomber.

On my class wall this year will be the words of a flawed working class white man from Liverpool.

"Imagine all the people
Sharing all the world... You...

You may say I'm a dreamer."

But I'm not. I just want the truth. 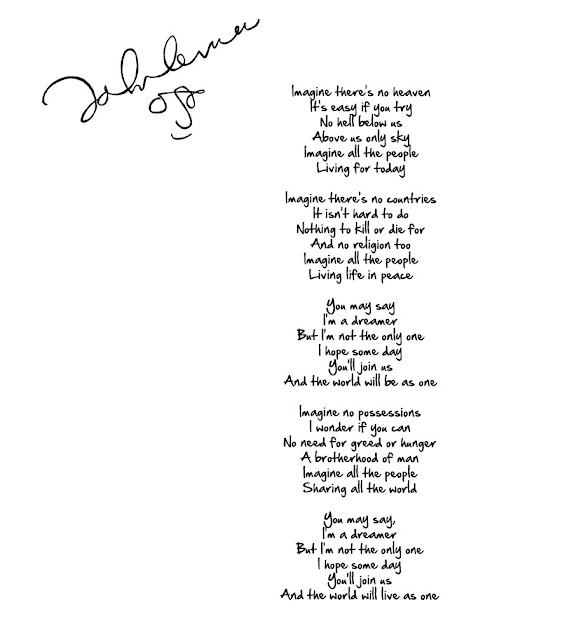