Where are the Scottish Left in the EU debate?

Where are the SSP in the EU debate? Where are those who promoted themselves as leaders of RIC and Rise?

The dreadful emphasis on Rise in the last year has taken its toll on the left in Scotland, not least the SSP- and the huge mistakes of the past year have cost communities an organised left voice in the EU debate. 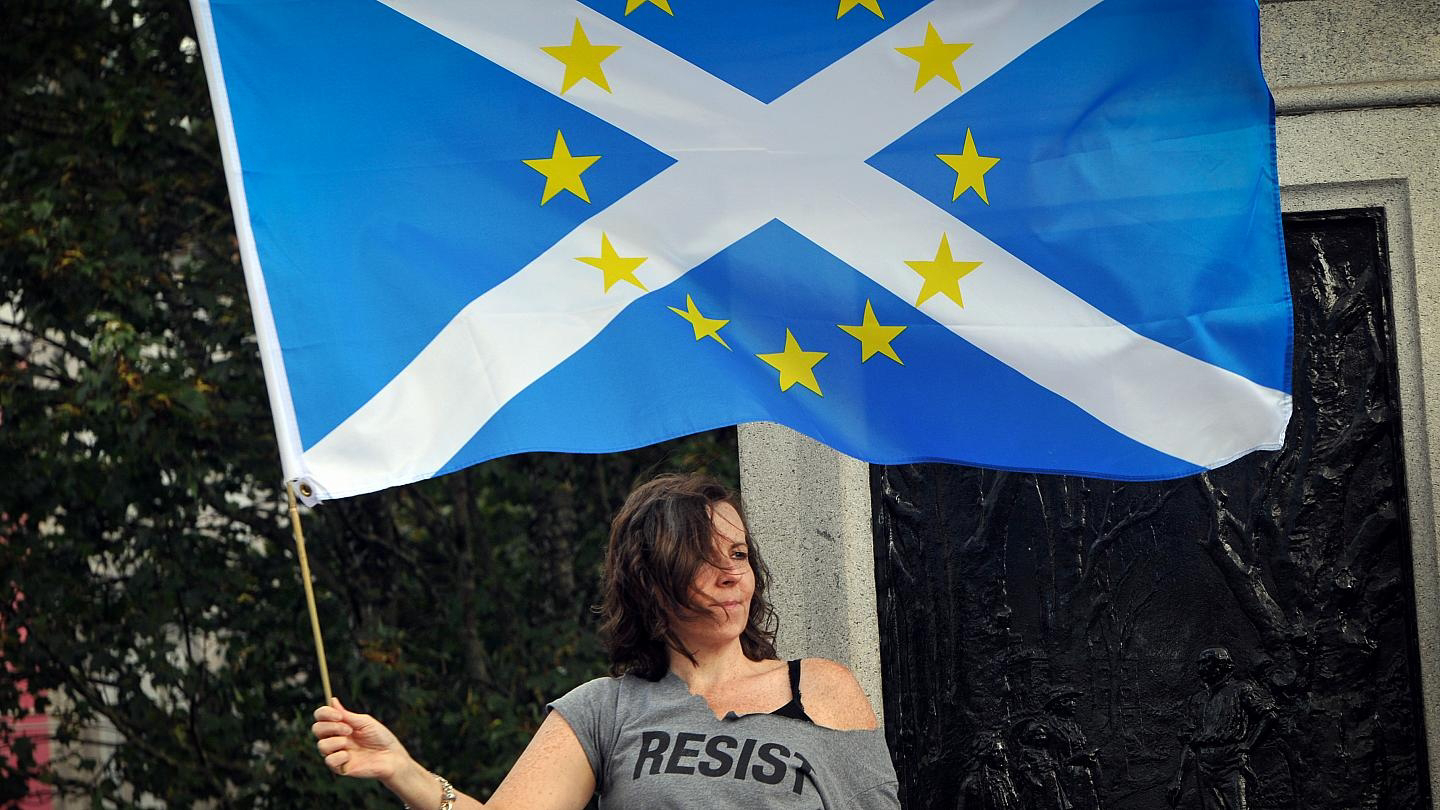 After the Scottish Independence vote, the Scottish Socialist Party had won good faith both on the ground in communities where during the campaigning, activists had played a significant role. They had organised Yes Scotland meetings, training sessions, canvassing, leafletting and other cross party activity, and online through the second to none social media campaign carried out by a team I built. The parties membership rose from a low in 2012 when only 50 people turned up to its AGM, to around 200 people attending last May -our online activity and rebooted access to policy etc brought in many many new members and as I say, a respect throughout the huge Yes campaign.

If you know this history, skip to the parts about the EU.

Then, almost against the will of the party- a motion created to fool members, allowing a group of people who showed no real understanding of the new growth, or the post indyref political landscape, was passed "reluctantly" (the word of the day at that agm!).

The AGM over a week ago was attended by 56-60 people (figures via headcounts), or as the party boasted, 80 (almost as bad as the "leader" of the party boasting he has been the longest serving Scottish political leader...).

Membership is now back in the doldrums, and the people the party managed to pare off during the almost incredibly bad "Rise" venture and campaign are being sent out emails practically begging them to come back.

Some I have spoke to have said they are unlikely to go back given the make up of the EC- it is full of those who firstly led the party to disaster and secondly were part of the angry, nasty Rise campaign that targeted many members (who were attacked online perhaps more than any Tory policy or new Labour nonsense). They have also said to me they cannot allow themselves to fund a party that yet again went for the tactic of promoting a personality rather than politics and policy- what happened in Glasgow seemed to be a Sheridan campaign done badly.

All of this is well known now on the left in Scotland. The SSP really made a fool of itself last year as its National Secretary praised those attacking and threatening people online, viewed by thousands, and the party took the line "taking the fight to the SNP," a line so Ill thought out, yet again members -some long in the tooth- cut ties.

What is telling during the current referendum is how weak the arguments for Remain are from the left. Remain are relying get on Kezia Dugdale to say left stuff on the telly. Instead, Nicola Sturgeon is persuading more people on the left to remain the EU. Where are the SSP?

The SSP formulated a superb pro-EU (with conditions) policy back circa 2007/8. The left within the much larger party at the time, came to the conclusion that the EU could be reformed through making ties with left groups involved in the EU Parliament and fighting for workers rights and for funding that helped create equality throughout the EU Region. The party also recognised that the Parliament needed reformed in order to ensure the corporations who have access to power, were stemmed and ordinary people had much more access to the power of the social and economic bloc.

Now- do we hear anyone give those arguments (and filling in the gaps with figures and data)? No. Why? Because the SSP chose to dissolve itself in a union with people who were as Colin Fox put it to me, "party enemies."

I disagree with him. They were not party enemies. Some are selfless campaigners. But they were dissatisfied with the post- Sheridan leadership's inability to move on from being just anti-Sheridan and not pro-campaigning.

Unfortunately the Rise alliance would not take a stance in the EU referendum, because they didn't want to be seen to have disagreements in the alliance. Some prominent members of the ISG were against remaining in the EU- but this made up a tiny percentage of the alliance. This was a huge part of the problem. They wanted to paint the "socialist" group as United - yet the online arguments and discussions and threats to members, name calling, defamation and silencing showed Scotland and beyond that in actual fact the party and the alliance were very disunited to say the least.

And the party leaders thought that rather than creating online "safe" forums in which members could argue, fight and scrap away from public eyes, forums were "the Internet" and part of the big "social media problem."

Rather than deal with threats, trolling etc, the leadership allowed it to continue in order for them- internet avoiders- to see, hear or smell no evil. The problem, they thought and said out loud- was SOCIAL MEDIA!

Yet the problems prevail. The many views in the ever decreasing party have no outlet, and because of that are censored on a group run by its new woman spokesperson who just last year shut down conversations she didn't like on forums I had set up to keep bams from attacking folk on Facebook...

How could we as a left bloc had a bigger voice in the current EU debate?

The SSP were- by far- the biggest operating left party in Scotland. We had activists working across Scotland- well established branches working in communities with other political activists. And we HAD respect. Our working class message was copied by RIC (a group which, on the ground, was peopled by OUR activists) and in meetings across Scotland in the 2 1/2 year lead up to September 2014, we changed the focus of the debate from solely economic as the snp/ business for Scotland etc wanted, to one focussing on the social -issues of poverty, or as Rosie Kane put it in a meeting in a wee scout hall in a village outside Glasgow- "how and who to spend Scotland's riches on."

If the current SSP leadership had not have dissolved the party into the dreadful alliance, the SSP would STILL have those voices in community organisations they were part of and the left argument for remaining in the EU would be in Remain stalls, just as our argument for independence wAs on Yes Scotland stalks across the country.

The EU debate in Scotland totally lacks the perspective of a party that is wholly for working class and victims of Tory austerity. TUSC, Galloway, the Labour Party and others on the left  have totally embarrassed themselves by getting involved in the right wing driven "controls on immigration" shite.

The SSP has a superb stance on immigration- one that welcomes new Scots open armed and offers succour to those running from their homes in fear. Those voices are not being heard.

What do we do in future? The SSP at present has placed its future on hold. It has silenced dissent by giving those who advocated censoring voices, power. It has kept the old guard in place- an old guard that led the party into the Scottish Screaming Syriza. And it refuses to recognise its failure and analyse where it went wrong YET AGAIN as the leadership say over and over -"we are were we are," a way of saying, "forget last year- we have another cunning plan you will "reluctantly" allow us to sink you with.

Scotland is at a political disadvantage without a good working class analysis of the EU debate. And while the SSP continues to exist in its bubble created by those who created Sheridan and the mess last year, Scotland will be relying on the SNP, the Greens, Labour and the Lib Dems to challenge the Tories. All of them have a record of giving in to austerity measures.

The road back for the Scottish left will be a long one, but an SSP made up in the way it is at present, will become an ever decreasingly important element of that, I'm now convinced. I feel the left will reform- but through grassroots and community organisation FIRST- not through motions from a distant EC or a Circle, rotating around Scotlands new "socialism personified" face.

I feel local organising- making links across parties for local campaigns is imperative- especially if we want to have left perspectives as part of the approaching indyref 2 or the next stage of the EU debate.

The SSP leadership let us down in the last year-let many hundreds of activists down. I feel if the SSP are to evolve- the party must ditch the "leadership" and branches take control.

Politics in Scotland will be degrees of Neo-liberalist austerity if we don't get our act together.
Posted by Neil at 12:06