The King is Dead 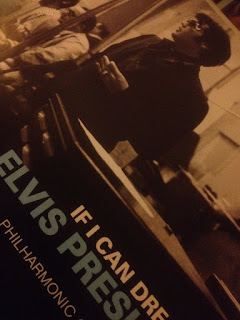 I remember when Elvis died. And the world didn't stop. But the world changed, for me.
Clark, Alan, Alistair, the English twins and others, left my life. They were still alive, but at 11, the system meant we were driven apart. Separated by verbal reasoning tests.

When I was a child, I thought of TV and pop stars as Gods. People who came into your house and who you talked about and heroised. I remember my friends and I talking about what might happen if a superstar died. I remember thinking that the world would just stop! These were people who, surely,  made the world go round. An incestuous, almost intangible world in which they spoke to each other, married each other, sang to each other, were in magazines and tabloids together and were never seen in real life. They were from planet TV. Planet Holywood. Tabloid Town. A place so sunny and happy, we were imperfect subjects, incomplete, unlike the Gods.  Subservient, deferential; the worker bees, buying, sharing, sanctifying the product of their genius and talent. Our lives in the shadows beneath their feet.

Elvis seemed different. He was apart; living behind the gates of Gracelands; a place fit for a King - with its walls of TV's, food and drink and music and friends on tap.  A man blessed; a man even the stars genuflected before.  But a man who had known what it was like to be poor.  From the ghetto... or the dustbowl equivalent. A man who was surely an American Jesus.

There was something very tragic about him, even I could see that. I remember going to get my hair cut and reading a tabloid while I waited. Elvis, it was rumoured, was taking drugs. Photos of him, bloated, sweating, dying were contrasted with photos taken just a few years previous looking healthy, fit, lithe. The recent photos were not the Elvis we watched in the morning during holidays in his summer, happy, formulaic films.

I remember thinking, "Someone will help Elvis. He'll be OK!"


The next visit to the barbers showed that this hadn't happened. More revelations about Elvis. Someone who knew him had said he was killing himself with drugs and food. And people he knew were implicated.  It couldn't be the fault of the King; that God, that innocent from the sticks.  He was being killed by other forces.

And then one day, when dad and I went to the Ulster Grand Prix, on the car radio, the news of Elvis' death began to filter through. And I thought, "the world will be in bits!"

I thought my mum would be upset. But she wasn't, when we arrived back home from Ray McCullough's win; from Tom Herron's return; from Joey Dunlop's Hares Leap bounce, my nanny and grandad were in our house, having a wee vodka or liqueur, a cup of tea, bracken, wheaten, soda, jam and a biscuit, as they were every Saturday night and there didn't seem to be any tone of grief or morbidity. No one seemed to miss him.  This was not a house grief stricken like those outside the King's big white gates.  We only had his films.  We heard only his voice still alive, still happy in Hawaii.  Elvis' death was as far away from our reality as his life had been. The Stars told us he had been their biggest influence. He hadn't been my dads - his had been his mum and dad.  He wasn't my mum's - her's were here in my living room, laughing, sharing a joke.

Elvis died at a time when my life changed. It was the last long, hazy, lazy summer my primary school friends and I were together. Shortly after his death, We were split up and we went to intermediate for us eejits and grammar, for the snobs. Or so we said.

Though one friend remained constant, Mickey Neeson, who had always went to a different school. We were different since birth. Our descendants belief in Empire over King or vice versa, meant our friendship was one that was after school. My cool friend. The Fonz personified. Always happy, always positive and someone who influenced my political thought more than he or I could have known back then. Mickey was still Mickey. We cycled with a new found, more mature freedom to my Granny and Grandad's miles away out of town, in Tullylish, and watched saturday afternoon wrestling with Mickey's aunt and Big Daddy in Lawrencetown. And ate boiled sweet peanuts amongst the grass at the top of the big hill. And for a few days more, my primary school friends were not wrenched from me by way of different uniforms and a sense of being better or cleverer or not. Girls looked different and Blackpool in July, with my sisters Karen and Margaret, my mum and dad, Nanny and Grandad, cousins Ian and Amanda and aunt Lorna and Uncle Ian, was even more beautiful.

Elvis was dead. And his films brightened our mornings. His music played, tinny, mono from small radios and other stars spoke about him and their world. It didn't change that much. They were still far far away. But my world was about to change.

The world continued to turn and the King was replaced in the tabloids by others. Lee Majors, Farrah Fawcett, George Best... they were the new incestuous golden families. Parkinson laughed as comedian and Carry On star regaled with story and revelation.

And this Christmas, my son bought me Elvis' latest album and I remember the summer before it all changed. Elvis didn't influence me, his death didn't touch me too much, but those around me that summer certainly have. A last summer of security and with everyone around me I loved.
Posted by Neil at 09:34