The fight against Scotland's nukes is an internationalist fight.

I'm not a nationalist. Neither is nuclear fallout, radiation or indescriminate weaponry.


The odd thing about those from SNP, SSP, Greens and those with other political outlooks who campaign to kick Trident into history is that, even though the huge majority of them in Scotland are pro- independence, their anti nuclear stance is far from nationalist.

A few years ago, I was driving towards the England Scotland border towards home in East Dunbartonshire. As I sped along the road, I caught up on a car that was flying a huge Jolly Roger and had signs stuck all over it proclaiming danger ahead, nukes out and "Death to Trident." The to was scored out and replaced with "with."

I soon caught up with the deadly convoy the internationalist was warning me about. Grey lorries, carrying a deadly nuclear cargo through towns, villages and the English and Scottish countryside. It was the first time I had seen them, and their menace reminded me of the time I was in a traffic jam behind a military landrover in Belfast from which a squaddie was pointing his gun straight at my car as I pulled up behind them. Unlike the worry that a single bullet may hit me, the thoughts of an accident as I passed the lorries and crossed the border, made me worry about my family and friends.

The dangerous convoys of nukes still make their way through our towns and villages - the most recent videos are HERE. 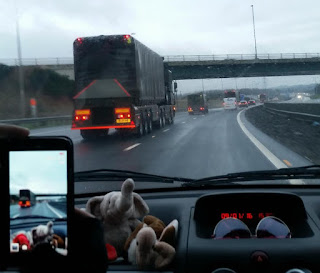 Nuclear war or accidents know no borders. And our fight to rid Scotland of the weapons (and the energy) is an internationalist fight. It is one that, WHEN won, will make our whole world that bit more safe.

I have been a body amongst thousands, protesting at Faslane, on George Square and writing letters, making banners and videos protesting these vile weapons and the costly, dirty and deadly energy. CND was the first "political" organisation I joined, 36 years ago when I lived in Northern Ireland, a place without nuclear weapons or energy. But it was during the Cold War- a time when we all knew the internationalism of dreadful war and the ultimate weapon.

If we in Scotland manage to kick Trident off the Clyde, I will still be a CND member. I will, like that single car protesting that deadly cargo crossing the Scottish border, protest the existence of these murderous weapons and these dreadful cargoes endangering our world, wherever they are housed.

Be an internationalist, join CND and write to all of your representatives protesting these convoys and the existence of these weapons. It's a fight for the future of humanity.