The Day Before the #indyref (a short story)

As people rush past, Chuckles sips his coffee and stares through the large window onto Buchanan Street. His expensive coffee is his last of the day. As far as all of this rushing, consuming horde are concerned, well, they've rejected him, they don't notice, so he has every right to criticise and laugh into himself at their ignorance to his plan.

Helen dips her finger into top of her frothy coffee and stares at the man in black sitting across from her table and wonders about the interesting thoughts he must be thinking. She has seen him here before. He never seems to notice anyone, his stare always seems to be reversed. Staring back into the infinity that must be his mind. She loves to speculate on what everyone's lives are about. She guesses he is an artist of some sorts. And lonely.

Chuckles checks his phone. It is nearly time. He must be on Hope street for 5.30. It is 5.15. He has all of the stuff he needs. His phone, his bag and its soon to be criminal contents. He unfolds his newspaper. It has no doubts. Like all of the newspapers in Scotland today.
Helen watches him unfold his paper. She reads the headline. It is about tomorrow. She wonders if the man in black has the same opinion as the headline. She stopped buying this same paper because of its views on Scotland's day; tomorrow.
He looks towards the Buchanan Street steps. A battle of PA systems, Yes and No signs and flags has broken out. The crowd are singing at each other and the media thrust microphones in front of red, alive, intense, faces. He chuckles at their certainty. 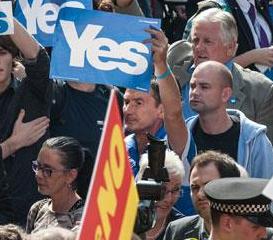 She watches him, puzzled. He turns, his dark eyes darting from left to right. The traffic stops and he launches himself across the road.
In an office across from Kelvingrove Museum, one of Ruth Davidson, MP's office workers opens the envelope and reads the short sentence out loud and shakes his head as he sets it aside.
Susanne in the Yes Bar passes the letter to Jim, her husband. He reads it and chuckles.
Rob looks puzzled as he reads the neatly written sentence and passes it across the table to Blair. The Better Together offices have never been so busy, and he is tired, so perhaps he isn't focussing on what he has just read. Blair will sort it out.
Deputy First Minister Nicola Sturgeon is handed the note as she leaves the BBC News set. She scans it and quickly hands it back to her researcher. They both look puzzled at each other and then smile. The coming weeks are going to be out of this world.
Ross Greer of the Greens stares through the Yes office window. He marvels at the fact the graffiti artist is spraying the words backwards so they can read them inside. They are the same words he read this morning as he went through Patrick's mail.
As Chuckles runs across the road laughing, Helen reads his message backwards.
Scrawled in red paint is, "Mibbees aye, Mibbees naw."
She runs into the road and stands in his way.
He stops, shocked. Is she MI5? Is she a mad Scot or Brit nationalist about to chib his throat? Her eyes are as emerald green as her hoodie and they pierce his soul. She smiles. He smiles nervously at this angel who has noticed him.
She looks into the darkness and knows she has work to do.
Posted by Neil at 03:03 No comments: