Independence, @The_SSP_, the next indyref and me...

Today marks the anniversary of the most exciting day I have had in politics in Scotland, since I moved here twenty years ago. 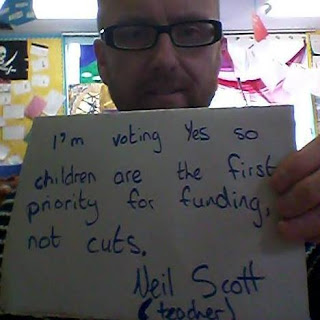 A wee article I wrote about one of the big YES rallies is HERE, plus a link to a photo essay i did of the day...

The Independence Referendum and the two year campaign I was part of, will go down in history as the single most transforming event for the British Isles in the twenty-first century.

At the time the independence campaign kicked off, I was already committed to Scottish Independence, and had supported the notion since the mid-nineties – shortly after I moved here. I am originally from Northern Ireland and the inequality there had ensured I was a socialist. Although I am from a unionist background there, I have supported independence for Ireland, since my late teens. Although I really did not support the kind of “protest” the paramilitaries exercised there, ie. Murder and mayhem, I supported a socialist approach to the problems, that is, if inequalities of power, finance etc could be addressed, the island could peacefully move towards independence from the UK state. 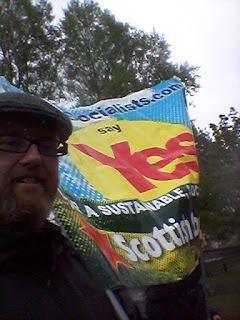 My support for Independence in Scotland began when I first arrived here to go to Stirling Uni as a mature student. Some of my new friends here lived in parts of Glasgow, like Sighthill, Yoker, Govan and Easterhouse – and the housing and poverty left by the devastation of Thatcher made me think, if a people were oppressed, these people living in areas sandwiched by Bearsden, Thorntonhall, Newton Mearns and Busby were certainly oppressed by the huge inequalities obvious for all to see.

My support for independence has always been about addressing inequality and poverty. And to me, the Scottish Socialist Party where the only party truly committed to that aim. The SSP were convened in 1998 as a party for Socialism, Internationalism and Scottish Independence (and as a republican party – which unusually I suppose, for a proddy mid-Ulster man, I have been again, since my teenaged years). As a branch organiser of the Scottish Socialist Party, we invited the local Greens and SNP around a table in 2011 and we worked out how “Yes East Dunbartonshire” was going to work. 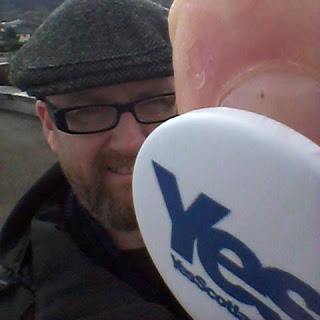 Working with the other parties was a mixed bag – some of the activists I now count as personal friends- though, like all parties have, there were the “roasters.” Unfortunately it was a few roasters who insisted on bullying a local teenager who was a prominent Green Party activist and who also (against the spirit of the joint campaign) invited the unapologetic misogynist, Tommy Sheridan to speak. These meant the East Dunbartonshire Yes campaign had to split into three geographical areas, who although worked independently of each other, all were tied together by the three political parties. 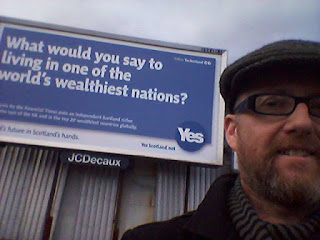 In order for the SSP to ensure the voice of the Greens and those who wanted our campaign to continue as one addressing social and economic inequalities, we formed a local RIC branch that went on to bring Jim Sillars to Kirkintilloch, lead street activism across the constituency and into the Campsie Hills – and even managed to “photobomb” the evening news with a banner made by activists that was used across the countryside and off the side of the Squinty Bridge in Glasgow!

The SSP were highly active in East Dunbartonshire during the referendum and hopefully complemented the brilliant local campaign (I would not have admitted this at the time!) by the SNP – and in particular, the irrepressible Fiona McLeod MSP. 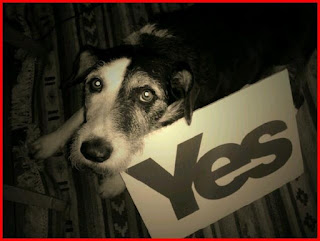 On the 18th, my SSP branch was active across the constituency again, outside polling stations and on the phones, getting the vote out. I worked with my SSP comrades across the constituency (and into Maryhill!) alongside a brilliant last day campaign that because of the weaknesses in Yes Scotland itself, were coordinated by the SNP and activists such as the superbly hard working Ross Greer.

As the day wore on, I did get a bad feeling of what the result would be – the hollow shell of the Labour party seemed over confident – a member who was pro-independence said to me that the bussed up activists, local branches alongside the local active Tories and Lib Dems had ensured East Dunbartonshire would vote no. We knew that would happen – and had hoped to get 40% for Yes – which we did. I really hoped against hope that the rest of the country would see sense. 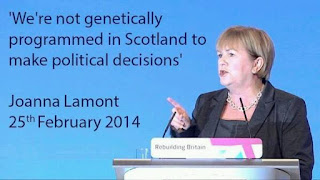 The count was devastating. Not least for the Labour Party activists cheering and hugging their Tory “enemy” every time an area declared for No.

I left the count at around four am – before the official announcement. I could not take the sickening “comradeship” of the Labour Party, Tories and Liberal Democrats a minute longer – nor could I stomach the declaration as these bastards tore down all hope of a better Scotland.

When I arrived home, I watched a bit of the rest of the referendum night on tv. I sat, totally devastated, trying to comprehend what had happened. The hopes of a generation dashed by fear and by greed.

How was I going to tell my wife when she woke that we were still under the cosh of the Coalition Government and in particular the Tories?

As dawn broke, I realised this was a fight only just begun. This was not finished. This had been the opening battle in the war against poverty and greed on these islands.

And today I am again filled with hope. The Labour Party is transforming itself back to the party of the people it should be. Hopefully soon, the Blairites and Brownites will be banished into the history books (or the Hague) and sense will prevail. A Labour Party reborn and for an independent, fair Scotland could be on its way after they are over the attacks from the Project Fear they had helped design.

I see hope in the realignment of Scottish politics. Some in the SNP at the start of the independence campaign told me a focus on business etc would win the referendum. I am glad to say that after some of the local meetings in our area turned into proper political discussions about redistribution, green issues and local poverty, many in East Dunbartonshire changed their focus to social and economic equality.

I particularly remember a meeting in Westerton to which we had invited Business for Scotland leader, Gordon Macintyre Kemp and Socialist and Women for Independence activist Rosie Kane. Macintyre-Kemp, while making a coffee in the kitchen in the wee hall said to me words to the effect, “the SSP’s message will not have any impact in this campaign.” After the meeting at which Rosie got the biggest response – especially after her opening words of, “he (Macintyre Kemp) can tell us how we make the money – I’ll try to address what it should be used for…” I was glad to see Gordon during TV interviews, focussing on just that. The onceanti-independence, ex-tory supporting Businessman saw the sense in the SSP approach – ie use our huge wealth to address inequalities.

And I see hope in the SNP addressing inequalities in health, education and through heading off some of the Tories worst policies like the bedroom tax. The rest of the UK is looking at our wee corner of these isles with envy as our education is still one of the best systems in the world – and getting even better; our health service is fending off the privations of privatisation and our young people are not saddled with the huge debt the Tories have managed to impoverish a generation of students with. Of course, as a socialist, the SNP’s current form is only a beginning. 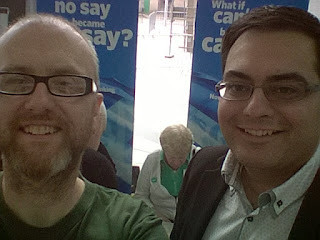 Unfortunately the SSP has not used the new surge in support for their policies as well as some had thought they would, instead deciding to try some sort of alliance they have called Rise to take on the SNP and the Greens on turf they should have stayed away from. Rise as it exists now, is a small, sectarian coming together of ex-SWP, the SSP and a few smaller groups, but led by people who whisper, “don’t mention socialism and don’t be too radical.” I have now left the SSP, hopefully only for the time being, as dissent from the view of those pushing this, in my opinion disastrous new group, is not tolerated and in fact some within the party (and without) have resorted to bullying tactics to ensure the party/alliance line is not diverged from.  And all for a small "leadership" to help shoo in their preferred successors...

When the next referendum is announced it remains to be seen if I will be helping as a member of a political party. But I’ll certainly be helping. And the next time it will be towards the goal of an independent, socialist Scotland – unashamedly. 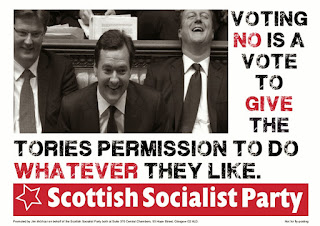