I haven't wandered Belfast's streets for many years, having left Northern Ireland in my mid-late twenties (over 20 years ago!).  It's a changed place – I had favourite haunts back then.  The Mandela Hall, the Bot, The Eg, The Crown, Robinsons, The Empire, The Rajput, Lavery’s, The wee French place (Frogties?) on Shaftsbury Square, The Mexican Cantina, which used to serve the best deep fried ice-cream I have ever had – and served by my two favourite waiters of all time – my friends Madeline and Una, and a greasy joe café whose name escapes me I used to dive into for a fry before driving/ getting the bus back to Banbridge after a particular heavy night…

Times have changed.  Belfast has changed, and so have I.  The “Golden Mile” no longer means drink, madness and party – I no longer drink and nowadays, I don’t eat meat.  So on my quiet return to the streets of a shinier, less dangerous (not that danger ever put younger, brasher, me off), but certainly more cosmopolitan, safer, beautiful Belfast (and one in which every turn brought back memories of people, party and wonder), my wife and I had to find a vegetarian eaterie.

We did the sights, we heard the street music and we chilled in the spring sunshine.  And I rediscovered my past and bored her with silly incidents from my late teens- late twenties. And we googled vegetarian restaurants.

In Glasgow, this is not a problem.  We have restaurants that thrive serving vegetarian only menus.  I thought we would struggle to find anywhere in steak, spuds and Ulster fried Northern Ireland.  I was truly, pleasantly surprised.  There were a few places on “the strip” that had vegetarian menus.  We decided to try Kitch.
When we went in, we were met by a friendly, very enthusiastic waiter.  He sat us down at a wee table by the wall.  Let’s start negative – the seats were uncomfortable.  Jim – get some cushions for those.

The menu we were given had a few vegetarian dishes on it – but not enough to take our fancy and we decided to leave.  She said, “thanks, but there aren’t enough vegetarian things on the menu.”
“But we have a vegetarian menu!” Came the answer.  We took a look and we were stuck for choice!  Something in the few days we spent in Northern Ireland we hadn’t seen anywhere else – a menu for vegetarians with imagination.  With more than goats cheese and risotto.

We were impressed and hoped the food would live up to the music, the quirky décor (Jim – if you are ever in Glasgow, check out The ’78 or Mono or Stereo – shabby chiq and with something Kitch could add – a venue… a place people meet to listen to music and eat good food and drink good brews both alcoholic and non-alcoholic) and the brilliant welcome and craic we had with the manager, James Connolly.  A great name – an Edinburgh name that made these two political animals feel at home and chat that really made us relax into the more comfortable seats we asked to be moved to.

And then the food arrived.  She had Chargrilled Haloumi, I had the Feta Fritters with honey and balsamic vinegar.  She wished she had got what I got, I was glad we shared – both dishes were heaven!  The fritters beautifully crisped on the outside and creamy on the inside – the honey and balsamic helping create a sweet and caramel sapor. And the non alcoholic cocktail mixed for us by the waiter matched anything from said Glasgow restaurants.

Our day in Belfast had been to explore the old (I thought there should have been a plaque on the wall at the site of “Good Vibrations,” the shop from which I still have some of my indie vinyl), and the new -  the statue of Lenin outside the Kremlin nightclub really cheered me up (and also the fact it was a gay club – a sexuality we were told twenty years ago did not exist in Northern Ireland)!  Also being able to walk past Ashers and feel I was doing something political by deciding, even though I was choking for a coffee, I would boycott the “anti-gay cake” restaurant.  And a fizzy water in the gas lit Crown (she had never been).  And visiting the Ulster museum to find my Great uncle James on video (he’s in this BBC documentary).  The staff there – and in particular one woman, were so helpful, friendly and again – interesting! 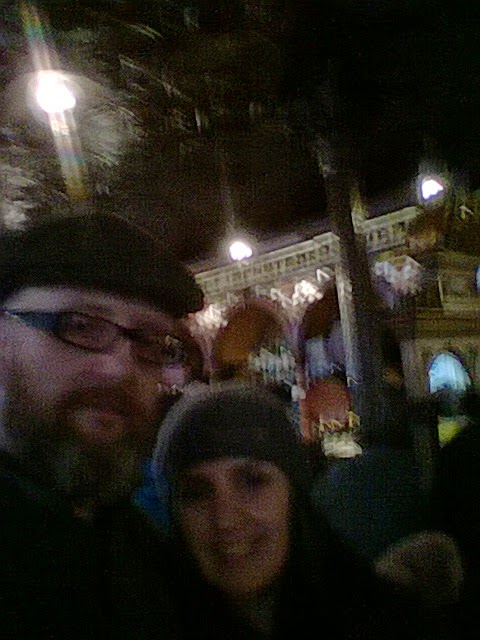 A fizzy water in the Gas-lit Crown...


Relaxing, and talking about oul’ haunts and characters with Jim in Kitch over great food just finished off the day in which my wife discovered and I rediscovered and updated my past, superbly.

The main course was imaginative, tasty and filling.  The Sliders were a great idea – three wee vege-burgers all of different types (I had one of each – the 3 spice burger, the piri piri tofu and the cooling portabello mushroom and goats cheese), served in a wooden tray were spicy, sumptuous and moreish.  Again, service with a smile and chat and the place by this time was filling up.  It seems it is the new place to be.  She went for the Risotto – something I TRY to avoid nowadays, but having tasted her’s, I would not avoid the Kitch risotto.  Compliments to the chef’s all round.

We dared eat dessert – the dieting for summer would start next week – she went for the choc brownie and ice-cream and I went for the Lemon Posset and raspberry – and can I say, two and a half weeks later and I am still craving it, I still taste the beautifully thick, creamy, tangy ambrosia!


If you are in Belfast and you haven’t discovered Kitch – go relax there.  Go chill, eat, be entertained and experience.  The staff are interesting, quirky, helpful and really hard working.  And chat to Jim.  He’s great craic.  If you are a tourist – there is no better place to find an alternative to the steaks, spuds and goats cheese…
And Belfast – it was lovely to see you shine!
Posted by Neil at 05:20 No comments: