It is an absolute disgraceful decision of New Labour controlled Glasgow City Council to blow up working class affordable social housing as a firework display. History, culture, welfare, smashed, bulldozed and buried in the name of entertainment.

Cultural vandal, Bridget McConnell and Scottish New Labour are a disgrace.  This shows Scottish New Labour's attitude to the working class and to the asylum seekers who will be housed in the last building left.  We need more housing- not less. And how inappropriate a message is "one of Europe's poorest cities blows up social homes for a cheer?"

A spectacle the well heeled Mrs Lord McConnell (nearly 200k per annum) and her now rich husband will gleefully watch and then fly guests to stay in their holiday (second of three homes?) home an Arran.

In the name of entertainment, I would be surprised if the same decision was made about Buck Palace come the Republics of the British Isles.

The council should demolish them in a dignified way- not this message to the world and to Scotland that "your lives and stories were so unimportant that we are going to make them into a sideshow." And "this is what we do to social housing while we charge poor people for having more than one bedroom." And "these homes are only fit for the media and politically scapegoated poor immigrant." This is a disgraceful way to treat working class culture and new scots. And in my opinion it shows a real contempt from the middle class, well off Labourites who control Scottish New Labour, for working class lives. Its not the first time McConnell has exhibited this level of cultural contempt for Glaswegian working class people. But then, it is the aristocracy and upper middle classes who are the "social vandals/engineers" who cheerfully herd working class people from clearance to clearance.Where was the consultation with those who lived, played, loved, discussed, argued, drank, ate, ran clubs, did politics, watched telly, hung out... there? There certainly can't be a balanced one now. This stupid, insulting plan needs to be quietly forgotten and the people who have their memories -good, bad and banal, - of the Red Road Flats, should be allowed to mark the passing of their past as quietly or noisily as they wish without New Labour using it as a cost cutting fireworks display for dodgy world "leaders." I tend to agree with my friends who have lived there. I have bad memories about some places I have lived, but would hate New Labour to trivialise my experiences by creating a show of wiping out my past. 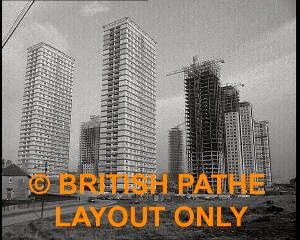