No Campaign jump the shark...

The scare stories are just becoming more and more ludicrous from the no campaign's #projectfear. Now they are suggesting a Yes might throw Northern Ireland back into the darkest 70's and 80's troubles.

A yes will get rid of these careerist numpties who will say anything for a Knighthood.

...again. Our favourite place to chill! 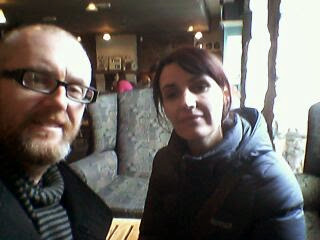 On Saturday, I spent some of my time with Rosie Kane, the ex-MSP. It was a really enjoyable morning. Rosie is good company. She is one of the kindest, most honest people I have ever met and she spoke at her first political meeting for seven years on International Womens Day. After the abuse she suffered thrown at her through the press by Tommy Sheridan, and the abuse he threw across court TWICE at her and other women, I feel a real sense of betrayal when I read a Scottish hero like Ian Hamilton is helping this man resurrect a career on the back of Yes Scotland. I know that the main body of the campaign are not falling into the trap of  platforming a man who publically humiliated women in court by questioning them on their sex lives and who branded comrades "scabs" for refusing to lie for him in order for him to protect a lie of a public image and to profit from  being litigious.

Tommy certainly has a talent - a style of oratory left behind by most in the seventies. And his is not the only career being revamped on the back of the independence debate. But Sheridan not only brought down the most successful left wing project in years, but tried to force those who once counted on him as a friend and comrade to lie and cover for him and branded women as witches - and worse - for not wanting to be used as cover and as "accomplices" in his abuse of vulnerable women.

Sheridan was proven guilty of lying in court and has never apologised for what he unleashed on the likes of the wonderful, gentle Rosie. He is hardly a man to lecture to us as to what a future, fair Scotland can be like. I beg Ian to reconsider being part of this reckless, misogynistic, disloyal man's lie of a world.

Creating and nurturing a platform for this most untrustworthy man can only backfire on our noble, principled campaign for an independent Scotland.

A couple of wee observations...

Is the Ukrainian thing a wee show on telly? At the end, when nukes are seemingly about to be launched, do Putin and Obama do jazz hands and say, "and that, folks was a modern day interpretation of European events 100 years ago to show you how easy it is for imperialist, unstable world powers to sacrifice millions of people for markets..." and shake hands and backslap as they announce a new era of real world cooperation...

and in meanwhile Scotland...

As the no-ries step away from their "virtual victory" on their TV stations and billionaire owned press, it must be so comforting for them to get back to their VR TV world of denial after ducking through Yes activists on every street... #indyref