Rosie Kane has a thread on her Facebook on which people have been writing where they were when they heard about the passing of Nelson Mandela. This article started off as a post there. 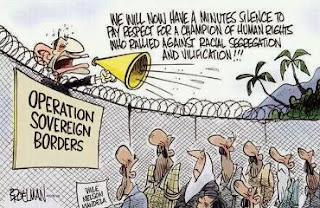 I think Mandela's passing will, of course, be remembered. His life, and those who fought alongside him; his ANC comrades; the many women who fought this dreadful system; Desmond Tutu, Steve Biko, Winnie Mandela and all of those who lost their lives in the struggle and never saw freedom and what they struggled for, will be remembered longer.

I truly believe that the legacies of Mandela and Gandhi will be viewed, reviewed and ultimately thought of as people who began the 'new time' when good first began to crush might and greed. Neither man succeeded in creating utopia- but the struggle and victory they both symbolise will, in my opinion, be seen as the first steps towards a fightback. Three steps forward, two back - and both men understood that.  Some on the left have yet to understand that when they criticise. Changing this world will not fit exactly the left sect programme the critical mind belongs to.  I read online and hear at meetings criticisms of political fighters who have given their life to struggle that I can hardly believe.  The usurping of the Mandela legacy by the right will rely on the criticisms from the left.  Mandela understood that.  He explicitly said that he was no saint.  He was a sinner who did his best - as all of us should acknowledge we are - even those of us who prefer not to use religious language.  In other words, he, like Gandhi, was flawed.  Lots of these flaws are flaws of their time, generation, culture etc.  Some are personal, socialised flaws.  We all have them.  We don't all give our lives to struggle like these men did.

I read about his passing on twitter last night, nursing a sair foot after falling through a school stage.  That, I will remember in the same way feeling rubbish after an argument with my new wife in September 2001, or feeling a bit hungover watching the Berlin wall fall through my small portable telly lense or shivering in my digs in Dunblane when my mum phoned me to tell me something dreadful in 1996 or when my grandfather, the same age as Mandela, passed away. All of these events were dreadful or hugely historical or personal and all of them I remember every detail around me. I will remember the papers on the seat around me; my laptop and and my sair foot.

I wore my Makana FC top to work today (Nelson Mandela's footie team when he was on Robben Island) and told my P3 class today about why he loved Glasgow so much and why he thanked the city.  I got all choked up and a wee girl cried because I did.  I will remember that.

Mandela and the struggle against Apartheid, and my small part in that as a young teenager through to my early twenties (writing letters, sending money, marching),  helped me understand my own country (Northern Ireland) when I was younger.  I remember sending away for a report by some organisation about South Africa when I was in my early teens. The organisation had the foresight to send me a report on the island of Ireland. Stark facts, figures and raw data on housing, wealth and poverty. They made me think. I read the world I saw was flawed. The vista was a green baize patched with cheap paint. A rhinestone studded shiny plucked cloth covering a festering mound of poverty and elitism. I will remember that.

The struggle against apartheid united many right thinking people across the world then, and at this moment in time.

The struggle isn't over as the Tories and right wing parties are on the rise defending their riches by deepening our impoverishment; and people are incarcerated in disgusting holding centres for no other reason than existing and wanting to escape poverty.  This is our fight.

The struggle against apartheid continues in Israel / Palestine.  This is our fight.

This is our part in the fight. Exposing wrong and smashing it.

The past- the Cameron's and Thatcher's (who he refused to meet) and Tebbits and Farage's and Bush's and Reagan's etc of this world were wrong and have no place in the celebration of this mans life. This mans fight is our fight.

I will remember him. Madiba. Tata. 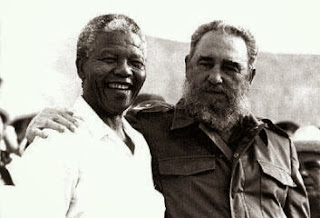