My wee bit about Russell Brand

"Hey! Revolutionary socialists! You are much better revolutionaries than me. I quite liked Russell Brands rant. I'll step aside now and allow your revolution by formula to continue."

This was my facebook status yesterday. I was angry - also tired and grumpy- at the many lefties on my timeline picking over Brand's life, words and hairstyle.

I've already written about Brand and Paxman- the clash of the hirsute - a few days ago. I don't agree with all of his "solutions," but hey- his analysis of working class representation in public life was the best I have seen on the Public Schoolboy Broadcasting Corporation, for quite a long time... Well, if you don't include the unedited Darcus Howe footage from the anti-Tory/anti-brutal policing riots a few years ago...

And it was delivered with enthusiasm to a Paxman who for once, really didn't know what to do with it. I'll save my opinion of Jeremy for another time- let's just say some of the nonsense he has recently been spouting regarding World War One Generals and rich officers is straight from his middleclass, privileged heart.

After a long couple of threads, she said, "What if I agree with what Russell Brand says sometimes, but think he's a total bawbag... Thats ok... Eh?"

Which is again, fair enough. ( I hope she doesn't mind me quoting her...) It ended up, I probably agreed with Rosie, on most counts, though I err on the side of what he said I don't only (mostly) agree with, but think it was really important he did- even though he was plugging a comedy tour.

I don't know what he is like outside his TV/film personna, but I kind of think if he was 'in my gang,' he wouldn't be the member I'd sit beside at the bar for pre-clubbing drinks (back in the day when I did such things). I think now that I don't do such things, he would be the member of the gang me and the rest would say, "do you remember when Rusty used to..." or "Rusty was a wild man..." Rusty would not be in our company as he would be away being an international comedy God and had texted us before hand to say, "can't make it guys. Am meeting Bono for a pint and a curry in Reykjavík to give Bjork a bit of support in her new vegan cafe... Love yiz!" We'd sit there and sup our huge Costas and be secretly, even from ourselves, as jealous and resentful as fuck, while saying, "he was a lig!" Anyway, you get the gist. Nice bloke, but probably would annoy the fuck out of me.

He aint the messiah... But he confused the feck out of the public school boys and girls of Newsnight."

Lots of the left criticism centred on his undeniable sexism, his wealth and his being set up, or setting himself up as a hero.

What none of the criticism I have read  takes in to consideration, in my uncared for and uneducated opinion,  me being a lowly teacher with ideas above my station/me being a teacher who is way far removed from the class on account of my huge mortgage and no longer drinking hard drink or smoking fags or hating football or liking Strictly Come Dancing or not having read and written 10,000 word analysis of all Lenin's works including his Primary School essay entitled, "My Teddy Bear is my Equal," is that Brand has been more or less saying these kinds of things for years. As for being a hero- I really have no time for "heroes." It was Tommy Sheridan's constructed and self promoted hero status that kept me away from the SSP and I only decided to join in 2003 when I met Rosie before her being elected to the Scottish Parliament- who was down to earth and kindness looks out of her.

Brand says he is no "leader" or hero- but he is in a position now where the things he has been saying for years are being heard. Look on Youtube for his stuff he did on regional TV and on his blog- anti-facism and anti-capitalism going back years.

I think more than anything, it says more about our rich Private school educated media and political system that in the rare situation that a working class person gets near the political media it is as an entertainer, and he is lambasted from all sides, rich, poor, fascist, anarchist and marxist.

We are in the same situation today- almost the same inequality of working class representation in the higher echelons of this pretence of a meritocracy, in which Harry Pollitt and other union/working class "leaders" of the early- last quarter of the 20th century found themselves when they thought that the only way to truly make a difference (or one of the ways) for the class was to send their children into the Oxbridge lions den. As Brand has said, the rich feel at home in the corridors of power, when we, the working class are not only there as reverent visitors, but on the rare occasion of working our way in there to try to make a difference, are made to feel very uncomfortable by those who "belong there." Our discomfort is accentuated by the surroundings AND by those who we try to represent, who can be easily whipped into critical hysteria by the millionaire owned and run media- including the very heirarchical and Oxbridge controlled BBC. "He can't be like us because he has sat his arse on an old oak bench and was educated/He is not like one as he was brought up in one of those houses we give to the cogs in our profit pyramid scheme."

I am not a fan of Brand's comedy, and certainly not his misogyny, but I am glad that what he has said is getting such publicity. Brand is inconvenient to them now- he fucked off out of their clutches and by sheer brass necked talent, he has become an international celebrity- giving the boy from poverty a voice they cant control.

I do feel the same "knock him down" syndrome is in use against Owen Jones, who again isn't quite revolutionary enough for the loud, fists in the air, catechismal students of how a revolutionary should be; what HE should wear and HIS level of poverty isnt quite what they have read as being correct to be their saviour.

Who is perfect? Certainly I am not. And I will never be in the position of Brand or Jones or Michael Rosen to spout my less than 'dead revolutionary' perfect opinion, but what with working class politics, working class needs and equality being completely shafted at present- our working class organisations wrecked by rabid toryism and sectarianism encouraged by those within with axes to grind and perhaps a class to help keep in power- I am glad of the odd Brand or Jones or Rosen or Zephaniah just to remind these Etonian, exploitative, greedy, monarch ring kissing, power usurping bastards that their time using our resources and wielding oppressive power is limited. 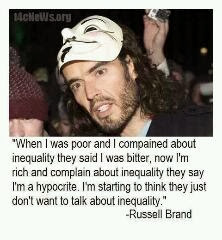