Thinking of those in our family effected by war. Alexander Mulligan, who died a very young man in WW1 and our Great Grandad, his brother Thomas, who came back from that war so traumatised he wanted to kill the local factory owner for "encouraging" so many to their deaths. He also died a young man- a victim of war, with undiagnosed trauma that led him to drinking himself to death- and had such mental scars, ensured our grandfather never lifted a gun.

The War effected my Grandfather's family- our family- for many years afterwards. One of the most poignant things we as a family have is a gift of an engraved match box a German POW he looked after made him in a POW camp he was a guard in, after he was moved from the front. This proves to me he was a good man who saw the lunacy of poor people being sent to foreign fields to kill other poor people. He befriended "the enemy," another poorman, no doubt, sent to war by aristocrats who were rowing over markets and stolen resources.

On the other side of my family, I am remembering James Scott, who left 5 children.  And my granny Scott's wee brother, her only brother, Dorrie.

I think it is extremely important to remember our family. I really hope remembering will help us move towards a world in which there is no wars. The idiocy of armed conflict is something that has effected me and the country I grew up in deeply- I witnessed as a child the impact of diametrically opposed ideologies wasting lives and talking about brothers, sisters, children, mothers, fathers and loved ones as "collatoral damage."

The scars of war run very deep. And for many years they effect societies abused by those killing for gain (or sending others to die for gain).

I hope the rest of this century is a century of healing for our young people... But it hasn't started off very promising. I really feel if our remembering is not tempered by a fight for peace, then these wonderful, beautiful, valuable people died in vain.

I wear a white poppy as a supporter of non-violent activism and as someone opposed to armed conflict.

I have a friend- 90 year old Ron who was stationed in India in WW2, who is an inspiration and has fought for peace all of his life. He lost many friends and his family fought hard for peace at a great cost to their lives. I assure him I will always strive to fight for peace as long as I am fit. 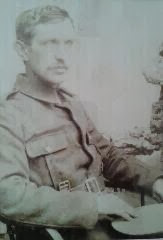