Hang the DJ... We're on the eve of destruction.

Driving to our out of town warehouse of slave made clothing and consumer goods, I was listening to Steve Wright this afternoon and a song came on I hadn't heard for ages. The impact of listening to the lyrics of this song was like an electric jolt – a toaster thrown into a Radox bath. A punch from a dainty handful of impressionist painted daisies. The sudden change over, as we had drove along listening to the oppressive, blandness and hegemonic unquestioning Jeremy Vine, as if I had lived in Flatlander Music-ville and had been flipped high in the sky to survey the guts and workings of the music that had preceded it (and came after); played and talked over by the notorious interrupting DJ who Morrissey once wanted hung. When the song finished, even Wright went, "Wow!"


The eastern world it is explodin',Violence flarin',
bullets loadin',
You're old enough to kill but not for votin',
You don't believe in war,
but what's that gun you're totin',
And even the Jordan river has bodies floatin' 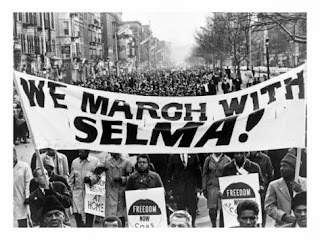 Why this reaction to a song that has been doing the rounds since 1965?

Because it sang of where we are now. It sang of the murderous wars we are applauding  by shopping in Primark, Gap and Marks and Spencers. The cost of our oil and cheap veg from Lidl. The cost of voting for best of bad. The cost of our long working hours and repeating the ‘skivers and strivers,’ ‘undeserving poor and immigrants’ terms the Tories, Libdems and UKIP are shouting, kicking, punching, bloodying us in the gutter until we believe. It sang of our media, lying, conniving, driving us to hate our neighbour and our slaves at home and abroad. 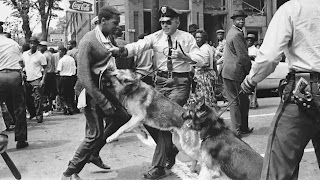 The song had, for a long time, been on a BBC restricted list. Those of you who like me, remember the puritan "banning" of Relax and even the Pistols "God Save the Queen," probably don't know about the restriction of Barry McGuire's recording, because it was a restriction THAT MATTERED. A song and a message that almost disappeared from the playlists just like the MC5. A kick at our consciousness – a nailing of the right wing scum who judge and casually blame the foreigner and then sit down and pray over their gravied and hidden slaughter housed dinners. Lyrics and delivery that meant something; that made listeners sit up and survey the bullshit pumped into their ken, their "understanding," by the BBC, the Daily Mail and the Murdoch’s and all of the other murky profiteering liars of the past 50 years- for indeed these lyrics, spat and sneered through tinny transistor speakers are a year older than me. The next anniversary of such pop subversion even pirate Radio Scotland banned it, is its half century. 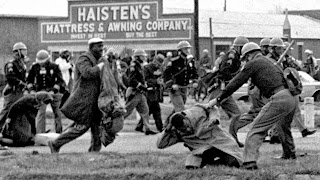 Even "the blessed DJ" gasped because for once, the music he played this time SAID SOMETHING ABOUT HIS - MY- OUR- THEIR - LIVES as we sit and are blown away by their drones and juggernauts and their tanks roll over us with every increase in their murderous profit taking heating bills, bedroom taxes and "peace making" oil thieving corporate incursions.

Hang the DJ. Or wait- perhaps that "Wow!" was the realisation his Cowell fawning, "lets be rebellious by giving proto fascist Farage airtime," propaganda propagating blandness was his ‘Washing of his hands of the conflict between the powerful and the powerless - siding with the powerful,’ as Friere would say to him 'YOU ARE NOT NEUTRAL!". His grinning, hand wringing inanity is enslaving, engulfing us all. 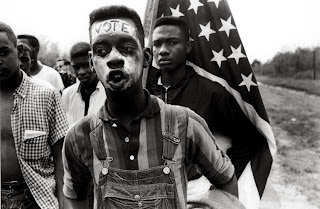 Will he go home tonight and listen over and over again and question his neutrality in allowing greedy bastards like Farage and Cameron the air time to promote the destructive, historically one sided view of the cancerous Thatcherism they wank over? Probably not.

But he did say “Wow.” He did for a brief second have his conscience pricked. For a moment he did see through the murk of processed news and “art.” The tranquillity smashed by the Prisoner “Number Six.” It’s all in here –the Middle East; young people fighting and dying in wars they don’t understand; the evils of unquestioning, imperialistic nationalism; race riots; hypocrisy; nuclear war; the space race; conservative bullshit. 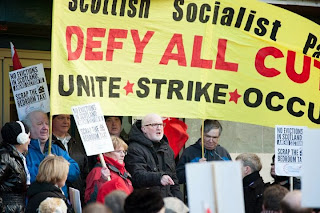 Don't you understand what I'm tryin' to say
Can't you feel the fears I'm feelin' today?
If the button is pushed, there's no runnin' away
There'll be no one to save, with the world in a grave
[Take a look around ya boy, it's bound to scare ya boy]

And you tell me
Over and over and over again, my friend
Ah, you don't believe
We're on the eve
of destruction. 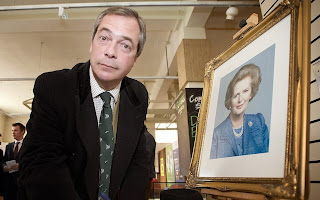 And then the “Rover” recaptured us as Steve Wright interviewed Nigel Farage about his love of beer, his hobbies and his, oh, casual racism, proto-fascist, anti-working class 'ordinary bloke' views.

He kissed and charmed him, fawned and never mentioned his marching through a village with fascist friends singing Hitler Youth songs, or his racist bullying of peers or his professed love of Enoch Powell, his fleecing of tax payers by claiming £2m in expenses; or his wanting to rid the working class of their rights to freedom of association and the human right to freedom from inhuman or degrading treatment. His racist, cynical dressing up of attacks on those struggling to feed their families as “protecting our freedom” from Abu Hamza (who the European Court of Human Rights wanted to protect from torture – and wanted to protect others from torture in order for undemocratic Jordan to gain his conviction) and other foreigners that must be like him. Hang them all.  Or at least deport them and let other fascists do it for us. 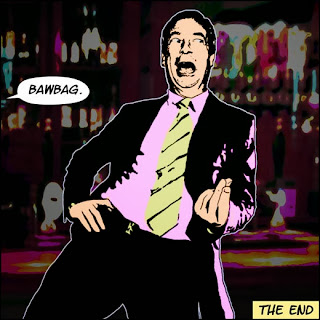 It kind of seems that if Goebbels himself was sitting opposite him in the studio, he would give him a fair crack at telling us how he loves playing with his kids and dogs. Farage was an all round good geezer. A non-PC real ale supping bloke who mixes with Postmen and Barristers alike “down the pub.”

The “Wow!” had accounted for nothing. A momentary id over ego. Smashed. The Human Right of this millionaire man to spout hate and his warped view of history obviously subsumes that of workers to fight for their humanity and integrity in their place of work.

“Think of all the hate there is in Red China
Then take a look around to Selma, Alabama
You may leave here for 4 days in space
But when you return, it's the same old place
The poundin' of the drums, the pride and disgrace
You can bury your dead, but don't leave a trace
Hate your next-door neighbor, but don't forget to say grace
And, tell me over and over and over and over again, my friend.”

Hang the blessed DJ
Because the music they constantly play

On the Leeds side-streets that you slip down
Provincial towns you jog 'round.