The Velvet Underground blew this small town Ulster boy's brain wide apart back in the mid-eighties. I "discovered" them thanks to the alternatives friend, John Peel, the NME or Sounds magazine.

A commercial, mass produced shiny pop scene was gilded by their short existence. Reed, Warhol, Nico, Reed, Cale, Morrison, MacLise,  Tucker, Yule, Powers and Alexander battered the fuck out of pop norms, beats, melody and instrumentation and propped it up at the bar after a sizeable spliff and an intraveneous hit. And the best eighties music was indebted to them.

It said something about their genius when back then, during my teenaged anxty days, they were streets ahead of anything around. Even the greats of the eighties - The Bunnymen, JMC, The Smiths - didnt hold a candle. But they - and others like the Associates, the Glasgow music scene and the Man/Madchester scene- would not have been anything like they were without Lou and the Velvet's magic.

I remember turning up at a friends barbeque in Newcastle,  County Down on a really hot, sunny day dressed in my black, alternative, scruffy weird self cut hair, smiling amongst pastel dressed Miami Vice "strivers" on an Irish dunescape.

My car blasted out "Guess I'm Falling in Love," "Heroin" "Sunday Morning," and "The Gift." The guys exiting my car cracked open the beer, the girls were goggled up and down by the WASP, good living, sell their granny, white teethed, money marryers and I felt awkward amongst the Christian educated.

My friend, who had invited me was standing frying an animal alongside an upstanding, strong, countryboy of Ulster. He erupted in laughter as I approached.

I remember on that hot, sunny afternoon, feeling so far away from those we had joined up with. I felt -I knew- we were being judged. I felt then that I needed to get away, my head full of Nico and Hunter S. Thompson.

I looked at my carload of "outrageousness," and felt proud not to be thought of as belonging to the deck shod and cotton jacket, "normals."

But I felt pissed off I couldn't drink because I was the only driver, so I cranked the Velvets up, lay down beside the Strada and closed my eyes and drifted off...

Guess I'm Falling in Love- a song that beat with my teenaged hormones through my body  - is here. 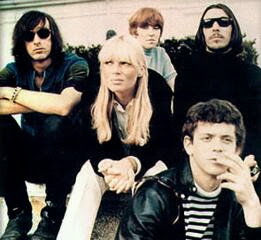