We drank our tins of Satzenbrau shivering on the school roof looking across the streetlit mid-Ulster valley that was my hometown of Banbridge.  Another Friday night without a care.

Out of the six of us, I was the only one working. The others were all still in High School. We all loved the new found freedom of youth, drink and music- and some weekends, before we hit whatever pub we wanted to go to that week- or whatever youth club or nightclub, we listened to music from a mono battery powered tape-recorder and debated the merits of the synthesizer and its impact on guitar music. 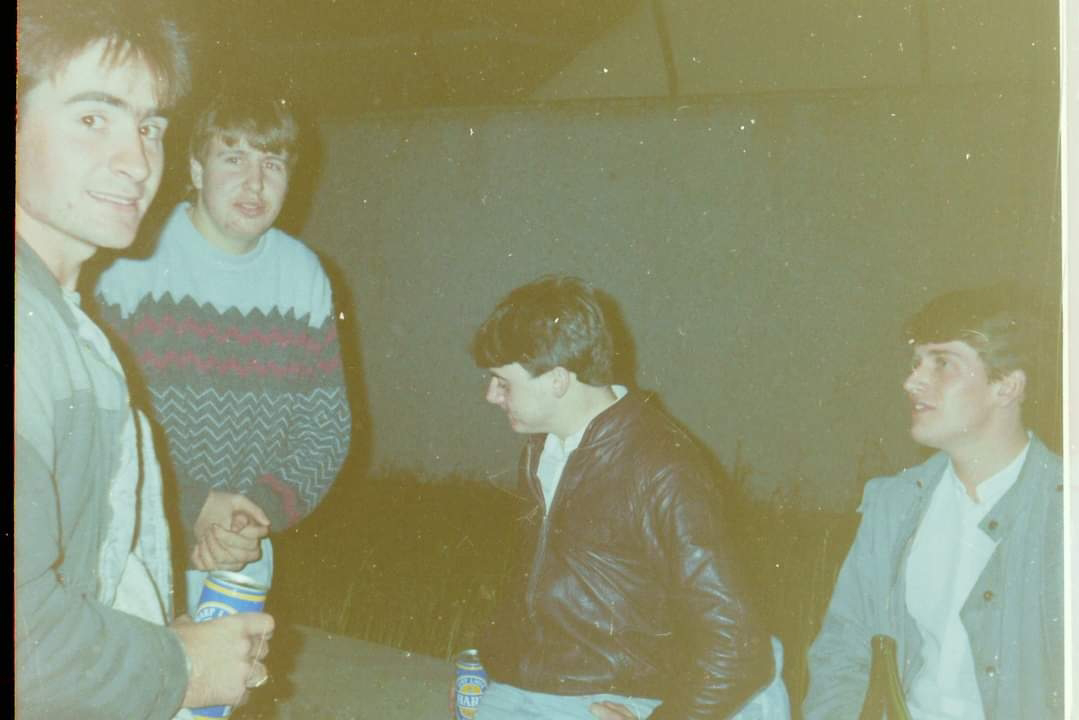 Alex had eclectic taste- BA Robertson, Rod Stewart and chart stuff. Colin was into Jim Steinman in a big way. I was into my post-punk stuff, Joy Division, New Order, Echo and the Bunnymen, Cabaret Voltaire... The Mod was into the Jam, The Kinks, The Who and the likes and Roger and Jackie, the only girl with us that night, were into Punk. We took turns with tracks, but it was The Mod's stereo. The Jam blared through the cool night air. The noises of the town wafted up to us, inviting us to join the laughter coming from the streets where the Rollerdrome, smoke filled and full of the confused noises of disco and Donkey Kong, Space Firebird and Defender vied for our attention with The First and Last, Campbells, The Coach, the "big church" youth club, Gowdy's or just hanging about on the streets "gaunching" with people... asking about unseen pals; gaping,  stuttering at girls; feeling inadequate as Lutton took to the dancefloor and never stuttered once. Or playing snooker.

My favourite part of the night was the carryout. A few cans of beer and a bit of craic, usually freezing in a hedge, at the side of a gable wall or a school grounds.

The music was my freedom. It promised much. A world before us. A world we would change. The Mod dressed in his mod clothes, "target" on his back. Roger in jeans and grey denim jacket. Colin in a burgundy bomber, Alex in a fleecy, furry tartan jacket, me in black baggies, boxer boots, a flaming cross teeshirt and long trenchcoat- fashion victim extraordinaire- and Jackie in her forbidden makeup, pvc trousers and punk top she stashed in a bag in a friends house so her ma and da wouldn't see.

We were ready for a new world- or at least a few more beers, a chip and gravy from the chinese and another box of fags.

Then it was Roger's turn to play his tape.

The music didn't thrash out in the way his choice usually did. It wasn't California Uber Alles or Pretty Vacant. The guitar sounded almost like a sitar. The opening vocals  almost whispered.

"It was nothing like that in my day, not here in my town
We didn't get things all our way till we were full-grown
Now they go into pubs and you're gonna get mugged in my town..."

We stopped speaking over the music.

Loud shouts about the shite of  our wee world. This world we knew. One that visited this valley from the outside now and again. Driven in deliveries of mayhem that couldn't and didn't differentiate between catholic and protestant children, women and men. A world in which music had been a "legitimate target" when after playing our local big venue, the next big thing, The Miami were blown to bits and shot to death.

This was music that told the truth about murderous "sides."

At the time through my rejection of the local version of rebellion- hard rock; meaningless Billy Idol lookalikes and Doctor Martens that did nothing to Kick Over the Statues, but instead marched to them to salute, I rejected punk.

Outwardly. To suit my image.

My "post punk" *self* image, because no-one here really gave a shit about how I looked nor did they care for the hopelessness of Joy Division or the inaccessibility of the lyrics of The Bunnymen.

Secretly, though, SLF touched me through the nonsense of being told, about my best friend, "but do you know Mickey's a catholic?" And through the fear of the threatening phone calls my joiner dad got from paramilitaries for doing his job in their territory, SLF comforted me that others thought "sides" where nonsense.

Mickey's mum's Sacred Heart pictures on the wall were no reason to hate. And my rejection of religion didn't make me a protestant for others to hate.

"So you read about it every day, in the headlines
How they take and take and drive away, sex and late nights
And it's gotta be wrong, because they're so young..."

My childhood was happy. A mother and father who worked hard to give us Blackpool once a year and a great Christmas. A childhood my society tried to steal. The big men who forced my father to hand over the few quid "protection money" from the corporation he worked for. A low paid worker forced to be the middleman between the multi-million pound rehousing project in Belfast and the Shankill Butchers.

After the cartoons, I watched Gloria Hunnyford tell me why my da' might be late... "incidents" in Belfast, Lisburn or the Maze.

Our family were not outwardly "kissy," but we loved each other. Our livingroom curtains could conceal me as I stood behind them looking down the road, waiting.  And on seeing the yellow Farrans van drive down the road my heart would leap, but I would control my relief and shout into the kitchen where my mum kept the dinner warm, "he's home!"

"This is class, Roger." Jackie loved it, so we loved it.

I wished we drank slower. But out of booze it was time to hit the town and to try to make the fiver stretch to a few more beers and a chinese.

"Where do yiz fancy going?"

We climbed down from our sniper nest and walked down the leafy lane to the main Newry Road. A road that took everyone from this end of town to work in Belfast, Newry, the Shoe Factory or the town.  I looked up the hill towards the factory where I would end up working in a few years time- a place in which there were sectarian quotas which were met through predominantly catholic offices and predominantly protestant offices; catholic run lasting lines and protestant run sewing machines. All controlled by English General managers sent to oversee us.

Roger and Jackie walked on. Jackie oblivious of the fact she had legitimised this meeting of nerds by her presence. Roger, Embassy Regal hanging from his mouth, and Jackie disapeared to somewhere cooler than The First and Last.

We walked passed the nursery school where I had been painting Humpty Dumpty's for the wee ones on the windows when the bomb went off; passed the empty shell that was once Stevey Shepherd's motorbike shop, across the bridge under which the controlled explosions were executed; past the shop the eleven year old boy died of shrapnel wounds and through the side door into the lounge.

A "catholic bar" where both religions relaxed, played "Crazy Climber" and snooker, and we were never questioned about our age. A few more pints into a world of gaunching with our mates.

" Broken cities 'n' broken hearts, bits of people who fall apart
In my town
It's always bits of kids today
Bits of kids, we're always, here in my town."

Stiff Little Fingers are a band I have loved since. A band under valued. A band who, along with their rivals The Undertones and the others from the Good Vibrations camp and along with The Miami and The Shankill Butchers, bomb sales, parades and catholic and protestant quotas, shaped me.

Another track of my years HERE