One thing I have learnt over the years I have been marching, shouting, protesting; pushing for change, is not to trust the police and media estimates at demos and rallies. Though not all of the time. And there are ways to get to the truth. The odd estimates by the press and police for the number of people at the huge demonstrations in Edinburgh for Scottish Independence last year and yesterday did nothing for trust of the Police nor our "national broadcaster."

My photo essay is here - these words describe some of what I snapped.by 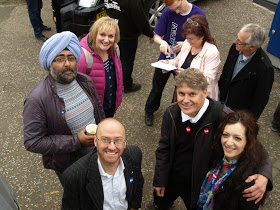 Bizarre figures of 8000 plus or minus a few hundred by the BBC (who were very obvious by their absence in the press pit on Calton Hill) and by the Scottish Police will only serve to add to distrust of these organisations in the emerging Independent Scotland next September.  The tens of thousands of ordinary people who traveled to Edinburgh by bus, train, car, bike or hoof yesterday are quite aware of how big that crowd was. And it wasn't a decent crowd at a Clydebank vs the Buddies match. That crowd that snaked along The Royal Mile to Calton Hill was a crowd that would have made a double bill of the Manic Street Preachers and The Boss very happy.
I have ways I gauge the size of a crowd. These methods are not very scientific, but based on experience and on "intelligence gathering."
Setting off from Bearsden yesterday was an unusual experience for a seasoned protester  When my wife and I settled on the train, we noticed people who were obviously dressed for a day of shouting Yes to power. Badges, banners, teeshirts and kilts marked out those who want a better life for their children and future generations. As someone who has made that journey to demonstrate against ridiculous, vicious and bullying Westminster policy like bedroom tax, Trident, war and austerity for years and NEVER have sat with so many "comrades" setting out from the usually politically quiet Bearsden before. By the time we arrived in Queen Street, we had spoken to a Labour for Independence person, a few SNP'ers and a woman who wasn't going to the demo, but on hearing we were SSP members, asked for material to read and to give to her fiance. 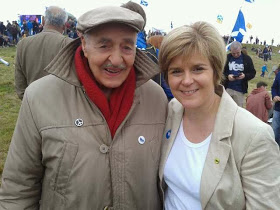 Queen Street station was pretty impressive. SSP, Women for Independence, SNP, Bravehearts, politicians, Labour for Independence, Radical Independence, conspiratorial whispering SWP's and lot's of families, children, pensioners and workers smiling, hopeful and positive.  So even at this early stage I knew what was happening was really big. Not since the days of socialists in the Parliament had I saw so many hopeful, positive Glasgow crowds pack on to Edinburgh trains. 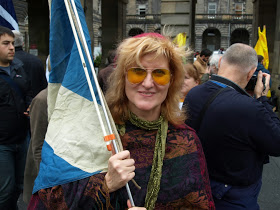 The scene that greeted us in Scotland's centre of political power was incredible. Tourists videoed and photographed the huge crowds as they gathered and the buskers and street performers joined in and pinned Yes badges and flags to their attire and instruments and props. For a few hours yesterday, Edinburgh was politically the centre of a dynamic, new, confident nation. A nation of people looking out for each other and a nation that with speaker after speaker on stage calling for "a better nation" where prosperity was measured by the inclusion of all- the betterment of all -the will to stand shoulder to shoulder as sisters and brothers.
As the  crowd, late because of its unprecedented size, snaked down High Street, I spoke to Police Officers, some of whom officiously wouldn't give a view, but some willing to in politically veiled language give the thumbs up to what was developing in Edinburgh and across Scotland- ie, the slowly emerging revolution overturning Etonian and Aristocratic hegemony that has been led by Westminster and led to desperate poverty and dreadful inequality in this kindest of nation. Some were willing to reveal how they were briefed.
I always recall a lefty friend of mine, who as a teenager was an economic British Army conscript. He told me how in the eighties, his battalion of Engineers were drafted in to 'protect' Greenham Common from anti-war, anti-nuke protesters.  As he helped shove the protesters back over the wire fence they had demolished and as he was punched, kicked and spat at he shouted, "I agree with you!" And it was there his realization of just what the power of the economically strong investors in Nukes, arms and oil really was. Yesterday, the Scottish Police were briefed they were corralling between 10-15k people- but officer after officer told me the figures had been an underestimate.   How many young officers unable yesterday, professionally, to give me a point of view on the referendum have realized today, with the official figures, just how powerful and lying the Westminster Etonian share holders are? How many of those extra  officers who were drafted in late in the day to close roads during the crowd dispersal have thought, "this is power - this is manipulation- this voice that has spoke does not represent what I witnessed."

How many if those officers will now vote against those lies? How many will now vote yes because their professionalism has been undermined by a Tory/Libdem/New Labour diktat to their commanders?
The best part of being part of an emerging, new, free, democratic, pro-equality nation is the fact that our "stars" and top politicians do not care for top tables. Artists, new Scots, writers, First Minister, classroom assistants, call centre workers, Post men and women, Deputy First Minister, disabled and able bodied,  retired workers, MSP's, MP's mingled, discussed, laughed, shook hands, shared sweets, chased children and patted dogs. An emerging nation that say Yes to equality and fairness and no to the present reality so eloquently laid out by Alan Bissett from the stage.
The SWP, late comers to the Independence cause, though through their memory hole style of politics have 'always fought for Scottish self determination' did their usual evangelist, sniping at the majority of the rest of the crowd and inserted themselves right in the middle of the Radical Independence crowd, shouting rival slogans and trying to outsell each other's wee handful of their recent edition of their specially covered London produced Socialist Worker and spouting that all 30 or so of them knew the true path of Trotsky/Leninist Marxism and all other versions were Murdoch/MI5 plots.

They were a welcome sideshow.

The legitimacy and urgency and fairness and socialist argument needs even them. Other micro-socialist cults sneered and shoved and growled at each other and they gurned when socialist and social democrat, one after each other; confidently led us to a Scotland the SWiPs still cannot grasp- one in which we walk together, listening to each other; supporting each other and acknowledging difference but holding our principles beside those yet to realize that the argument is not about flags, Marxist micro-interpretation, Bravehearts or kilts. 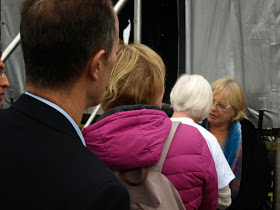 Colin was impressive.  Colin summed up in a few words the thoughts of many in that crowd.  Colin's speech is HERE

"I'm over beside the socialists!"

"That's not helpful; there are socialists EVERYWHERE!"

Socialists everywhere.
Behind the scenes, Elaine C Smith put her shoulder to the grindstone levers, manipulated the programme to ensure all were represented and the singers, writers and comedians tempered the serious, inspirational messages that the politicians urged us to believe.  And I was proud of Colin Fox, Carolyn Leckie, Allan Grogan, Elaine C,  Hardeep, Tasmina and Patrick. I was moved by Eddi Reader and her uncles flag. My emotions went from anger to sadness to hope with Alan B's poetic comedy of errors. A comedy of dreadful,greedy, cap doffing errors that will end next September.
The crowd, that cheering, smiling, hopeful air punching, teeming mass of understated sister and brotherhood were much bigger than the 7000 CND march in Glasgow earlier in the year. That rally nearly half filled George Square. It was bigger than the 7500 who didn't quarter fill Calton Hill back in 2005 when socialists and republicans snubbed the Royals in the new Parliament and signed the Declaration of  Calton Hill - when my wee boy sat atop my shoulders watching Rosie Kane, Alisdair Gray and Colin Fox light the fire that led us to Calton Hill 2013.

The crowd was bigger than the 20000 I sang, punched the air and danced with in Wembley arena at an eighties New Order gig.

It was smaller than the 100000 who walked to the SECC to listen to Jimmy Reid and others berate the Westminster New Labourites for declaring war on Iraq.

It was smaller than the 80000 I sang along to 'Sunday, Bloody Sunday' with in 1985' s Croke Park U2 Gig.
Ron is an inspirational man. Part of that crowd and 90 years young this year, he has been a life long socialist who puts many's a young comrade to shame in his activity and his actual LIVING what he fights for. A man whose father and grandfather dedicated their lives to equality and peace and of whom Ron said, "I saw no point in rebelling against their communist kindness and principle and belief in social justice. I gladly lived with the principles I grew up amongst."  A man of amazing principle and kindness- and a man who socialists and others in the world are indebted to. He and his generation fought for and brought us the NHS, freedom from Nazis and strides forward in the real fight for equality. It is an honour to know such a man.

And Nicola Sturgeon, the Deputy First Minister said of, "it is a privilege to stand with Ron."
I watched as Debs painted flowers and saltires in fresh, clever, loved and hopeful children's faces.
I watched Margo Macdonald, a woman with huge strength and who is respected across the political spectrum, greet stage hands and politicians and young people as equals. I watched bus loads and bus loads of people from across the country sing as they passed Citizen Alan Smart sing about the dreadful Bedroom tax; pandas declare for independence and  tourists clap and cheer and join our ranks.
I know crowds. And this one defied BBC, Westminster and Murdoch figures and nuclear, oil and bullet share prices.
This was 25000 or more hopeful, kind, hearts walking on behalf of a nation who want a better world.
Posted by Neil at 06:19