Just announced by the Tory Minister for Culture: The commemoration of the butchery of WW1 cynically starts in Glasgow Cathedral on August 4th next year during the run up to the Independence Referendum in Scotland.

Am I being cynical in thinking Glasgow would not be hosting this if the referendum was not happening a month later?

I am totally disgusted at how WW1 is being twisted into some sort of "proud historical British moment."  It blew my family-and millions of others- apart.  The harm is still felt through the decades- alcoholism, abuse and poverty were the legacy of this dreadful industrial scale murder of generations of men from across Europe and beyond- and all of those impacted on my family.  WW1 was one of the most dreadful, murderous periods of the invasive, resource grabbing, imperialist British project, yet those at the top of our class system; the Eton mess in Downing Street; the post-Thatcherite upperclass counter revolutionaries who aim to have us all doffing our caps for unstable employment and food bank handouts, want us to remember how our forefathers sacrificed themselves unselfishly for the red white and blue profits of the jute, linen, steel and shipyard lords. They want us to celebrate around the pulpits of the churches of the vestment covered men who sacrificed their flocks to fight for "God and Country."

Would anyone like to join me in a demonstration for,

Stop the Wars and remember why people die in conflict. Rarely for freedom and most likely for rich mens land and resource grabs and  stocks and shares. 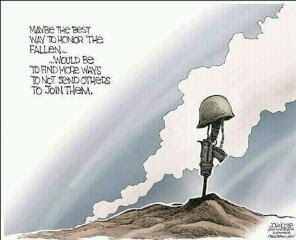