Hate to publicise the Daily Mail... But this man sold out students and the NHS and those on welfare, as did Jo Swinson, so have few qualms in posting this story.

Swinson,my local MP has allowed her principles to be sold for a taste of power. I told her so the day they announced the coalition with the tories. She is in over her middle class ambitious head with these privately educated millionaires methinks. 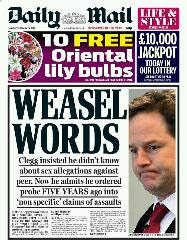 Does anyone know stats for how many animals die each day to stack our supermarkets, feed our fast food habit and grace our plates?

It must be a serious amount of calf, lambs, chicks, foals, piglets and fry born each day to be filleted, preserved, smoked, skinned, gutted, marinated, tenderised and stuffed to fill all of the supermarkets, markets, shops, cafes, shoe shops, clothes shops, furniture shops, bag shops and restaurants in the world. Every aisle of trolley upon trolley filled with burgers and kievs and lasagne and soup.

The animal death industry must have huge power in our world. And the money used to sanitise and advertise this mass slaughter industry must be immense.

What power the systematic birthing, rearing and throat sliting industry has to produce such a massive amount of flesh and profit for flesh eaters. What massive amounts of money the powerful must have from the meat of the weak. The exploitation of the weak and vulnerable and selling of their branded flesh, churned and diced and minced into meat. Passed around and licked and skinned and wore and masticated.

We are an animal loving nation. How cute they are. How we love to stroke them and ensure they are comfortable and looked after and tender and seasoned and fried.

How we love the spring when they gambol and bounce and wag tails while drinking their mothers milk and stun them and slit their throats and roast them with rosemary and garlic.

They are yummy cute. Cute, vulnerable and delicious. Lovely to stroke, chew and zip. 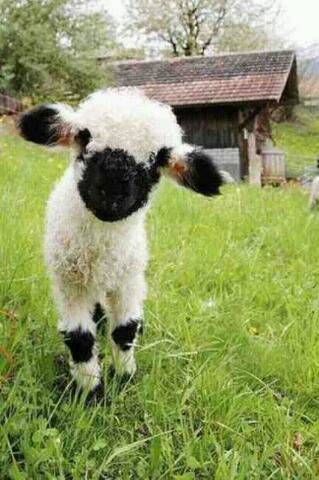 That would be a cut too far...

Thanks BBC News 24. After hearing that 1 in 4 children in the UK is living in poverty BEFORE the dreadful cuts and slashes of children and family essentials come black April, I had been worried about whether or not the Red Arrows were going to continue their whizzy smoking flying about the place thing.

David Cameron has alayed my fears that he might be cutting all the wrong things, with his assurance those wee red planes will still be joukin' and divin' all o'er the sky.

At least the homeless will have some speedy fast sky things to look at from their pitch outside Starbucks and Top Shop.

Thank God for the Tories and Liberal Democrats, because they are looking after us and our we'ans.

Meeja. Kate is not news. Mantel is absolutely right. The Royals and Tories and media have created her to distract us from the very real stuff that is being meted out by the hegemony on the unemployed poor/working poor and workers on average wage bands.

She is a distraction amongst distractions the ruling class are filling our print and broadcast meda with, knocking off the agenda the killing of the NHS, the bedroom tax and the draining of budgets for children and pensioners by this dreadfull government of millionare Tories and Liberal Democrats.

The Coalition of Resistance is calling a People's Assembly.  It is clear the country has had enough of the far right Tory and Liberal Democrat coalition and their attacks on working people, poor and vulnerable and their protecting and cushioning of those who wrecked the UK economy.

These millionaires and billionaires who control our Government at the moment do-not speak for me nor as voting patterns show, do they speak for Scotland.  I support the call for a united resistance by the Coalition of Resistance (a funny, but informative blog about the call for a People's Assembly by Mark Steel can be found HERE).

Ordinary people across the country will attend this People's Assembly.  I propose East Dunbartonshire people who are not only fed up with Westminster right wing policy makers attacking Scottish citizens who never voted for it, but also people who have been diversely affected by these greedy, unrepresentative people should meet and plan resistance here.

I propose a campaign that will lobby our local Liberal Democrat MP (and Westminster Cabinet member), MSP's who support the Westminster Government and Councillors who will not propose alternative defiance budgets.  I propose we lobby the Yes campaign and the Better Together campaign and as, in their vision of a post 2014 Scotland, how they are going to protect us from policy Scotland has never voted for? 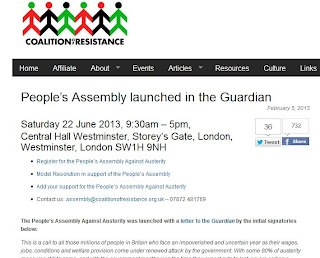 I've just scanned the telly channels. I'm off work on today and can't believe the amount of telly in the morning is made up of propaganda directed at those who are at home at this time. It is clever tory stuff. Hats off to them for using their creativity, money and power in a way that not only keeps their classes interests to the fore, but pushes them ahead in the class war they are waging.

Millionaire Chancellor George Osborne has talked about the shirkers with the "curtains drawn," still in bed. He says the strivers are working or at least filling every minute of every day filling in application forms and using their food money to phone prospective employers, who, of course, have got hundreds of vacancies waiting for those who get on their bicycle and go looking.

The Tory PR machine is in overdrive. A TV programme "Saints and Scroungers" pumped out by the BBC at this time in the morning - a time when if course scroungers won't see it as they will be fast asleep cuddling their White Lightening bottle, shows us deserving and undeserving poor.

The stereotypes accerbated by the tabloid press. I know, because I hear the editorial and the examples made by Jeremy Kyle and the other propaganda programmes quoted at me by stay at home mums and retired family members. Not one of those who quote these things at me know a real life example.

And guess what? The myth the BBC, ITV, Sky etc are pumping out of the huge swathe of broken Britains- lazy and scrounging drainers of state money- flamboyant druggie drunk wasters of your hard earned taxes- are just that... A myth.

Research - lots of it carried out here in Scotland- has shown what we all really know to be the case, yet because of the obfuscations of our City of London friendly media, find hard to escape the propaganda myth.

There are not enough jobs for everyone, nor has there been for many, many years.

Even during the so called Blair and Thatcher "boom" times the boom was only for those profiting out of the creation of economic bubbles- the working class had their jobs taken from them and replaced by fewer low paid, unprotected jobs.

The person across the road may well be giving in to hopelessness as the thirtieth application form this month is dropped into the post box. The young mother may well need benefits to boost her low paid unstable job. The person suffering from isolation, depression and victimisation by our middle class, City of London based, curtain twitching media may well take time out of the drudge, grey rejections with the legal, cheap bottle of chemically brewed cider.

But one thing you can definately be sure of. The miniscule - and it is indeed miniscule- amount of benefit fraud will be highlighted as what is breaking Britain, while the hundreds of billions of pounds of tax avoidance and fraud by the rich; the continuing robbery of our tax money by the banks and their Tory pushers and the selling off of our services to companies determined to make more billions out of the creation of yet another capitalist bubble that will inevitably burst and impoverish the working and poor, will never have a morning TV programme made with a mockney, faux working class voice doorstepping their gilt, lacquered Kensington fifth home.

So why don't you switch of your television set and go and do something less boring instead? Like lobby your local Libdem and Tory Constituency office and let them know you are not fooled by the culture of blame and their dressing up of plain theivery as "essential austerity measures." Ask them how many jobs have been created since they came into power? Ask them why the debt has nearly doubled since they took it on with their poor baiting poverty creating policies? Ask them why food banks are growing and growing? Ask them how many people have been made homeless and how many more will be made homeless by their bedroom tax and why people with second third and forth homes are not targetted with this tax- why only the poor?

"Blow up the TV
Blow up the car
Without these things
You don't know where you are
Sell all the magazines
Pull down the abattoirs
And all that's obscene."
Toyah Wilcox, I Want to be Free. 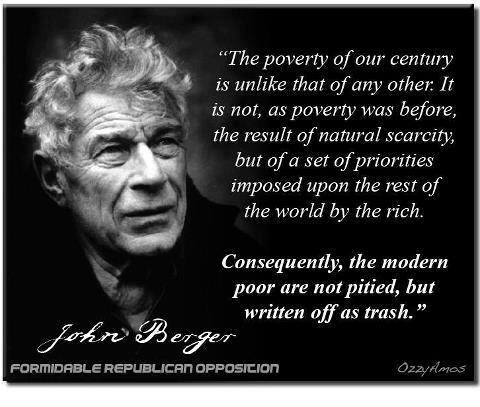 One reason why an Independent Scotland is worth fighting for...

By (me) Neil Scott, East Dunbartonshire.

How do I explain my want for an independent Scotland? Ok. Lets do that using one example. Excess.

It's clear I am a socialist, so surplus in my independent Scotland would be used to ensure those with little access to something they need, get it. Excess or surplus or profit would not bolster the bank accounts of those who have so much they will never use it.

In Scotland, over 2000 people MORE die in the four winter months than they do in the previous four and the following four. A lot of those deaths are because of hypothermia in the home. This is in a country in which we have an excess of oil and an excess of electricity produced. This surplus is not given to our pensioners and poor to ensure they live through these harsh Scottish months. Both are sold in London or through a majority of London based companies for the profit boosting of the top six power companies who make more than £30 billion a year to cushion billionaires from the harsh winters on their yachts in the Carribean or at the most local, their well heated second, third or forth homes they keep in Scotland for the Grouse shoot or a wee visit at Hogmanay.

£30 billion a year that is mostly generated in Scotland through our excess of power. And this figure does not factor in the oil drained from our shores to bolster those bank accounts of the millionaires and billionaires who can afford to invest in the oil companies. Money they will in all probability never spend, while the lives of the poor and old are sacrificed.

Fighting this greed and fighting to share out our plentiful resources to ensure people have better, longer and more productive lives has not happened with Scotland in the UK. The UK is not OK for Scotand'd vulnerable.

Scotland has voted continuously and decisively for a more socially just system since the days of Thatcher and before. But what have we had? Our budgets and welfare controlled by the Tories, Liberal Democrats and New Labour- all who have deep relationships with the power and oil profiteers. None of the above really want to ensure our pensioners and vulnerable are safe and warm. In fact all of the above support welfare cuts and bleeding more money from the most vulnerable of our people in order to boost profits and pay off bankers.

Can staying in the UK change this? The evidence of the past forty years is evidence itself.

Can an Independent Scotland change this? I believe so, as the people of Scotland have been proven to vote for fairness and increasingly so, from election to election.