Is the BBC telling you what to think?


There seems to be a split in opinion amongst people over recent changes to fundamental rights.  Some people seem to accept changes to our society that to others are sinister and unacceptable. 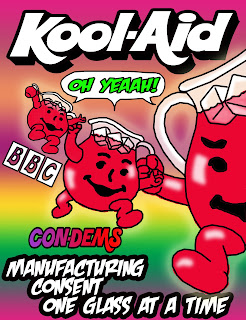 Some people say that these changes are inevitable as we have "been over-spending."  Others recognise change will lead to ordinary people paying for services we were given through our tax system - a tax system that reached its zenith of fairness in the 1970's - but a system the Tories and the corporations who drive their ideology, recognised prevented them from further profits.  "Overspend" is, of course, part of the language of the right which when stripped away, actually means tax money spent on those who need it rather than the arms dealers and those who want to exploit our tax system, such as the PPP/PFI corporations.  "Stagnation" and "growth" are their language - language that leads directly to the financial and ecological disasters that capitalism inevitably brings.


Why is there such a divide in opinion over fundamental change in our society?  Why are people accepting changes that increasingly mean that ordinary people are less likely to be educated to degree level and are leading to treatments we currently receive from the NHS being available only to those paying for extra insurance?


I would argue that the ownership and control of the media, and their "manufacturing of consent" can explain a huge amount of the apathy that is leading us to a more expensive and less free society and a society less likely to critically analyse.  The language the media chooses to use is hugely important.


The fear of negative publicity and shareholder flight meant that the Murdoch controlled media outlet offered no critical analysis of the scandal after its recent confession of phone hacking.  Anyone watching the 24 hour news station wouldn't have known that it had confessed to hacking at all. Sky News unquestioningly uses the language of the Tories - today, as I write they are quoting Chancellor Osborne as being "shocked" that rich people avoid paying tax.  I wonder if any of the Osborne family cars and buildings are offset against their company tax?  I wonder if any of the top share-holders in Sky offset items in their tax returns?  What journalists are in senior positions in Sky, the BBC or the print media who have used hacking as a means to get information?  There was no analysis of Osborne's shock on Sky.  They have done nothing to have these legitimate questions answered.   But what is more shocking is that there was no proper analysis of this faux shock on the BBC either.


In my opinion, the only way our media can be publically accountable and reliable is through a publically owned, publically policed news service.


"Our" BBC is owned by UK PLC, but recent stories and the adherence to the pro-profit ideologically driven Tory line has exposed the inadequacy of the power structures that control the BBC. Let me say, before I go on, I am a huge fan of a national broadcaster that is not driven by the profit motive, though I don't doubt for a moment the threats from the Tories on BBC budget go some way in shaping content.


To take one instance of how overt the seeming adherence/compliance to the neo-liberal/corporate Tory line is, take the use of the word, "reforms." This word has been used to replace the words "political change" to our services, for example, Education "reforms" that are anything but, according to the majority of educational professionals - many of the protests against thechanges to the English education system have gone largely un - or under - reported (like the scandalous forcing of schools to be Academies).

And of course, NHS reforms that have been passed to the disgust of most doctors and nurses.   There were demonstrations against these changes to our NHS - some of the recent ones policed in a way the UK hasn't witnessed since the height of the Northern Irish troubles  - largely un-reported by the BBC, Sky or the UK print media (Police were issued with machine guns!).


The argument that Scotland was subsidised by London has been totally destroyed, and in Scotland has moved on, , yet this is never reflected in how the BBC report the unionist "case."  We also see Danny Alexander and Tory MP David Mundell on BBC news commenting on Scottish independence as if they represent some sort of equal voice on the subject here.  This is patently not the case, as Mundell is the only Tory MP- in Scotland, and Alexander is part of a coalition in Westminster that Scots did not vote for.  If the BBC were doing its job properly, the voice of the pro-independence parties would be heard much more clearly as they are very much in the majority.

According to the BBC over the past few years, we are all cap doffing royalists - and to say anything against this love-in of Wills and Kate etc is almost to be likened to Satanists.  Where did the voice of the other very British/ Scottish/ English institution, the "Republican" suddenly go?

And to say the equivalent of Wilfred Owen's Dulce et Decorum Est about our troops in the Middle East invites scorn and accusations of "traitor!"

Democracy and critical thought is only possible with an informed electorate.  If the press and rest of media are driven by fear of shareholders, or fear of government interference, then democracy has been compromised.  The use of the positive word "reform" to mean change in the face of the fact, at best, we don't know what the outcome of these changes are, suggest that the BBC should be taking a neutral stance in its use of political language in its reportage.

Sky nor, regrettably, the BBC are being balanced.  They are adding to the mis-information sent out by the pro-profit newspaper proprietors.

Thanks to Thee Faction for permission to use their video.
Posted by Neil at 13:27