You know the type. Trendy man bag slung over his shoulder. Beaming smile, scrubbed face. Advocates growing own vegetables, but doesn't yet, and won't touch a Kit-Kat because "Nestle kill babies." And recently has been bubbling about a really cool video showing the terrible things this guy in Uganda is doing to children. And is calling for US military intervention in Uganda in order to help the Ugandan Government to get this man Kony. Until recently I didn't fully understand the danger suggested by the term "slactivism." Slactivism is dangerous, and reactionary and at it's worst can justify imperialist adventures and oppression. 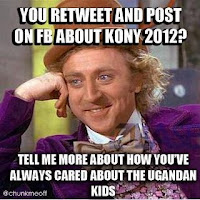 Slactivism seems to be a term meaning someone who jumps from cause to cause- each cause being, to the slactivist, as worthy as the next, the slactivist giving little thought to the cause beyond, "it looks worthy." The term could, at its least dangerous, be given to people who loosely link causes together and change focus regularly. Each cause is, at least on the surface, one that can be supported by activists, each cause bringing with it a new meme or a new trendy logo and visuals. The more links on the internet, and the more trendy Youtube videos attached or witty banners etc, the more attractive the cause will be to the slactivist. But its seeming worthiness is its inherent danger as imperialist Governments and oil companies take advantage of the slactivist's lack of focus and critical thinking.

Back in 2005, we were told that clicking our fingers would "Make Poverty History." Bob Geldof, a proven tax dodger, said that sharing some money and wearing a white teeshirt would force Governments to drop the 2/3's World Debt. Of course this altruism does not extend to the poor in his own adopted home - welfare projects and education and health benefit lightly from his taxes as he has found out how to hide money in properties purchased abroad. Bono and his pompous band are the same - Ireland is in huge crises - poverty in his own country is increasing hugely, but to him, his tax millions are better in his own offshore accounts. Slactivist after slactivist clicked fingers, pounded the streets of Edinburgh, listened to Annie Lennox and wore out white shirts. Geldof and Bono ensured that protests that had been organised months in advance of the G8 that year, were able to be labelled "bad protests" - and at one point, the Scottish Government had been able to capitalise on the de-politicisation of the protests by the rock gods and a smiling Blair and Brown and were going to shut down a pre-planned non-Bono/Geldof initiative.

Poverty, to the Bono and Geldof encouraged slactivist, would disappear if we paraded around Edinburgh in white, sang along with Annie Lennox and clicked our fingers. Polite cheering on Bush Blair et al would induce massive change; pull the 2/3 world from poverty and not really have any effect on us other than be out of pocket on a white rubber wrist band and a sore arm from waving a placard sponsored by the Daily Mail. Geldof and Bono are two characters who are stranger than strange - both from rock bands that in some way de-politicised music in the pretence of politicising it (the subject of another article methinks) and both very much friends with those they were asking to make change - ie Blair, Brown and Bush et al. The point here is that poverty was not made history, and in fact the continuance and depoliticizing of the message to the G8 that year actually allowed the powers that be to make more protections of the system that ultimately failed in 2008 and created even more poverty. Tax dodgers Geldof and Bono at the very least, are guilty of the worst slactivism in history. 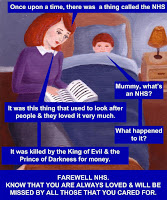 A slactivist has three massively detrimental personality disorders - these disorders can have a huge negative impact on real issues. One, a sense of righteousness; two, a laziness and three short-termism. They have an ideological deficit- they see only black and white in all situations and have no "hook" - no ideological or principled measure of how right a cause is - no in depth analysis or critical thinking. The slactivist will label him/herself with something that will sound liberal, yet in some way make the pretence of challenging the status quo. The most recent "slactivist" I have been talking to has labelled herself, an anti-imperialist, atheist red capitalist. I told her she was not an activist then -she was supporting the inequalities that the present economic system needs. As the capitulation of the Lib Dems in venture capitalist driven Tory policy after policy has shown in the UK, compromise with capitalism drives the living conditions and wealth of the working class and poor downwards. Millionaires and billionaires are benefiting more and more through Liberals democrats compromising between the wishes of the very rich (about 2% of the population) and the wishes of the rest of us. Poverty in the UK is being dressed up as necessary cuts. If you are working class, all you see around you are people struggling with heating bills, electricity, food and rent or mortgages. The rich are rubbing their hands in glee as the capitulation of the slactivist Liberal Democrats allows them to increase their incomes exponentially at the cost of the rest of us. 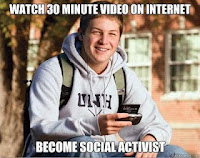 Occupy and UK/USUncut, are fast fading from view, Julian Assange is slowly being forgotten and Anon masks will be last weeks thing in the coming weeks - slactivists are moving on to the next big thing. Iran nor Palestine aren't trendy enough (they have too many of those Arab looking people) - and the Tory wrecking of the world renowned and admired UK NHS is a bit boring, but this Kony guy has a name like Sony and the video created by these IC (JC?) people is like far out man. It has everything. Disfigured children, raped women fantastic visuals, a rocking sound track and a charismatic leader holding guns in the Jungle - almost Che/Jesus-like, but without unfortunate reference to that old fashioned socialism/sharing stuff. Recently a friend has been punting the Kony 2012 cause in a local group, organised through Facebook. This slactivist has no qualms in supporting "No Attack on Iran," though this has fallen in "trendiness" and the media blackout of the Iran crises and lack of slick video has ensured he would rather focus on a cause that is extremely dodgy. He can't seem to see that calling for US troops to help a repressive African regime is in any way similar to what he is rejecting for Iran. There are the resources out there to aid critical analysis, if only the slactivist would go beyond the charismatic leadership of IC and well produced videos. Resources that not always come from the old fashioned, cynical left (this resource is a good one - but will not convince the slactivist as, 'didn't socialism become as bad as Hitler in the era of Stalin and stuff..?' ) But even the mainstream British media has become more than cynical about this "movement." Other useful links: HERE and HERE 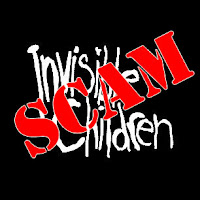 Of course, the Invisible Children crowd and slactivists who don't like to be wrong are on the attack, saying this cynicism is going to allow Kony off the hook (which he definitely shouldn't be), but what they are calling for - ie. US intervention supporting a despotic regime that uses child soldiers openly is way short of what Uganda deserves. It was way short of what Afghanistan and Iraq deserved - the peoples of those two countries were butchered and continue to be because of US strategic interest (as most will accept, the involvement of the US in Afghanistan and Iraq has helped destroy these countries rather than help to build). What is the common denominator in these countries? The discovery of and supply of oil to the US. The profit bottom line. The fact is, Kony disappeared from view and out of Uganda six years ago. My slactivist friends don't seem to be able to recognise that supporting the Ugandan government is supporting a government that is oppressive and actually uses child soldiers. Supporting military intervention and the Ugandan government is going to pit child soldier against child soldier. Amnesty International recognize this and have asked the USA to stay out of this regional conflict.

The first principle of a Doctor is, "Do no harm." The USA decision to be the "healers" of the world should be treated with the cynicism it deserves - because the ill patients it seems to try to cure are harmed beyond healing in the coming generations - and the healing will not really take place until these exploited lands run out of oil - nor are strategically important by way of geography. Kony is something that the US government and big Oil loves ie. a bad person who may take years to find, but in the meantime they can slowly build bases within Uganda and prop up the Government that is every bit as bad as the dreadful Kony. Some of us have put the two and two of "get Osama" and the militarisation of Afghanistan together and made the 4 of the decimation within that poverty stricken country. The US has no qualms in propping up despotic Governments to pipe oil across continents to ensure profits increase and in doing so, many thousands of innocent people have lost their lives, livelihoods, children and parents. Slactivists should stop propping up the despotic US military machine and perhaps tighten up their critical thinking.
Posted by Neil at 11:03