Not a review. Reviews are Bourgeois

One positive thing the current Tory/LibDem coalition is doing here in the UK is boosting protest rock and pop. To look at the charts you wouldn't think it- but unlike back in the eighties when for example, The Clash, Paul Weller and The Specials could make it in to the charts with anti- government songs, nowadays the charts themselves (and what music is deemed fit to be part of them) are controlled by the music corporations through the Entertainment Retailers Association and The British Recorded Music Industry ran "Official Charts Company." Those who control the corporations are unlikely to allow mass dissemination of something that nowadays truly "shouts to the top," especially in an epoch of squeezing the last drop of exploited profit from chanteuses' and boy bands with a shelf life of a couple of years. Most of the protest music is outside the charts... 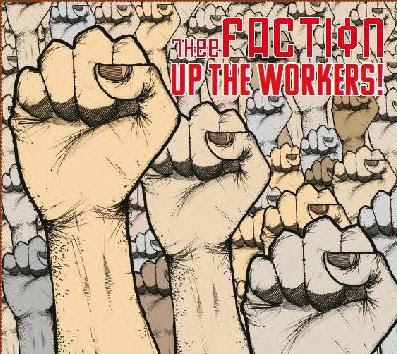 For this reason we are unlikely to see "Thee Faction's" second album, "Up the Workers" in the UK charts - the other reason being that this group do not see themselves as a group in the sense Echo and the Bunnymen or JLS are groups. Thee Faction see themselves as a guild - a collective who create, market and sell the fruits of their members labours for a fair price. A fair trade, socialist guild. A group unlike some of the groups of my youth who promised much, but have disintegrated or ossified without delivering. Or worse still, have taken the money , thanked the fans and now lie beside their Californian pools, calcifying their arteries with the stolen spoils from disaffected, optimistic youth. I sound bitter, and perhaps I am. Ian McCullough nor Jim Reid have led the revolution and Morrissey has become as establishment as spam and The Big Yin's bum joke.


You see, I was a political indie kid back in the eighties. Unlike the Goths and the desperate, dispirited youth of today, the indie kids of the eighties, us Thatcher hating, angry young people, had hope. We had groups and singers who even if they didn't sing political lyrics, the movements they seemed to be part of seemed to challenge the status quo. Even Spandau Ballet not only had a name influenced by the most infamous political prisoner in history, but they released an album influenced by the Troubles in Ireland.

Thee Faction was a group in those days who along with the more famous Red Wedge collective, spat and shouted at the conservative mayhem meted out on the population of the UK. The Beat sang, "Stand Down Margaret." Elvis Costello, "Shipbuilding" and "Tramp the Dirt Down." Billy Bragg promised us a "Great Leap Forward," Dammers "Specials" warned the world of the Ghost Towns created by the monster that was last ditch capitalism and the Smiths wanted to chop Thatchers head off in "Margaret on the Guillotine." Thee Faction implored people to join a union and railed against the capitalists manufacturing consent through keeping us ignorant. (See HERE for a review of their first album "At Ebbw Vale.") 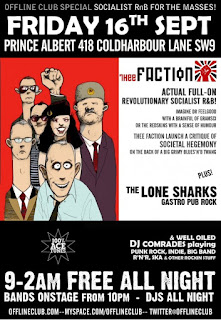 Alexis Petridis, rock music critic for the Guardian said of the 1980s, "Britain was turning, in a really dramatic way from the liberal, post-war consensus. Thatcher was far right enough that the National Front vote collapsed. [Thatcher] was a very easy figure to demonise." But then Petridis also said, when asked if a similar wave of anti-government sentiment would ever stir the music scene again, "People are pretty much contented with their lives now." To be fair that was a few years back when New Labour was giving the people just enough to keep them from rioting. Now we have a vicious Tory Government who is seemingly unafraid to throw more and more people into the clutches of poverty in order to feed profit.

And we have a re-awakening of interrogatory culture. As Thee Faction say on their sleeve notes, "Bourgeouis "Lyrics" will always lead up a cul-de-sac... [we] strive for a pure aesthetic with meaningful communication and a sense of beauty."

Thee Faction are a lesson - an independent spirit, who cannot be identified with Thatcherism in the way the independent labels back in the eighties could be. They own their means of production. They Rock for enjoyment, and they rock to share an interpretation of the world that we need nowadays - one that also shows an alternative path. Real alternative music that sings, "Capitalism is good for corporations; that's why you've been told socialism is bad all your life."

Guthrie and Seeger, Lennon and Baez, Dylan and Crass changed views through song. Thee Faction do just that through sheer force of polemic, joy de vivre; fun. 366, their opening track, shouts at us that we have to be unafraid to speak out. Be a nonstop agitator, 366 days of the year - shout to power - until we have a competent economic system right here! Deft Left tells those who may have thought we had gone away to look again - we are still here regardless of the onslaught by the capitalist press and media. It opens with the lines, "what happened to the anger, when we were fighting Mrs Thatcher ... we are going to make a new start..." and now is the time to do that. 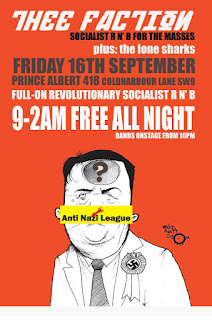 The Left are coalescing in the fight against the cuts in local "Save Our Community Centre" type organisations, through to the UK wide, Coalition of Resistance and the strengthening unions (lets not forget that Unions are the biggest working class organisations we have, even after the Thatcher/Major/Blair years of attack and anti-union legislation). And Lefties can still coalesce around music.

Music is dangerous - as the frequent banning of records and bands through the eighties and nineties should illustrate. Bands challenging the ideas of the ruling class like Crass or even Frankie Goes to Hollywood were kicked off the middle class Radio One airways. The Sex Pistols could not be seen to be the number one rock group of 1977 as they were challenging the accepted hegemony - that of "we the British People LOVE our Queen!" Frankie was holding one defiant finger up to Mary Whitehouse and the middle class ideas of hidden sex - wrong sex - outlawed sex. Our country is very much a country dominated by the ideas and sensibilities of the class that control all. In fact this can be said of the Neo-Liberal, globalised capitalist world we live in. Conservative ideas rule supreme, and Murdoch, Lord Rothermere and Richard Desmond ensure, to paraphrase Marx, the rest of us who have no way to disseminate ideas to the masses are subject to the ideas of the rich and powerful. Cameron et al are recognising this hegemony is under threat, and already calls for social networks to be closed down during times of civil unrest are becoming the thoughts that are being promoted as the ideas of society. This is a plain lie. Society wants and needs a more democratic media - and it is creating one. Society is bigger than Cameron, Murdoch and the marketplace. Thee Faction have recognised this and sing about our state of being - "you are just a Customer, you consume..." consuming all, we are told is what we need. The illusion of choice. 25 different but the same washing powders sold by the same two companies. More anti-union laws. More anti-young people legislation. More censorship. More Cowellesque pop nasties. They only rule supreme because our legislation protects property first and profit is the new god.

Thee Faction warn the Tories not to make us Angry - we are not going to be fooled any more that we are "all middle class." Fewer and fewer people are fooled as more and more people realise they are paying for the bankers crisis. £700bn of our hard earned taxes bailed them out. They have paid us back only £2bn, yet still ensure they get hold of bonuses that most of us won't accumulate from our main salary/ wage in twenty years of buckling down and accepting the guff that "we are all in this together."

What's the solution? Well, Thee Faction has one. They are not wallowing in the now. They don't sing of the current dystopia and leave it at that. They believe industry should be controlled by the unions - or guilds - worker collectives. They believe we should challenge the current hegemony and they believe we should be coming together in socialist political parties to do that. Their songs are permeated with references to the Socialist theorist, historian, economist and writer of detective novels, GDH Cole, a man whose ideas are worthy of promotion. A man who once said, "I became a Socialist because, as soon as the case for a society of equals, set free from the twin evils of riches and poverty, mastership and subjection, was put to me, I knew that to be the only kind of society that could be consistent with human decency and fellowship and that in no other society could I have the right to be content." A man who so hated capitalism, he would not accept interest on his money from the bank. A man who wanted the capitalist system smashed. A man who said socialists should not give up being levellers. Something the current Labour Party seems to have forgotten (amongst a few other founding principles).

One of my favourite songs on the album is "Only," sung by Kassandra Krossing. "Voting on its own wont set you free. Smashing Starbucks windows wont set you free..." timely lyrics in the time of the coalition Government made up of the Tories and the party people voted for so they could protest against the Torification of the Labour party. A time when people are totally dismayed by the capitulation of the Liberal Democrats to the vicious austerity the Tories are imposing on working class people. A time of continued unrest from student riots through to the police violence sparked/ consumer/customer themed riots a couple of weeks ago. "I want to wake up in a world where no one has too much... voting alone won't set you free, nor will singing this little song along with me..."

Perhaps the kudos of Mike Reid or Mike Smith banning a record won't set us free either.

Thee Faction URGE you to do something - whether it be joining the party or agitating 366 days of the year or dumping your Conservative, UKIP friend. "What you have here is anti-capitalist music... Wage Labour? Their idea. Boom and Bust? Their idea. The waste, the inefficiency, the boring illusion of choice, ALL THEIR IDEA. You want Life Liberty and the pursuit of happiness? Join our party." I agree. "Up the Workers."

This record is a joyous celebration of socialism a definite five red stars from this reviewer... or are reviews bourgeois?

I disagree on one political point on the record only, and that is, feedback is NOT bourgeois.

The Jesus and Mary Chain were banned by the BBC twice, comrades.
Posted by Neil at 18:51