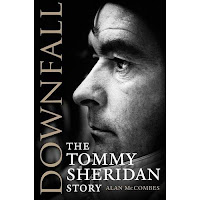 On reading James Doleman’s review of Alan McCombes book, “Downfall,” I have to wonder, did he and I read a completely different book? Like all of James involvement with the SSP, it is a definite dodgy dossier he has concocted.  His criticism is made by selecting detail from the case in order to criticise not the book, but some of the detail McCombes inevitably had to leave out (only, perhaps, a self confessed “nerd” like Doleman could have read a book full of the kinds of details he mentions – the resulting tome surely would have made Downfall double the size of War and Peace!) The details of the case are available elsewhere – McCombes account was a personal view from someone who not only knew Sheridan, but wrote his articles and produced his press releases.

Unlike Doleman, I was here, in Scotland, a member of the SSP during all of the major incidents this book portrays. Unlike Doleman, I sat through SSP Regional Councils in which Keith Baldassarra begged Sheridan not to go through with his reckless course, only to be told, “They have nothing on me.” Unlike Doleman I was here, in Scotland for the original case, and seemingly unlike Doleman, I have spoken to members of his own political faction, the SWP, who admit they knew what Sheridan had done, but had been told by their London Central Committee to hitch their harness to “the mothership,” (their words). Unlike Doleman, I have spoken to ex-members of Solidarity who enthusiastically had gone with him out of the SSP in order to, and again in their words, “be MSP’s.” People who knew he lied – and in fact were told by him this fact. Some have expressed regret – and some have made moves to rejoin the party – or at least acknowledge the fact that the battered SSP is Scotland’s only remotely viable Anti-capitalist, Socialist Unity vehicle at the moment. Unlike Doleman, I was in Scotland and a member of the SSP on the lead up and during the split – I attended meetings of the SSP were one or the other faction was prominent, and some where people were abused for not backing Sheridan and his want for adulation both in the Scottish media and within the party.

I joined the SSP after following the fortunes of the Party – and after attending meetings and then voting for them in 2003. I decided to join after Tommy was joined by five other MSP’s in the Scottish Parliament. I was an ordinary member – unlike James, I was not aligned to any platform or left sect ideology.

I hadn’t always liked Tommy’s style, and in fact always thought his style of rhetoric was not only old fashioned (I had been brought up amongst shouty politicians in Northern Ireland), but very clichéd – his constant – sometimes tenuous - references to John Lennon and the song Imagine always made me cringe, for example. But his success in the first Parliament and the success of the party to go beyond his one man show impressed me enough to join.

On joining, I learned about the structure of the party, and of the various “platforms” within it. Doleman was a member of the SWP – a London based faction mostly made up of students and teachers. Their strangely middle class make up is due to the way they recruit – usually at universities. Other platforms I investigated were the SRSM, a group of socialists who put “independence first,” and the CWI who were the remnants of the group that had been expelled from the Labour Party in the 1980’s, Militant Tendency. The largest platform in the SSP was the ISM, which was the biggest faction remaining from a split in the CWI. The ISM dissolved itself into the party. This group included people I went on to admire politically, people like Richie Venton, the union Organiser of the Party; Alan McCombes, Colin Fox and Tommy Sheridan.

I found the SWP and CWI factions full of their own importance – and in the case of the SWP, I found them patronising and totally devoid of any connections to real working class people. During the G8 preparations I overheard prominent members of the SWP group discussing the fact that most young people in the party supported Scottish independence – they dismissed these people as “misguided” or “barely educated.” I witnessed at various conferences their snide remarks from the floor (during the huge conferences the SSP were having between 2004-06 while Doleman was in New Zealand).

The CWI were a little different. I met their organiser, Philip Stott on a number of occasions. Our first meeting was in a bar in Glasgow. I sat and sipped a pint as Stott basically lectured me on what a good Marxist and a good Marxist organisation was. I could see, like the SWP, this was not to be a two way conversation. The CWI “analysis” was THE analysis, and moreover, Stott as the organiser and propagandist for the Scottish carload of members, had all of the answers. As an aside, I also met Peter Hadden, a northern Irish CWI organiser – and, at the time, liked his analysis of the Northern Irish peace process, and the CWI proposals for a New Ireland. I proposed in my SSP branch that he should be invited to speak at a “Socialism 200?” meeting (I cant remember exactly which one- but at a guess 2004). When he came over from Ireland, Stott, Hadden and I sat in a bar in Glasgow for what was to be another shot at grilling me, but when I told them why I disagreed on their analysis of Scotland and the Scottish Independence issue (the CWI were against independence) I watched as they signalled to each other that I was beyond their clutches – I was a lost cause and they would not be able to recruit me! This was typical sect behaviour. You are not a member in order to think. You are a member, so you listen to how you should think.

Although the SWP have distanced themselves from Solidarity and Sheridan, the CWI have found this more difficult. I believe this is because of the small size of the Scottish branch of the CWI – they need something bigger to hitch on to – the problem is they hitched to the wrong vehicle. Rather than listening to the majority of working class people who made up the SSP, the CWI decided to tweak its internal analysis to one of “we should lie for a socialist in a capitalist court” (an excuse later used by members of the SWP). This tweaking was done so they could soon have members in the Scottish Parliament on the back of the "socialist icon," Sheridan. The problem is, their history has been so changed and tweaked by Stott’s “analysis,” they find it difficult to admit their knowledge of the fact that Sheridan lied (and tried to force his party to lie), not for any political reasons, but in order to keep the mahogany veneer of the socialist messiah- and in my opinion, to save Stott’s job.

What their analysis fails to do nowadays is face up to the fact that Sheridan is now a complete pariah to the Scottish electorate and to the working class people who have been desperately let down by yet another lying politician. At least the SWP privately acknowledge that – yet cannot seem to take the logical next step and admit their folly. Perhaps this has more to do with rallying around their members who may have perjured themselves in court.

The sad thing is – the left will never make gains if it cannot admit where it made mistakes, or expel wrong doing or wrong doers. The “left” is no better than the right if it is lying to those it purportedly represents – and the fact is, the class know they have been lied to. The unelectable status of the anti-capitalist left in Scotland will continue if vociferous organised components cannot even admit their knowledge of one man’s lies. The message of the left is still being drowned out by the fogging of Sheridan and his fans.

Frank Doleman, as he was known when he was a member of the SSP, is trying to forge a career in “Tommymania.” His articles and tweets and reviews are becoming as mad as those coming from Philip Stott from the CWI – only the difference is, Stott is almost intelligently covering up his own Tommymania by interpreting all around him through his own David Koresh style lens of “Marxism.” Stott is justifying his London salary as Scottish Organiser of the CWI/ Socialist Party/Socialist Party of Scotland, or whatever they call themselves this week. This is managerialism perhaps not quite on the scale of the manager class within the Soviet Union who stymied progress in order to hold on to their wee bit position – but he is stymieing progress of the organisation he represents.

Doleman is just hitching his wagon to the mothership of Tommy – but for what reason? There is no doubt Doleman’s nuanced blogging of the trial – and his careful editing of comments made each day (something he and I clashed over on twitter), enamoured him with the Sheridan’s. During the trial, Tommy's mother, Alice - along with other members of Tommy's family, was seen many times, greeting “James” with a hug and ensuring the blogger had a seat.

Doleman is now sure of access to Tommy in order to write his eagerly awaited fanbook of the inmate of Castle Huntly Open Prison . His constant fogging of facts – a device used by Sheridan himself during both trials, is only a self serving one – one that makes this story run further in order to increase his “fame” as a blogger/writer on Tommymania. Doleman won’t make a fortune out of a book, and won’t make a huge amount writing in the papers. But I guess it is something for him to do (he was unemployed during the trial, hence his ability to attend court most days), and it gives him a wee spot in the glow of the decrepit tanned one.