For the background to this book, please scroll down.
Click on each page to read, and then backspace to come back. 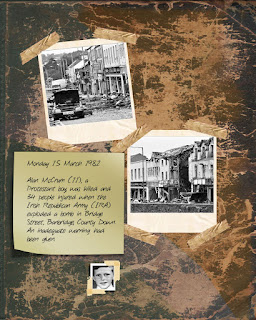 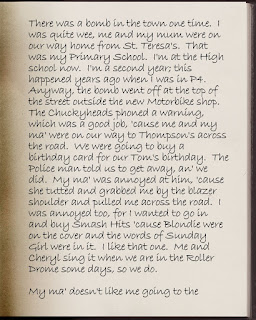 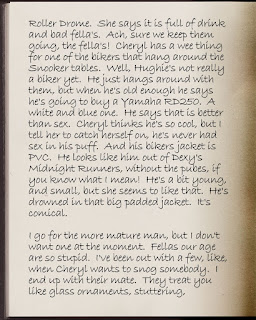 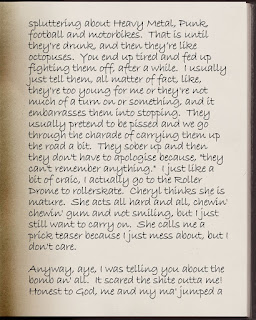 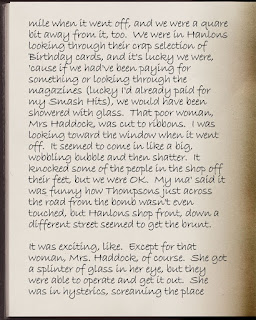 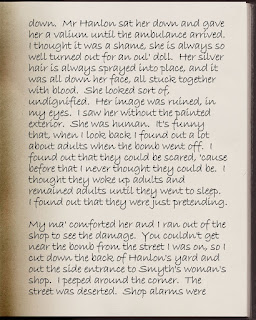 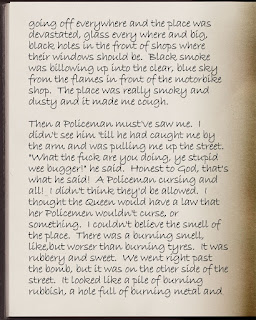 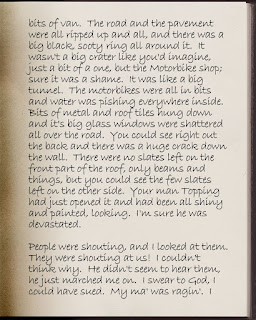 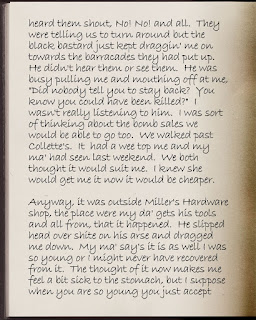 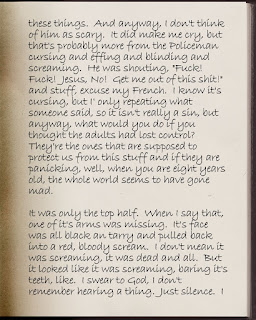 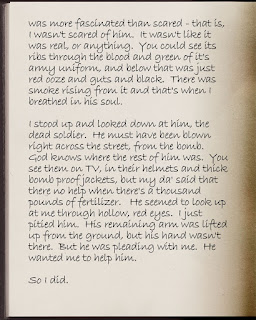 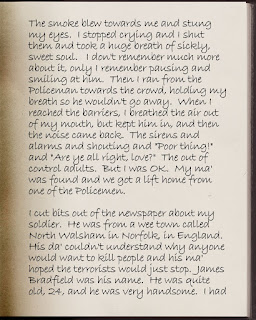 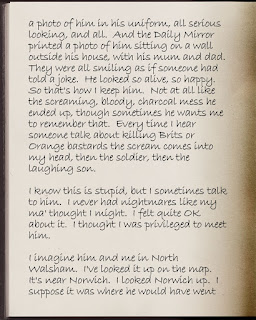 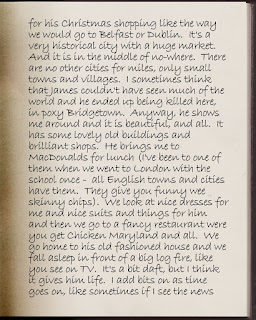 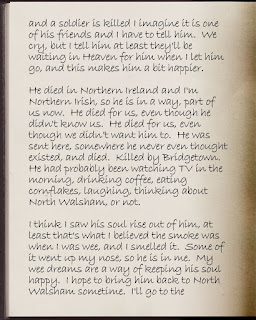 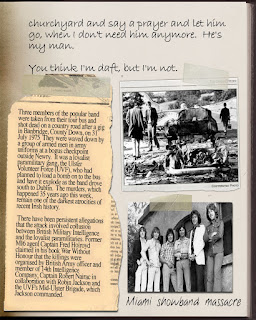 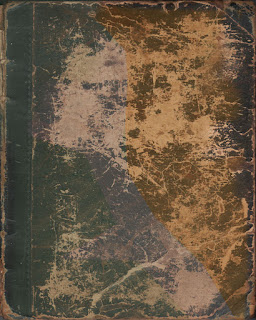 The voice I have used in this fictional account was influenced by many people I have known through the years I lived in Northern Ireland.
I was brought up in South (County) Down in Northern Ireland and lived through the bulk of the troubles.  In fact, the first cease-fire came just as I left to live in Scotland in my mid-twenties.  I visit my old home town five or six times a year, so some people would say I have never left!  But the few hundred miles west is a step outside the mindset of sectarianism that permeates the province at all levels (whereas sectarianism in Scotland, although existent in the Central Belt, and in particular the west, I would argue, is not just as embedded in the structural social systems across the classes).
The sights and sounds and smells in Grainne’s story are informed by my experiences.  Although having been brought up in the “Ring of Steel” – an area of Northern Ireland that was allegedly protected to a higher degree than the rest - the terror was at times driven in in car bombs and shootings.   And of course, my life, especially as I got older and had independence, went beyond the ring of steel into some of the areas where one side or the other was more prevalent.
I spent time amongst Nationalists, Unionists, Republicans and Loyalists; some of the people I grew up with and drank with were witness to and took part in some of the most heinous crimes of those dark days between 1969 and the late 1990’s.
And I had and still have, superb friends across the sectarian divides.
Sectarianism and bigotry are the two enemies of sense.  When one “side” feels superiority over another, whether that is by way of “true knowledge or way,” politically or religiously, then things get dangerous.
The sectarianism and the callous murders of Catholics (and the infamous murders of the Miami Showband    in Northern Ireland, known as “The Day the Music died”) carried out by the vicious Glenanne gang , led directly to me hearing my first bomb while in the living room of my ageing grandmother, and witnessing firsthand the grief of a family, my family, as victims of the travesty that was to become known as the “Troubles.”   This same sectarianism and disregard for life led to the death a school friend, a few years my junior, when a car bomb was left outside the shop owned by a family friend while the eleven year old waited for his father to collect him after a day at school.
During my childhood I was caught up in the aftermath of bombings (and on one occasion was a few hundred yards away from one that exploded, but thankfully on that occasion, property was the only casualty), found ordinance and was caught up in various incidents of the troubles.  I was told my best friend was a Catholic, not knowing there was any difference, and then spent a lot of our time together trying to gauge differences.  I concluded “they” liked Cream Soda and “we” liked Sarsaparilla.  I waited behind curtains, looking worriedly out into the night when the local TV news reported “incidents” in Belfast, and my father was late home from his building work in the heart of the troubled city.  I was subjected to phone calls from nasty, vicious people who did not want my father working in “their” area.  I was beaten up for my beliefs, shunned by “one side” because of my mixing with “the other” and had my ignorance challenged by inspiring people.
My experiences in Northern Ireland have led me towards left politics – the politics of fairness – and also towards unity with as many comrades, brothers and sisters I can in the fight against those who use their money and power to trod us down.  In RL I am a member of the non-sectarian left unity party, the Scottish Socialist Party and I am a founding member of SL Left Unity.
This story was written by me a good few years ago, but I had placed it HERE.  Trill Zapatero, a friend in Second Life, read the piece and asked if she could create a book for it to be placed in Second Life's "Zinn Library."  (I'll blog about the library another time - it's official opening will be soon!) So - if you are in second life, take yourself to the Four Bridges Project and go in to the Zinn Library, and thanks to Trill and Millay, you can read this as well as many other books.  It is a great honour to be associated in this small way with Howard Zinn - and I thank Trill from  the bottom of my heart.
Zinn, if you do not know of him, is well worth looking up.  He was a great man - and one who has helped open up real discussion in the US about real politics again.  In 2009, he said,
"Let's talk about socialism. I think it's very important to bring back the idea of socialism into the national discussion to where it was at the turn of the [last] century before the Soviet Union gave it a bad name. Socialism had a good name in this country. Socialism had Eugene Debs. It had Clarence Darrow. It had Mother Jones. It had Emma Goldman. It had several million people reading socialist newspapers around the country. Socialism basically said, hey, let's have a kinder, gentler society. Let's share things. Let's have an economic system that produces things not because they're profitable for some corporation, but produces things that people need. People should not be retreating from the word socialism because you have to go beyond capitalism."[53]
Posted by Neil at 14:13